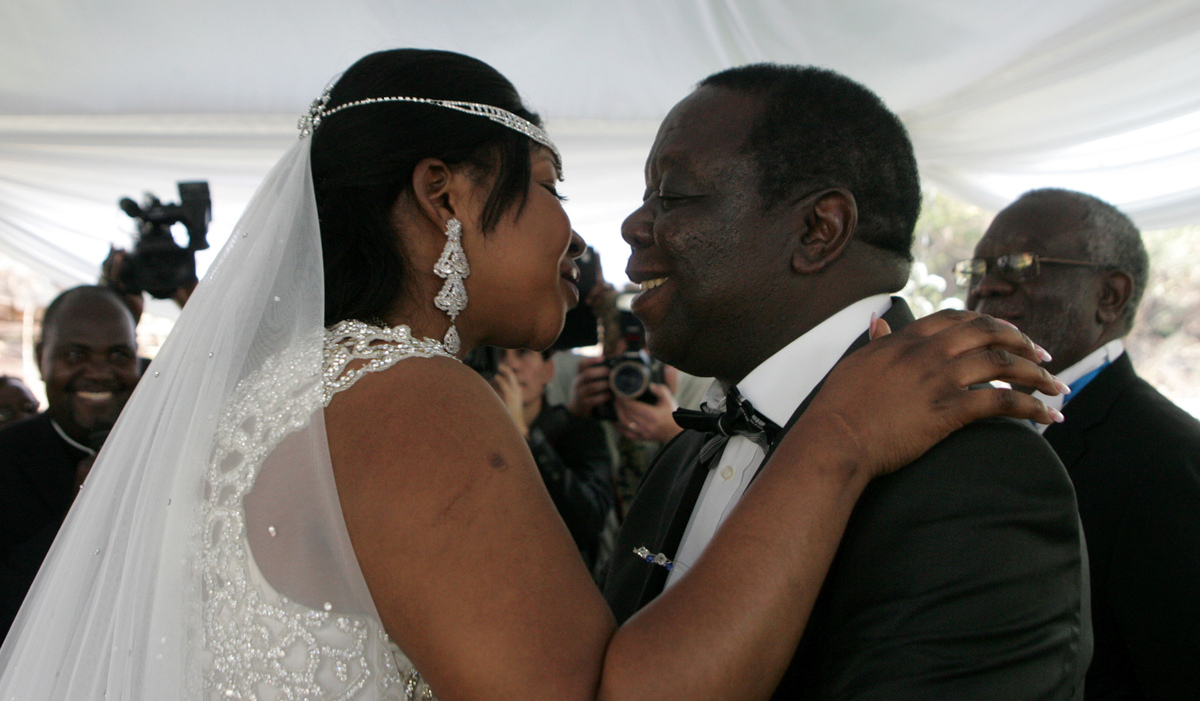 EMBATTLED MDC-T leader Morgan Tsvangirai’s widely reported ‘medical condition’ that has led to the breaking down of his marriage to Elizabeth Macheka has been linked to the former Prime Minister’s cancer related spinal cord ailment that The Patriot exclusively revealed last year, it has emerged.
Impeccable sources this week told this paper that Elizabeth indicated her former husband could not ‘perform’ his conjugal obligation due to the problem hence her decision to leave their Highlands home.
Elizabeth, it also emerged, has since relocated to the plushy Philadelphia suburb in Borrowdale.
There are also fears that Tsvangirai could have been ‘locked’ after he abused and abandoned many women.
Last October, this paper revealed that Tsvangirai had spinal cancer which developed after injuries he sustained in a car accident in the early 1990s and last week Macheka told a local daily The Herald that the undisclosed, but ‘sensitive’ medical condition was behind the collapse of her marriage.
In our report we highlighted that Tsvangirai’s frequent visits to Nigerian ‘Prophet’ Temitope Balogun Joshua’s Synagogue Church of All Nations (SCOAN) were a result of the cancer related ailment.
“It is also alleged that Tsvangirai’s visit to Nigerian ‘Prophet’ Temitope Balogun Joshua’s Synagogue Church of All Nations (SCOAN) besides seeking solutions to his political woes, also sought ‘healing’ of spinal cancer that developed as a result of injuries the MDC-T leader sustained in a car accident in the early 1990s,” reads our report in part.
“Tsvangirai’s close sources said so dire is this situation that he now uses pillows to support his back when travelling.”
MDC-T strenuously denied that Tsvangirai was suffering from spinal cancer at the time.
As if to confirm our story, Elizabeth told The Herald that Tsvangirai knows the ‘genesis’ of the problem, amid reports that it was the problem with the spine that inhibited his virile ability.
The paper reported Elizabeth denied that politics and her husband’s defeat in the July 31 elections were responsible for their problems.
“A lot has been said and written about how I am to blame in the current situation between myself and Mr Tsvangirai. It is not my intention kufukura hapwa, kubvisa matenga akafukidza dzimba or awaken sleeping dogs,” she told The Herald.
“He (Tsvangirai) knows the genesis of the problem, what steps he has been trying in vain to address the situation, including visits to TB Joshua and others.
“The paralysis between us has nothing to do with the outcome of the July 31, 2013 elections, MDC-T, any other political entity, foreign hand or material worth.
“The matter is both personal and circumstantial and only him not even relatives, friends or party comrades can solve.”
Elizabeth also castigated Tsvangirai for ‘crying’ victim of their problems.
“Crying the victim or casting aspersions on anyone, including myself, is not only a self-serving sympathy-seeking gimmick but intellectually, factually and morally dishonest stance to take as close friends from both sides of the families and relatives know,” she said.
“I shall not be drawn into a public discussion of my marital life since it is a private matter and private matters are best solved privately.”
Sources said Tsvangirai had been suffering from the ‘problem’ for a long time.
One of them alleged that when he was still close to the party secretary general Tendai Biti, the latter would be sent to Mbare to buy performance enhancing herbs known as Mutundowebveni (Baboon’s urine).
“I can confirm to you my brother that indeed mudhara (Tsvangirai) vane problem yemusana and that could be the reason why Elizabeth dumped him,” said the source.
Another source said there were murmurs in the MDC-T corridors to the effect that Tsvangirai only ‘gets it up’ with Leah Mhundwa.
“We have heard it here (Harvest House, MDC-T headquarters) that Tsvangirai could have been locked after he refused to take Leah as his wife following the death of Susan,” said the source.
“We have also heard that he (Tsvangirai) only gets it up with Leah and that she is carrying his child and that the pregnancy is said to be six months old.”
Tsvangirai who has since confirmed that he was no longer staying with Elizabeth was linked to a string of women before he settled for the Chitungwiza beauty in September 2012.
Some of them include businesswoman Locardia Karimatsenga Tembo, whom he reportedly married customarily in 2011 before ditching her days later.
He also allegedly dated South African Nosipho Regina Shilubane, who proceeded to sue him for wasting her time.
Before settling for Elizabeth, Tsvangirai also impregnated a Bulawayo woman, Loreta Nyathi, with whom he sired a child and reached an out-of-court settlement.
Tsvangirai has reportedly failed to take care of his son Ethan whom he sired with Loreta.
While Tsvangirai has in the past weathered the storm of successive political defeats, embarrassing sex scandals that have soiled his image immensely, it remains to be seen how he will emerge from this latest virility fiasco.