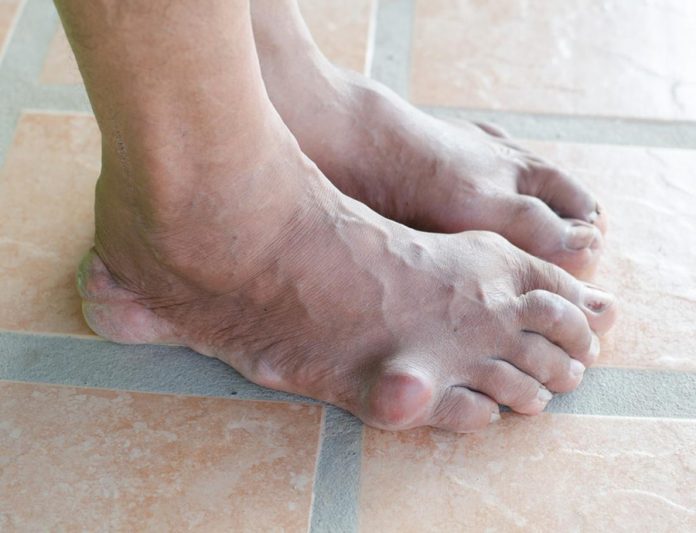 MANY middle-aged and older people suffer from arthritis, a disease that inflames the victims’ joints, causing very severe pain and in some cases, deformity and disability.

The human body’s skeleton comprises bones that are joined together and serviced by cartilage and ligaments, and are serviced by the synovial membrane that secretes a fluid that lubricates the joints.

The commonest diseases that affect our joints are synovitis, sprains, dislocation, arthritis and, of course, gout of which the writer of this article is a very miserable victim.

One of the arthritic family of ailments is osteoarthritis.

It usually develops slowly in the victims latter period of life, as part of the aging process.

Medical doctors think that poor circulation of blood is a possible cause or is one of the causes of that disease adding that injuries, over exertion, hereditary factors and overweight do contribute to that condition.

They add that injuries, over-exertion, hereditary factors and overweight do contribute to the occurrence of osteoarthritis.

The disease causes a degeneration of the bone and a thinning of the cartilage in some parts of the joints.

In some cases, overproduction of bony matter may occur in some joints, and affected joints may not be inflamed although they are extremely painful.

An X-ray picture will easily show what is wrong with the painful joint.

Consulting a doctor without delay is advisable.

Meanwhile, some pain-relieving medicines in addition to the application of dry heat thrice daily may be of some help.

It usually attacks one joint, but may attack more.

The source of the disease may be infected lungs or lymph nodes, and the joints usually attacked are the wrist, the ankle, the knee, the elbow, the spine and the shoulder.

The infection starts in one of the bones and the germs progress to attack the cartilage which, if the disease is not quickly treated, may be permanently damaged.

The symptoms of tuberculous arthritis are the same as those of TB: loss of appetite, a rise in the patient’s body temperature, the patient feels physically weak, and a laboratory blood test will indicate anaemia.

In some cases, abscesses may occur on the patient’s body and pus may be discharged.

Treatment by medical professionals usually results in recovery since it targets the TB germs in particular.

A TB arthritis patient should be put in doctors’ hands without any delay as home remedies are useless.

We now look at gout, a malady suffered by people whose bodies cannot quickly get rid of uric acid, forcing it to accumulate in one or other of the joints where it causes inflammation.

The condition may cause development of kidney stones, or a condition in which hard uric acid crystals occur in some parts of the body, especially the joints; or it may cause acute gouty arthritis, an extremely painful disease.

Doctors say there are also cases of hyperuricemia that may lead to kidneys failing to function efficiently.

The gout in which uric acid crystals are formed in some parts of the body is a chronic ailment.

The crystals are called ‘tophi’, and that kind of gout is known as tophaceous gout.

That disease can destroy some of the patient’s bones if it is not treated immediately.

Just as is the case in all arthritis diseases, it is very important for people suffering from tophaceous gout to see a doctor without delay rather than to try some herbs at home.

Yet another type of arthritis is rheumatoid arthritis, an ailment that occurs generally after one is about 40 years old, but also in some instances a decade or two later than that age.

Its symptoms are a feeling of weakness, a touch of fever and a headache.

Fingers and knees are usually the first to be attacked, followed by elbows, shoulders, ankles and wrists.

There are many cases where all joints of rheumatoid arthritis patients are attacked.

Doctors’ surgeries or hospitals are the best places to go for victims of this malady which, doctors say, is sometimes curable; but cases differ one from another.

Although it is curable in certain cases, doctors say the disease tends to recur, so it is advisable for those suffering from that malady to accept to live with it for the rest of their lives using pain relief.

Rheumatoid arthritis patients who have easy access to hospitals would be well-advised to have particular physicians handling them as that can contribute to much more effective monitoring of their conditions.

If their medicines are procured from private pharmacies, arrangements should be made for supplies to be always available, we mean pain-relieving drugs in particular as arthritis pains are usually, if not always, most excruciating, unbearably severe indeed.

Since uric acid is from what we eat or drink, it is important to identify what is good for potential victims of arthritis.

Every doctor says red meat is not good, which simply means that beef, goats’ meat and mutton are certainly not suitable, but pork, chicken, fish and soya (chunks) are safe.

The writer of this article’s experience is that fried chicken, fried fish and fried pork seem to trigger acute gout, and that over – cooked beef such as that served at most African funerals is quite safe.

Fruits and boiled leaf vegetables as well as 100 percent fruit juice are good for arthritis sufferers.

Excessive weight contributes to the incidence of arthritis, so do fizzy beverages and hot spices.

Many medical professionals believe that arthritis is also hereditary and not just a dietary disease but that diet triggers and worsens it.

They are, however, not able to say why only one person or-so, out of a family of 10-or-12, may be attacked by that malady and not the other members.

It is the opinion of some doctors that many people do actually have excess hyperuricemia, but only a few of them are victims of arthritis.

Because human beings from the same womb and by the same father can react differently to environmental, dietary and medical factors, said a medical professional who preferred not be identified.

He said a member of a family may be allergic to a drug to which his or her siblings are not.

That may be the case with arthritis and most probably some other diseases.

That shows that it is true that one of nature’s mysteries is that siblings can have different physical characteristics and features and very diverse mental dispositions and attributes.