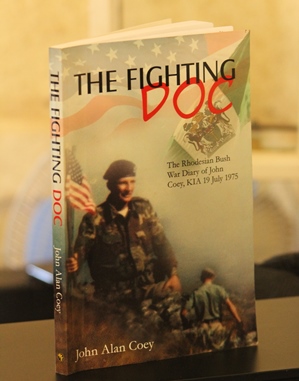 “RHODESIANS are a special people. Over the years we developed a culture of our own that I hope will not be lost – that will be passed down to my children and my children’s children,’ Rhodesian writer Anthony Trethowan wrote in his book Delta Scout.
This was the dream of every Rhodie and they still hold that dream dearly in their hearts.
And no one was going to ruin those dreams and hopes.
They were prepared to defend their ‘paradise’ at all costs.
Rhodesia would live forever.
But alas, they were so wrong.
The indigenes were not going to sit, fold arms and watch whites plunder their inheritance.
In 1980 Rhodesia fell from grace.
It was this dream the late John Alan Coey dedicated his young life to protect.
Born and raised in America, Coey, a trained medic, saw it fit to join the Rhodesian army after receiving military training in the then Salisbury (Harare) in 1972.
To him, this was a noble thing to do, because he thought he was helping protect the legacy of his fellow whites in Rhodesia.
“I am fortunate in taking part in the active defence if this country,” writes Coey.
In his diary titled: The Fighting Doc: The Rhodesian Bush War Diary, Coey chronicles his experiences during the war.
Driven by the determination to ‘protect and serve his newly adopted home’ Coey could not resist joining the army.
“I want to be a soldier, a warrior, a crusader for my God and country and to fight the hell-inspired enemy that would crush every delicate and beautiful creation in this world,” he writes.
“I am willing and eager to do my part in the bush fighting and to guard the borders, but peace won’t come until the war is taken to the enemy, and he learns the fighting superiority of the European, the Western man over the barbarian.”
To him, blacks were wrong to defend their land and resources.
They were being unjust in fighting the whiteman.
Coey seems to miss the real issues surrounding the war he was involved in.
It was the whiteman who was wrong.
The blackman was simply reclaiming what had been stolen from him.
When Coey came from America, he thought the war was going to be ‘a stroll in the park’.
Together with his fellow recruits, he underestimated the determination of the freedom fighters.
The writer recalls a song they used to sing during training with the following words: “When we land in a far distant country,
“There’s a job we will do very well.
“We will blow up old ZAPU and ZANU,
“And all of those commies as well.”
They did not anticipate the rude awakening they got.
The freedom fighters were not going to give it to them easy.
They were prepared to fight to the bitter end.
As expected, Coey portrays Rhodesians as the victims.
Apparently to him, the locals were wrong.
Never mind they had been displaced from their land by the whiteman, driven into restricted areas, forced to live as third class citizens in their own country.
All this did not matter to Coey and his kinsmen.
They were not going to stop till Rhodesia was safe.
“There is nothing to stop Rhodesia from going all out to win its war against terrorism,” writes Coey.
Coey, a ‘devout’ Christian, believed it was his duty to God to safeguard the Rhodesian dream.
“A Christian soldier has much to fight for in this country,” he writes.
It is not surprising that the writer wants to hide behind religion to sanitise the ill-treatment of blacks by whites.
After all, religion was one of the tools used to colonise Africa.
Coey goes on to justify the killing of black civilians during the war.
“All the terror camps are African settlements, which makes it difficult to tell apart terrorists from civilians,” he writes.
No matter how hard he tries, nothing can sanitise the deaths of thousands of sons and daughters killed at Chimoio, Nyadzonia, Tembwe and Freedom Camps, among other bases.
They did not deserve to die.
All they wanted was for the whiteman to let them enjoy their birthright.
Typical of all die-hard Rhodies, as Coey concludes his book, he does not want to admit the sad reality that the attainment of independence by Zimbabwe in 1980 meant the end of Rhodesia.
“Like the French, we can say: We never lost; we were always betrayed,” he writes.
Well, the sooner the Rhodesians realise that Rhodesia is dead and buried, the better.
It might be a bitter pill to swallow, but that is the reality.