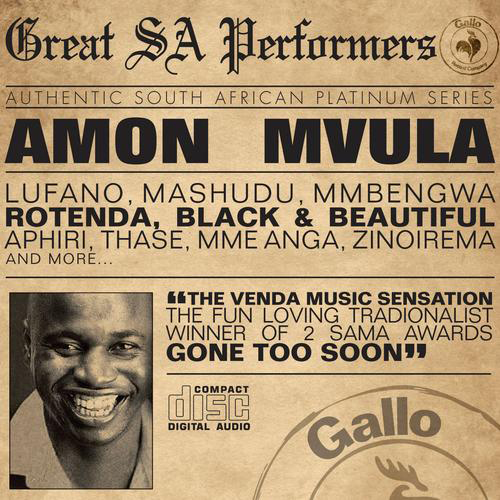 MANY who lived in Harare in the 1980s may remember a performer along the First Street.
The singer, who would perform shirtless, had two main acts; a bicycle wheel spinning act and fire eating, earning the name ‘Dragon Fire’ or ‘Chidyamoto’ (fire eater).
In addition to these skills was a near flawless voice.
The talented performer was the late Amon Mvula, a man well-known for his top notch renditions of local sungura gurus like Nicholas Zakaria, Alick Macheso, System Tazvida and many others.
He honed his skills becoming a force to reckon with locally and abroad.
Who was this man?
Mvula inherited singing and performing skills from his mother, Shelly Mugota, who had a mbira band sponsored by David Whitehead. The band won the Chibuku Neshamwari Dance Festival in 1997.
At that time, it was argued Maggie Gweshe, who later became legendary sungura musician Nicholas Zakaria’s wife, was the only one who surpassed Mvula’s mother on stage antics and voice rendition.
Still in primary school, Mvula together with his brother Gibson and other kids from the neighbouring community started a band that rocked Kadoma. They called their outfit Chimbara Jazz Band.
They used homemade instruments from old cooking oil tins.
Like the popular Jah Prayzah, Mvula wanted to be a soldier and join the Zimbabwe National Army signal band as a dancer.
Mvula featured on Elijah Madzikatire’s musical video ‘Mauto eZimbabwe’ doing drills.
He told anyone who cared to listen that he was a soldier, as he went around in army band uniform.
Such was his love for the army that he applied to be a soldier and was called for an interview only for the interviewers to discover the applicant was a Grade 6 pupil.
Mvula’s parents were shocked to see Amon arriving home in an army truck accompanied by two soldiers who told them to keep a close watch on their son.
Mvula, who was of Malawi descent, grew up in Kadoma. He attended Kuredza Primary and Munyaradzi Secondary School.
His love for music saw him leave school to join a band in Venice Mine, Kadoma.
He became a dancer par excellence, danced as he wheel-spinned at the same time spitting fire.
Mvula took wheel-spinning seriously after he successfully performed for the Zambian Band Orchestra Mangelepa when it toured Kadoma.
He later joined a circus group in Venice, Kadom, that eventually brought him to Harare.
To make extra cash besides his circus gigs he embarked on a solo career, performing along First Street in Harare.
His footworks saw him dance for Zhimozhi Jazz Band, Nyaminyami Sounds, Sungura Boys, John Chibadura, Mugaranhehwe Stars, Hurungwe Sounds, Safirio Madzikatire, Khiama Boys and 2 Brigade Signal Band.
When he was with Zhimozhi, he recorded his songs that included ‘Nyarara Tombi’, ‘Achimwene’ and ‘Rudo’.
Years later, Mvula visited his relatives in Chilazulu Village 5 in Malawi where he became a hit performing his antics.
His uncle Jonathan Phiri saw his talent and supported him. He gave him money to buy instruments. However, on returning to Zimbabwe, he squandered the money.
It is said he cohabited with a coloured woman called Petty in Hatfield.
As the coffers dried, he fell on hard times and was chucked out.
Since his father visited his home area annually, Mvula later begged his father to take him to Malawi again, but his mother would have non of that.
She was not happy that he squandered the cash his uncles in Malawi had given him. This led to arguments over the months as Mvula vowed to leave one day.
One night, a bitter Amon disappeared, skipping the border to South Africa.
For five years, his parents had no idea where he had gone.
When he arrived in South Africa, he worked in various shops as a chanter to attract customers.
During his free time, he performed as a street dancer and eventually joined live bands as a backing vocalist, drummer and dancer.
Mvula made a breakthrough and appeared on posters down south.
Some women from Kadoma who used to sell their wares in South Africa saw the posters and were pleased to inform his parents that he was alive, performing in Venda, in an area called Turmoil.
He was now performing with prominent artists like Thomas Chauke, Peter Teanet and Mahayani Boys.
In 1996 he produced his debut album Makorokoto Volume 1 which made him popular back home as it received massive airplay on local radio stations.
When he retuned home for a visit at number 32B Mutarimanja Street, Kadoma, the fence came down as the whole neighbourhood came to get a glimpse of the man who had become a legend.
Being the loving Mvula, he had brought clothes for everyone in the neighbourhood. Life had changed for the talented son of Kadoma.
He was a new Amon to his family.
In 1997 when Buju Banton came to Zimbabwe, Mvula jointly staged two shows in Harare and Bulawayo with the star.
Those shows earned him so much money that he bought his parents new furniture, changing the outlook of the home for better.
He gave his family and relatives money, helping them get passports and start business as cross borders.
With fame and fortune, the singer also got himself an Indian woman from Louis Tritchardt in South Africa.
He also became a drummer for South African legend Thomas Chauke.
In 2000, Mvula returned home with a white woman called Athlea, a business consultant and film-maker.
He wedded her at Kadoma Magistrates’ Court.
His musical talent was recognised in South Africa where he won the Venda Musical Award in 2004, among others.
Mvula left the world where he had staged shows etched permanently in people’s hearts aged 36.
On June 24 2009 at Harare Hospital, Mvula bade the world good bye after a long illness. He was buried in Kadoma.