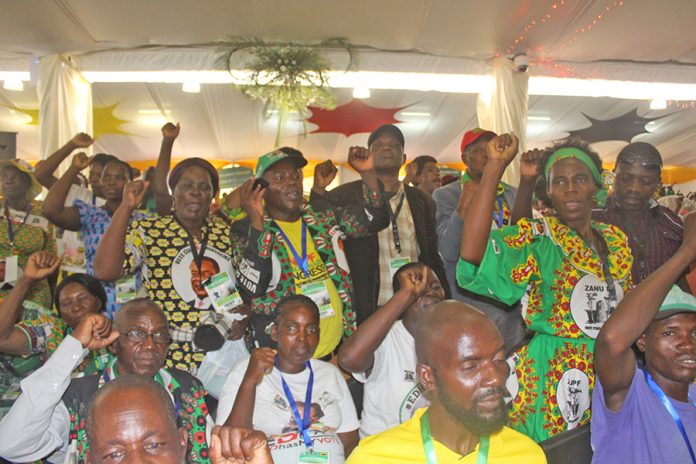 ONE enduring imprint that will forever be embedded on the history of ZANU PF was the Party’s ability to detect and unravel during 18th Annual National People’s Conference in Goromonzi, the many threats confronting the country going into the future.

As the curtain comes down on what has been, as expected, and typical of Zimbabwe, an eventful year, serious threats continue to dog the country.

What is alarming is these threats are emerging from both within and outside the Government.

While it has been a compelling, unavoidable fact from outside the Government, the opposition MDC Alliance would do anything to make the country ungovernable with revelations that there are men and women who are sabotaging should never to be taken lightly.

Time and again we have written in this publication that vices such as corruption, incompetence and a general lethargy in Government are key catalysts in the West’s efforts to effect regime change in Zimbabwe.

January 2019 gave us a glimpse of the extent to which the West and their local allies, including the MDC Alliance and NGOs are willing to go in their quest to take over power.

They are still agitating for the same to happen again.

The opposition party’s organising secretary Amos Chibaya was unequivocal a few weeks ago in Mkoba, Gweru when he gleefully drooled over the prospects of another wave of unrest in the Government.

Chibaya laid bare his party’s plans on unleashing what he said would be ‘spontaneous’ demonstrations against the country.

While we will forgive Chibaya for his rather shocking of the word ‘spontaneous’, we will  however, not take lightly the threats contained therein.

Spontaneous attacks by their very nature do not require ‘organising’, they just happen on their own.

So the fact that the MDC Alliance is ‘planning’ spontaneous as was unwittingly revealed by Chibaya is an indicator of the need for security forces to be on high alert.

“We want to say if we tell one person in a village or street to pass the message, that word will spread fast to everyone in the area,” said Chibaya.

“The message will be announcing the date and time for all the people to converge in major public centres for fresh sustained protests.

“We will no longer just focus on Harare.

“We want to have a situation where while in Harare protests are burning, in Chivi, Gweru and other areas similar demonstrations will be happening at the same time.”

Equally alarming is the continued talk that Government is being sabotaged by people who are supposed to be serving the same.

These must be weeded out at all costs.

We will reproduce what President Mnangagwa and his Vice-Presidents Cdes Constantino Chiwenga and Kembo Mohadi respectively said at the Conference with regards to threats to the country.

“All party members and the nation as a whole must shun retrogressive tendencies such as laziness, indiscipline, greed, corruption, selflessness and immorality, among other vices.

“I further challenge every public servant and party member to reform, reinvigorate and turn over a new leaf towards a result-oriented culture.

“Excuses for non-performance will no longer be tolerated.

“Those who refuse to change and have been busy slowing down Government programmes will be changed.

“Let us shift the population towards a mindset of productivity; we will support projects across every sector of the economy.

“The land must be productive and there is no room for cellphone farmers.

“The rains are pounding, let us all go back and diligently work the fields.”

VP Chiwenga on the MDC Alliance

“These malcontents, after losing both the 2018 harmonised general elections and the Constitutional Court case, continue on a spate of retrogressive violence, intimidation and a propensity for lawlessness, ostensibly to resist the reality of the Second Republic under your (President Mnangagwa) astute leadership.

“This is evident in their persistent threats to demonstrate and carry out unsanctioned and illegal industrial actions.

“We are Zimbabweans and this is our country. We have no other country to go to. We must be united as Zimbabweans.

“There are those like Gangis Khan who thought he would rule the world and made the entire army to perish in the Asian desert and the horses to perish in the desert. Muno hazvibudirire. (It won’t happen here in Zimbabwe).

“You (President Mnangagwa) extended a hand to all political parties that contested the 2018 elections to participate in POLAD.

“We are saddened as a party that your goodwill gesture has not been reciprocated by some.”

VP Mohadi on the economy

“We would like to appreciate the clarity that the keynote of His Excellency gives.

“It is an appropriate guidance to us all. The rejuvenation of the Zimbabwean economy is a priority to us all.

“We, as the ruling party, have to take lead in this race. We cannot delegate it to anyone else. We can only expect to make it in this race if we are led by a visionary and insightful person as in our President.

“We, as the ruling party, continue to hold our destiny in our own hands and the destiny of each one of us is linked to the nation. One can do well only when one’s country and nation is doing well.

“Thank you for reiterating that the global building of a prosperous economy has to be ushered by all of us.

“We thank you for presenting the theme ‘Modernise, Mechanise and Grow the Economy Towards Vision 2030’ with passion and precision.”

When all is said and done, it is imperative that everyone in the country keep their eyes on the ball.