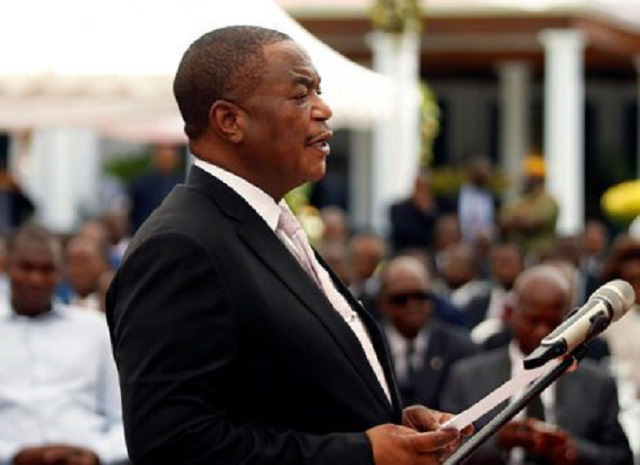 HE arrived for the interview on time, exhibiting a promptness typical of those from a military background.
All smiles, he greeted everyone, with hands signalling the scribes to take their seats.
And the business of the day commenced.
It is business that he holds dear.
He has given his life to serving the motherland, before and after independence.
The affair turned out not to be an interview but more of a discussion punctuated by a lot of laughing.
The Zimbabwe Defence Forces is not partisan but a force committed to ensuring that peace and security prevail in the country, he said.
Speaking to The Patriot on the 38th anniversary of the Zimbabwe Defence Forces Day, Vice-President and Minister of Defence and War Veterans Dr Constatino Chiwenga urged Zimbabwean political leaders and their followers to accept the results of the July 30 harmonised elections and start working on the future.
The elections, won by Zanu PF’s Cde Emmerson Mnangagwa with 50,8 percent of the vote, have been extensively praised as free, fair and credible by local, regional and international observers.
The MDC Alliance, led by Nelson Chamisa, is challenging the outcome of the polls.
“Politicians must accept that an election is a race, hence they must expect to win or lose,” said VP Chiwenga.
“Our army has the relationship of fish and water with the people, dating from the days of the liberation struggle.”
He said the defence forces would not fail to maintain peace in the country when the force has credibly contributed to international peace and security since independence.
Dr Chiwenga said the army has proved its strength and commitment to maintaining local and regional peace since 1980 when it fought the rebel RENAMO forces in Mozambique to protect the country’s economic lifeline of the port of Beira and the Feruka fuel pipeline.
“In 1991, the UN extended its maiden request to Zimbabwe to contribute troops to peacekeeping mission in Angola (UNAVEM),” said VP Chiwenga.
“The request was a welcome development to Zimbabwe in general and the Zimbabwe Defence Forces in particular as it provided a unique opportunity for our forces to rub shoulders with other international defence forces.”
He said the Government of Zimbabwe accepted the request and contributed a contingent of 15 officers to Angola to restore peace and security, ultimately achieving national reconciliation between the warring factions of the National Union for the Total Independence of Angola (UNITA) and The Popular Movement for the Liberation of Angola (Portuguese Movimento Popular de Libertação de Angola) MPLA.
“The contingent was also to help monitor the demobilisation process and free movement of people and goods in that country,” he said.
“In a show of confidence and appreciation of the professional manner in which the ZDF had acquitted itself in the mission, the United Nations twice renewed the Zimbabwe Defence Forces’ mandate in Angola under UNAVEM 2 and 3, (The United Nations Angola Verification Mission) which lasted up to 1997.”
In 1991, Zimbabwe also received another invitation from the UN to contribute troops to the UN Peacekeeping Mission in Somalia (UNOSOM)
The mission was responsible for co-ordinating humanitarian assistance, monitoring the ceasefire, safeguarding as well as distributing relief supplies.
“This mission also gave the ZDF an opportunity to demonstrate their professionalism to the international community,” said Dr Chiwenga.
In 1993, Zimbabwe was asked to contribute troops to the UN Peacekeeping Mission in Rwanda (UNAMIR), where the mission was responsible for monitoring the ceasefire and implementing the Arusha Accords of August 4 1993 meant to end the Rwanda Civil War.
“The ZDF also undertook its mission responsibilities very well, earning itself international recognition,” said Dr Chiwenga.
The Vice-President also said the success of the ZDF in these missions resulted in its invitation to deploy military observers in other UN Peacekeeping missions in countries like Burundi, Sudan, Liberia, Nepal, South Sudan and Ivory Coast, to mention but a few.
“In addition to contributing members to the different peacekeeping missions, the Ministry of Defence and War Veterans Affairs is also promoting peace and security through training co-operation of military officers in the region and beyond.
“This has seen the ZDF enrolling members of foreign, regional and international defence forces in its local military training programmes.
“The ZDF also continues to take training slots offered by friendly countries in their defence establishments,” said VP Chiwenga.
Dr Chiwenga said the ZDF is co-operating with other SADC and AU member states through their contributions to SADC Standby Brigade and the Africa Standby Force respectively.
“In addition, the ZDF continues to attend all the regional and continental security meetings deliberating solutions on security challenges in SADC and AU member-states,” said Dr Chiwenga.
“Zimbabwe has always opened her reputable training establishments such as the Zimbabwe Staff College, the Zimbabwe Military Academy, All Arms Battle School and others to members of other regional defence forces to enhance training. The country has also opened the Zimbabwe National Defence University as the highest institution of military and academic excellence to further such training initiatives.”
Dr Chiwenga said the ZDF will not rest on its laurels but continue to improve, keeping abreast of global trends.