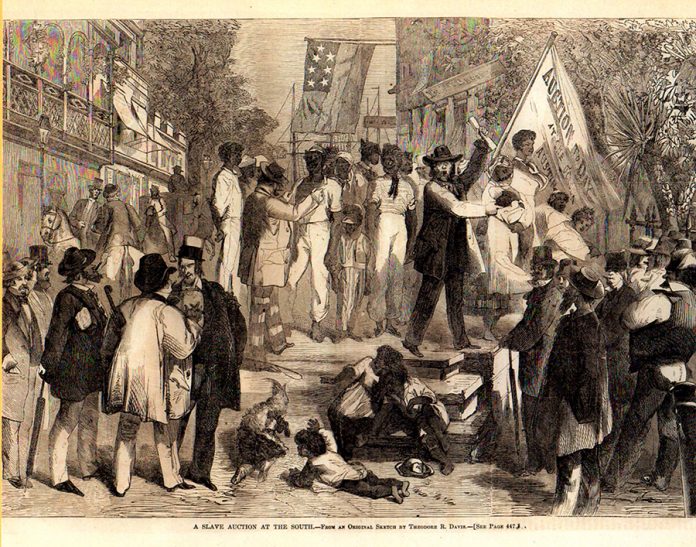 ON March 3 1859, heavy rains pounded the streets of Savannah, Georgia, in the US.

The downpour continued till the next day.

To some, it was as if the heavens had opened its rich treasury and was watering the earth.

But for the 463 men, women and children housed at 10 Broeck Race Course, the thunder and lightning was echoing their wailing and screaming.

The rains were washing away their tears.

Their hopes and dreams were being shattered.

They were at a crossroad.

Their fate was not known.

Not only were their souls being crashed.

Life, as they had known it, was taking a new twist.

There was little they could do and their fate lay not in their hands.

Butler, in spite of having inherited two plantations, owed a great deal of money.

To offset his gambling debt, Butler decided to auction off the human portion of his property.

Over two days, Butler’s slaves were auctioned in what has remained the largest sale of slaves on record in the US.

The auction was referred to as the ‘Weeping Time.’

The ‘Weeping Time’ acquired its name colloquially, for the slaves and their descendants.

To them the rains signified that the heavens were weeping for the inhumanity that was being committed.

The auctioning of slaves did not start or end with the sale of Butler’s slaves, but was a core feature of the Transatlantic Slave Trade.

The ships carried goods such as cloth, guns, ironware and alcohol to West Africa.

On the West African coast, goods were traded for men, women and children who had been captured by slave traders or bought from African chiefs.

Stage two was the brutal middle passage where enslaved Africans were densely packed onto ships that would carry them to the West Indies.

Once in the Americas, slaves were sold, by auction, to the highest bidder.

The auction system was also referred to as the ‘scramble’ as buyers would literally ‘scramble’ to gather as many slaves as they could get hold of.

There were two main types of slave auction: those that sold to the highest bidder and ‘Grab and Go’ auctions.

Slave auctions occurred in the town or market square, or on the streets.

During the height of the trade, demand for cheap labour was huge.

Buyers, without any regard of the feelings of slaves, scrambled to get what they termed the best workforce.

Slaves were stripped off their dignity.

At this point dreams were shattered, families were broken.

Family members would find themselves split up, as bidders, sometimes, would not want to buy whole families but only the strongest, healthiest members.

People newly-transported from Africa would be herded into pens, surrounded by eager buyers, often pushing and shoving to position themselves to grab the finest specimens.

Many enslaved Africans died during the Atlantic Crossing; others became weak and ill.

When they were sold in the Caribbean or in the US, they were made to look as healthy as possible.

The mark-up in price was considerable.

In 1790, John Newton told Parliament that a captive could generally be bought in Africa for £3 and sold at auction in the Caribbean for £25.

Auctions or scrambles were the most popular way to sell slaves.

There they were subjected to inspections using the most intimate and humiliating examinations — as if they were animals at market.

Children were separated from parents without any regard for the emotional ties.

The auction system was designed in such a way that the slave sellers benefitted the most.

No attention was paid to the needs of slaves.

To them, they were less-humans.

They did not matter.

Oliver Ransford, in the book The Slave Trade: The story of Transatlantic Slavery, narrates how the first auction occurred and how slaves carried themselves.

“For some kept their heads low and their faces bathed in tears, looking up to the height of Heaven, fixing their eyes upon it, crying out loudly as if asking help of the Father of Nature; others struck their faces with the palms of their hands, throwing themselves at full length upon the ground; others made their lamentations in the manner of a dirge after the custom of their country.

The African merchants’ concern when the coffles came in was to improve their captives’ appearance before putting them up for sale to the white men; they were fattened with nourishing food, wounds were treated, skin roughened by pellagra and torn by fetters was rubbed with palm oil until it shone, hair was cut short and nails carefully trimmed.”

A captain arriving in a port typically wished to sell the cargo as quickly as possible to realise his profit and, given the possibility of a slave revolt, minimise his personal risk.

Slaves were ‘prepared’ for the auction, given food and rum to make them appear strong and healthy.

Slave sellers had many tricks up their sleeves to present their ‘cargo’ in the best possible light.

Slaves would be washed and their skin covered with grease, or sometimes tar, to make them look more healthy.

Dysentery was disguised by literally plugging the anus of the unfortunate slave with a cork.

Buyers had little if any time to ascertain the true health of their purchase — only later might disease or infirmity become apparent.

“The captives were next subjected to medical examinations by ships’ surgeons which were every bit as ruthless as the selection made in Nazi concentration camps; the doctors always chose those Negroes who bore the marks of small pox to which they would now be immune; the presence of syphilitic scars or any deformity on the other hand called for immediate rejection,” writes Ransford.

“Nor would they accept any slave with a yellow eye, swollen tongue or feverish skin.

The physical examination was conducted on the open shore even to the smallest member and that naked too, both men and women, without the least distinction or modesty and most observers were impressed by its crudity.”

Once the slaves were ready, a starting gun was fired, and the buyers surged into the pen to try and collect the best individuals.

Often, fights broke out among the buyers.

Following the scramble, buyers lined up with their ‘captured’ slaves and paid for them.

After this, slaves would be branded, with a hot iron, the initials of their new owners.

However, the outcome for the slaves was the same.

They were still violated by the process.

They were the biggest losers.

They had no say in what was transpiring.

Slaves had to show up and play the part.

“It was a common practice to force the ‘niggers’ to dance and sing on being brought into the Court House in an attempt to make them appear happy and bright, and one trader confessed that I have often set them to dancing when their cheeks were wet with tears,” writes Ransford.

Slave Auctions were advertised when it was known that a slave ship was due.

Posters would be displayed around the town.

When the slave ship docked, the slaves would be taken off the ship and placed in a pen.

The slaves would be brought from the pen, in turn, to stand on a raised platform so that they could be seen by the buyers.

Before the bidding began, those who wished to could come up onto the platform to inspect the slaves closely.

The slaves had to endure being poked, prodded and forced to open their mouths for the buyers.

The auctioneer would decide a price to start the bidding.

This would be higher for fit, young slaves and lower for older, very young or sickly slaves.

Potential buyers would then bid against each other.

The person who bid the most would then own that slave.

In the West Indies, enslaved Africans would be sold to the highest bidder at slave auctions.

Once they had been bought, enslaved Africans worked for nothing on plantations.

They belonged to the plantation owner, like any other possession, and had no rights at all.

Just like the 463 men and women owned by Butler, slaves could be traded or sold without their consent.

The enslaved Africans were often punished very harshly for not following orders during auctions.

Enslaved Africans resisted against their enslavement in many ways, from revolution to silent, personal resistance.

Some refused to be enslaved and took their own lives.

On the plantations, many enslaved Africans tried to slow down the pace of work by pretending to be ill, causing fires or ‘accidentally’ breaking tools.

Whenever possible, enslaved Africans ran away.

Some escaped to South America, England or North America.

There were also hundreds of slave revolts.

Two thirds of the enslaved Africans, taken to the West Indies, ended up on sugar plantations.