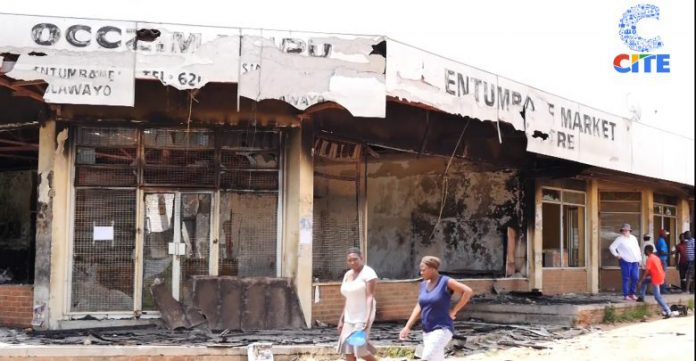 THE West digs through both historical and current affairs to find loopholes to spark conflict among Zimbabweans.

Issues like Gukurahundi, which took place in the 1980s, are time-and-again brought up in a way that demonises the liberation struggle and ruling Party of Zimbabwe.

Instead of the deployment of the 5th Brigade being depicted as a desperate measure taken by Government to find and apprehend dissidents from the national army who had hidden among civilians in Matabeleland, Gukurahundi is portrayed as a retaliation by the Shona for a historical grudge and long-standing tribal war against the Ndebele.

But neither the US nor UK condemn the violent acts of the  protesters that even led to some deaths.

Instead, they condemn the military forces which procedurally  stepped in after the police force were overwhelmed.

They speedily returned peace, order and rule of law to the nation.

Instead of being commended for fixing a situation which had immensely gotten out of hand in a short space of time, the West criticised, and continues to criticise, the Zimbabwean Government for making use of the army in making fruitless a regime change scheme that the West was probably behind.

Some may claim it is a matter of perspective, but one thing that has to be admitted in both above mentioned cases is that the use of the military was not a pre-emptive measure.

It was in reaction to national safety issues that nations like the US would have handled in a worse manner.

In the US, the act of military dissidents hiding among civilians with arms and the violent nature of the mid-January 2019 protests would have both been treated as acts of treason and terrorism.

The US would use all its intelligence, security and military apparatus, to return peace, order and rule of law to the nation.

Nations like Israel have time-and-again made use of the military to end non-violent protests.

Up to several thousands Palestinians have been killed and many more imprisoned; some without trial, for what the settler-government calls terrorism.

Yet the West does not criticise these Western governments for using the military to restore peace.

Of course, people have the right to protest, but if the protest becomes violent, it becomes a threat to public safety and infrastructure.

One can clearly see the role propaganda plays in how the reader interprets events.

Because the West is bent on regime change, they are not concerned with telling the truth of the matter.

On the contrary, they stretch out stories and points they feel could demonise the ruling party and they are not ashamed to omit, lie or exaggerate when it is convenient.

With their well-funded propaganda machines like international news stations, newspapers and internet sites, the interpretation of events by the West greatly shapes the perspective and worldview of Africans.

We watch and read this media multiple times, some on a daily basis and this becomes a process of brainwashing.

Eventually, the audience of the various Western propaganda tools move to the same tune and march to the same drum as the West.

This is largely evident in Venezuela and Zimbabwe where self-hating citizens are influenced by Western media and opposition parties to work against their governments.

Some receive rewards like funding and asylum while the majority are mere victims of deception by the West.

These risk their lives in joining protests that are meant to turn violent in order to evoke the security forces to be deployed.

In this chaos, the West wishes for blood on the floor for the nation to be labelled a failed state which requires intervention from the international community.

Nations like the US, with powers of veto in the UN, will then use this opportunity to broker deals that will place their puppets in power without democratic elections or legislative appointment.

The chaos is clearly good for their objective but the death, arrest, vandalism, pilferage, littering, noise and congestion that our citizens suffer are a great loss.

The Government of Zimbabwe is doing its part in setting up commissions and publishing public reports after such issues take place.

However, the Government is falling short in putting out such information in a media that is modern and readily available to the youth and the Diaspora.

The youths of Zimbabwe and other nations scarcely rely on the traditional forms of media for news and entertainment, namely newspapers, television and radio.

Yet these are the tools Government continues to use to disseminate information to the public.

The youths have voting rights and so they need proper indoctrination to remain nationalistic and patriotic.

To reach them, the Government needs to set up its own propaganda tools.

This will allow people who enquire on such issues online to hear both sides of the story as opposed to that of the west.

Some may argue the Government has no money to undertake such ventures.

However, the work can entirely be done by NGOs with Government support and recognition.

NGOs that are not Western-backed but sympathetic to Government are also important in implying objectivity.

Their take on issues will be echoing the Government’s version of the story and thus suggesting truth on their part.

Another way to go about it is to simply identify the already existent producers of modern media whose works are inclined towards truth and nation building.

The Government could assist in simply offering them a platform to publish their works which will counter Western propaganda on competent levels.

Failure to put across the right message to Zimbabweans in and outside the country will mean the West will continue deceiving our people.

Theirs is a constant de-campaigning against the ruling party and Government which is ultimately meant to swing the vote their way at election time.

In the mean time, the nation suffers immensely from brain drain, a fall in tourist arrivals and other insurmountable losses that are as a result of negative propaganda from the West.

Even more disappointing is realising that there are more whites from the West than blacks from Africa publishing books, films and documentaries on controversial Zimbabwean issues like the Chimurenga, Gukurahundi, DRC war involvement, land reform, new dispensation and the August 2018 election violence.

All these have to be countered by objective material that will serve as a much-needed historical record of what truly transpired.

We ought to define our own history and experiences for the sake of our descendants lest they mistake negative Western propaganda for historical fact.