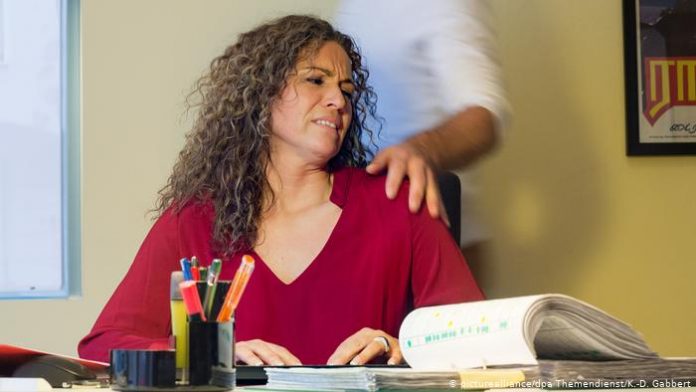 Hands off: Overcoming Sexual Harassment in the Workplace

IN a recent online research, a local organisation, Stop Street Harassment, indicated that 81 percent of women and 43 percent of men had experienced some forms of sexual harassment in Zimbabwe.

Cases of sexual harassment are a common feature with both men and women falling victim in private and public spaces such as homes, schools, churches, workplaces and streets.

In the book Hands off: Overcoming Sexual Harassment in the Workplace, local writer Regina Tendayi explores issues of sexual harassment in places of employment.

According to Tendayi, sexual harassment in the workplace entails an adult making uncomfortable and unwelcome sexual suggestive moves either verbally, in writing or physically towards another adult of either the opposite or same sex, depending on one’s sexual orientation, usually at the place of work.

“The non-reporting or non-action of the victims, who, in most instances, are women, is attributed to the fact that the country is traditionally a patriarchal society and women are often raised to be submissive to men, even in cases where they are abused,” she writes.

“Organisations should enhance the generalised sexual harassment labour and statutory provisions and operationalise them, tailoring definitions to suit their values and cultural prescriptions.”

Tendayi says that, in most cases, victims fail to report as they would be blamed for what would have transpired.

“Sexual harassment in the workplace is real, it is factually rampant,” she writes.

“Most cases go unreported because the victims fear cultural reprisal, marriage break-up, loss of jobs, further victimisation or generally being labelled as the cause of harassment.

Society is not kind, so far as cultural expectations are concerned: it tends to put all the blame on the woman, alleging that the incident could have been provoked by the way she dresses for work, or the way she relates generally with the boss that is perceived as provocative, hence tempting him to make a move.”

With most people employed in the informal sector, where owners assume managing and human resources positions, Tendayi explores how such workers are vulnerable to workplace harassment.

“In Zimbabwe, sexual harassment is predominantly evident in most owner-run organisations where the owner put on two hats, one as the owner and another as the managing director,” she writes.

“Most of the owners take advantage of the fact that they call the shots at these companies, hence abusing their offices.

Under such circumstances, the recruitment process is partially competence-based and the other part ‘physical looks’-based.

The deemed ‘successful’ candidate has to also meet the boss’ physical appearance preferences.”

Men too, Tendayi writes, are victims of workplace sexual harassment, especially in the case involving a female manager or superior.

The writer gives an example of John, a financial accountant with a renowned Chartered Accounting firm whose immediate boss was Linda and had developed feelings for him.

Due to the nature of their work, the two would work overtime so as to meet monthly deadlines.

It was during one of the late nights at work when Linda made sexual advances towards John which he turned down.

Linda threatened John, who was still on probation, saying she would not approve of his employment if he refused and she would in turn report that it was him who made the advances.

“Men (who) get exposed to harassment suffer quietly as they fear that no one would believe their story as well as fear of embarrassment to be perceived ‘less’ of a man and primitive,” writes Tendayi.

“Perpetrators of sexual harassment abuse power regardless of gender: they use tricks that include threatening their subjects with loss of some forms of favour they hold themselves as the only ones with powers to provide.”