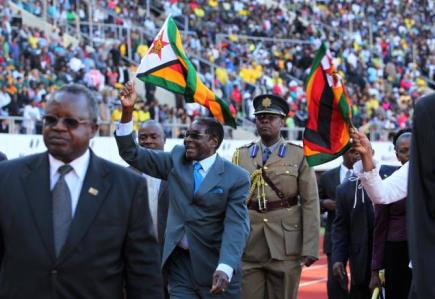 PRESIDENT Robert Mugabe remembers the day he scored a goal.
It was a poor goal, he said.
He used to be a soccer player back in the days at Kutama College.
“I remember scoring a goal, but it was a poor one,” President Mugabe shared the lighter moment during Benjani Mwaruwari’s testimonial match in April 2012 at State House.
“The goalkeeper had left his line and it was an easy goal.”
President Mugabe went on to tell how Amai Grace Mugabe knows where to sit each time he watches football as he kicks the air each time there is a goal scoring opportunity.
He is a staunch supporter of Spanish giants FC Barcelona.
The Head of State follows football avidly.
He watches nearly every Warriors game and at one ZANU PF rally, he lightheartedly mocked the Warriors goalkeeper Maxwell Nyamupangedengu for poor goalkeeping at the COSAFA tournament in Zambia.
Zimbabwe lost to Zambia 0-2.
The launch of the Bob Super Cup four years ago is a befitting celebration for the iconic man who is passionate about the world’s most beautiful game.
He has hosted the Warriors and the Mighty Warriors at State House.
In 2011 he hosted the football queens at a luncheon after they clinched the women’s COSAFA tournament.
Many will remember the President praising Mighty Warriors superstar, Rufaro Machingura, after she scored the goal that sank South Africa leading the team to clinch the COSAFA title.
“Takava neRufaro, muRufaro, naRufaro,” he said.
And this year, the Bob Super Cup is set to be one of the highlights of the 21st February Movement celebrations.
The Bob 90 Super Cup has come of age and is now a permanent event on the football calendar.
The idea mooted four years ago has seen FC Platinum, Dynamos, Hwange, Highlanders and Harare City participating in the annual event.
Dynamos are the record cup holders after winning it on two occasions and will this year have another chance to defend it when they face Highlanders.
Through the leadership of the great statesman, Zimbabweans have been able to participate in the beautiful sport that had bottlenecks in the pre-independence.
The game was a preserve of the few white Africans in the then Rhodesia.
Very few would qualify into the national team at that time because of the racist nature of the Ian Smith Regime.
Dynamos FC, founded in 1963, is one example of a team that was formed because of the discrimination that existed.
Salisbury United and Salisbury City players joined hands to form the club for the black players and the team has grown to be a shining example in Zimbabwe and respected across the African continent.
Cricket, is another game that was a preserve of whites, but that has since been corrected.
As one of the ways to celebrate President Mugabe’s birthday, Dynamos is set to face-off with Highlanders in the Bob 90 Super Cup.
The two featured in last year’s edition of the Super Cup with Dynamos winning the ‘Battle of Zimbabwe’.
This year, the match has every ingredient of a thrilling encounter as a lot is at stake while both teams have changed in their composition.
Both teams have superb stars in their camp.
The President, who turns 90 today (Friday February 21), has stood the test of time.
He has been criticised for the empowerment policies he has implemented since independence in 1980.
However, he has been a pacesetter in African politics.
The Land Reform Programme is being looked at with envy by fellow Africans and beyond.
Happy Birthday Your Excellency.
It might have been a poor goal you scored back in the day, but since then you have been scoring beautiful goals for a Zimbabwe that will forever be remembered.