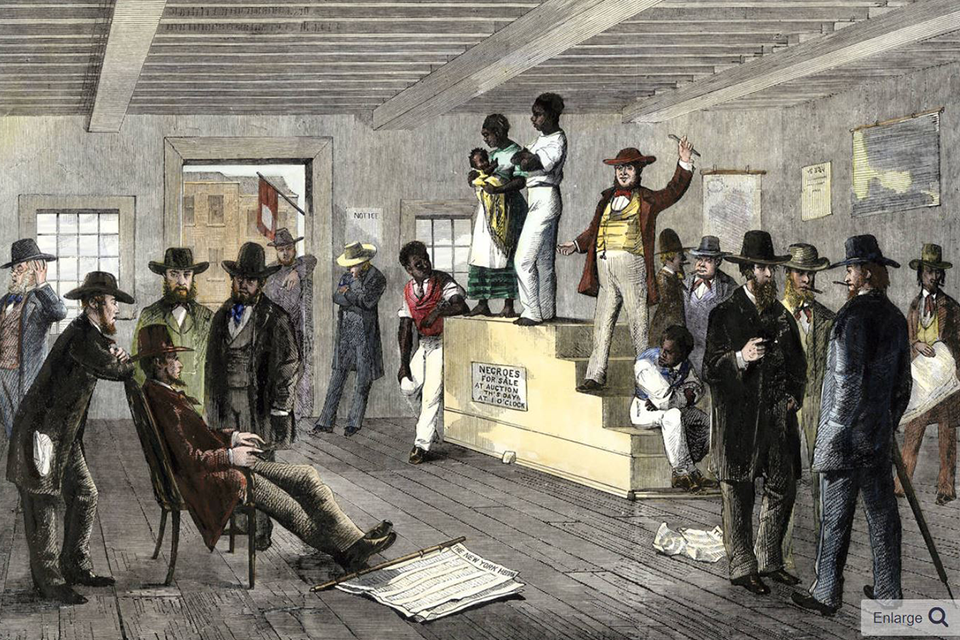 This is just one of the many adverts carried by various companies during that period in which slave trade was in its prime.

There are many others, perhaps not captured, that were published by various companies during those days.

The adverts this publication has seen range from the amounts slave traders were willing to pay for Africans, how useful the Africans were and what they could do.

The first slave trade auction of August 8 1444 in Portugal was perhaps a precursor to several other auctions seeing as it was a profitable venture.

This resulted in a negative turn of events; among them, the kidnapping of men, women and children in order to satisfy the demand.

There was special attention given to the appearance of the Africans so that sales could be profitable.

For what good would it be to have battered and worthless merchandise!

They had to look presentable and not sickly; hence even the torture of these Africans was done in places where the buyers would never look during the pre-auction examinations.

Slave traders journeyed far and wide in order to find Africans to auction and made sacrifices so that returns would be made.

Slave auctions initially occurred in the town or market square, or on the streets of central Lisbon.

The sale of slaves was compared by observers as similar to the sale of horses or livestock.

The laws of commerce regarding slavery address them as merchandise or objects.

There was a time frame set upon purchase for the buyer to decide if he was happy with the slave he had purchased.

Oliver Ransford, in the book The Slave Trade: The story of Transatlantic Slavery, chronicles how the first auction was carried out and the careful preparation of the slaves for such auctions.

Ransford also notes the humiliation Africans were subjected to in order to satisfy the demands of the auctioneer.

Writes Ransford: “…and with slaves too, as Lancarote showed after making a series of raids near arguing in 1444; for as we have seen he carries back to Portugal 235 men, women and children a mixed harvest of negroes and moors from the borders of Guinea.

These he decided to sell by public auction.

He landed them at Lagos in the Algarve on August 8 1444 and they were immediately herded into a field which can still be seen outside the town’s gate.

Standing there today it is easy to imagine the bewilderment of the prisoners as they saw themselves surrounded by a crowd of jubilant whitemen, women and children.”

The description of the men and women is demeaning and they even describe the Africans as ugly.

The humiliation felt by the Africans could easily be noticed as some of them kept their heads low while others were in tears.

However, all these expressions are not considered by the auctioneer who must make a profit from the sale.

To ensure this was achieved, the Africans had to be groomed and this meant putting them on a feeding scheme that made them appear worth the money spent on them. Ransford further observes that:

“The African merchants’ concern when the coffles came in was to improve their captives’ appearance before putting them up for sale to the white men; they were fattened with nourishing food, wounds were treated, skin roughened by pellagra and torn by fetters was rubbed with palm oil until it shone, hair was cut short and nails carefully trimmed.

The captives were next subjected to medical examinations by ships’ surgeons which were every bit as ruthless as the selection made in Nazi concentration camps; the doctors always chose those Negroes who bore the marks of small pox to which they would now be immune; the presence of syphilitic scars or any deformity on the other hand called for immediate rejection.

Nor would they accept any slave with a yellow eye, swollen tongue or feverish skin.”

In these inspections, there is no regard for the Africans’ culture which forbids nudity. The nakedness of an elderly person is a taboo in African culture, but the examinations were done in the open where men, women and children who may otherwise be relatives could see and lose respect for each other.

“The physical examination was conducted on the open shore even to the smallest member and that naked too, both men and women, without the least distinction or modesty and most observers were impressed by its crudity,” writes Ransford.

The Slavery and Remembrance website notes that the scramble was perhaps what could have tormented the Africans since it was no longer an issue of ethics but a commercial system with Africans sold on auction blocks to the highest bidder.

The websites note that: “It is difficult to imagine that a system that once treated human beings as commodities — with price tags — was not only legal, but was considered to be ethical and a major source of wealth, influence, and respectability for many.

By the early 17th Century, however, the Transatlantic Slave Trade was a sophisticated commercial system that hinged on the availability of captives transported to the coast by African traders deep in the interior of the continent.”

More money was paid for men than women with men fetching about £12 while £10 was for fit women who were no longer breasted.

Slave traders sold enslaved people in a variety of ways.

Some traders delivered Africans directly to merchants who had placed orders with the shippers.

Other Africans were sold on auction blocks to the highest bidders in major Brazilian ports like Port-au-Prince, Bridgetown or Salvador de Bahia.

For many Africans, the terrifying ordeal was the ‘scramble’, where purchasers raced among the assembled captives, grabbing and claiming the ones they wanted.

The website Understanding Slavery Initiative also observes that auctions were now more popular and did not regard any emotional ties: “In 1790, John Newton told Parliament that a captive could generally be bought in Africa for £3 and sold at auction in the Caribbean for £25.

Auctions or scrambles were the most popular way to sell slaves.

There they were subjected to inspections using the most intimate and humiliating examinations, as if they were animals at market.

Children were separated from parents without any regard for the emotional ties between them as documented in accounts by Mary Prince and Frederick Douglass.”

Other sites, among them Eye Witness to History and Slaves for Hire: Renting Enslaved Labourers in Antebellum Virginia highlight how, when the number of slaves exceeded the required number of targeted labourers, slaves were sold at auction.

They add that: “Slaves remained locked up awaiting the sale and before the sale, potential buyers were given a chance to inspect them pulling their mouths to see their teeth, pinching the limbs to check how muscular they were even walking them up and down to detect if they were lame.”

In Narrative of Henry Watson, a fugitive slave, Henry, points out that he would order them to be stripped and tied hand and foot together.

He would have his paddle.

This instrument he would apply until the slave was exhausted on parts which the purchaser was not likely to examine.

In 1859, an enormous slave auction took place at the race course in Savannah Georgia.

It is said the magnitude of the sale was the result of the break-up of an old family estate that included two plantations.

About 450 Africans, including men, women and children, were auctioned, with buyers coming from the North and South Carolina, Virginia, Georgia, Alabama and Louisiana.

While there were rules for the auction, there was sometimes no guarantee that slaves would be sold in family units as in that particular sale.

Sales in Virginia exceeded those of all other upper South State.

The rise of cotton production in the lower South and the end of the Transatlantic slave trade in 1808 also created markets for Virginia slave holders to sell the enslaved Africans to meet the increasing demand for labour.

Other adverts that we have come across include the following:

“To be sold on Wednesday the 14th 252 choice healthy negroes just arrived on the ship.”

“Cash! All persons that have slaves to dispose of will do well by giving me a call as I will give them the highest price for men, women and children” and

“A prime gang of 25 Negroes accustomed to the sea island of cotton and rice.”

It is written that H.M. Cobb travelled to Virginia to purchase slaves and brought them back to Georgia where he auctioned them.

Alabama slave traders travelled to Prince Edward County and arranged with slave holders to transport the Negroes south for sale.

They arranged for clothing, coffins for any who died along the journey and the transporting expenses.

In return, they received two-thirds of the slave sale proceeds.

This slave-selling market resulted in the kidnapping of enslaved people as well as free people and this was called ‘black birding’.

Peter Wych, a teenager, was pulled from a wagon he was driving and sold in Georgia.

The Alexandria Gazette and Daily Advertiser of August 8 1818 reported that an eight-year-old boy was kidnapped in Lexington and hustled away in a row boat.

In Winchester, in the 1820s, slave traders roamed around the streets with hats written ‘Cash for Negroes’ and carried out their transactions at Bryarly’s Tavern ad McGuire’s Hotel.

Betts and Gregory, an auction house located on Franklin Street in Richmond, advertised prices for African-Americans in March 1861 and prices ranged from US$1 300 to US$1 600.

Other companies such as the D.M. Pullin and Company and the Dickinson Hill and Company also announced the sales.

Like goods, human beings were auctioned off with the highest bidders securing the best of the day.

With no rights, Africans lived their worst lives as slaves.