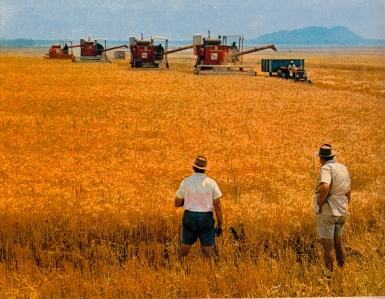 RECENTLY, during a trip to Pretoria, this writer met an old white Zimbabwean farmer who relocated to South Africa after independence.
The former farmer said that during Rhodesia, the European farmers were the best farmers not only in Rhodesia, but across the whole of Africa.
They could only be compared to Kenyan white settlers.
He went on to lament the loss of land and how the Africans were never good farmers back in colonial Rhodesia.
The sentiment from the white farmer reflected the times during the colonial period when the black farmers were often regarded as lazy and unproductive.
In those days, the white farmer was seen as a hardworking and most productive farmer.
What is often forgotten is that the farmers were able to stay on the land and keep farming because the colonial government provided them with numerous subsidies. In order to understand the role of subsidies to white farmers and our present food insecurity, we must return to the past.
Our history of food insecurity goes back to the time when Cecil John Rhodes’s British South Africa Company (BSACo) seized land and cattle in 1890, forcing people off the land and shooting them.
By 1923, the colonialists had taken control of one sixth of the land in Rhodesia. This land was prime fertile land where rainfall was abundant.
The company demarcated African land, relegating Africans into reserves or Tribal Trust Lands which were less fertile.
In the north the land was infested with tsetse flies and in most areas people became overcrowded living on poor unproductive soil.
The BSACo then took African cattle forcing Africans to work on the farms that had been pegged out by settlers, demanding tax in cash for hut tax, cattle, dog and even bicycle tax thus forcing the people to work under a slave like system called chibharo.
The white population comprised three percent of the population and yet they gradually controlled 75 percent of the economically viable land.
Meanwhile the 97 percent black Africans controlled only 23 percent of poor overcrowded and drought-prone land.
The segregation based on race was supported through the introduction and implementation of various land acts.
The Land Apportionment Act (LAA) of 1930 was a landmark for the racial division of all land in Rhodesia.
This act divided the country into reserves, meaning land exclusively for occupation by Africans.
Native Purchase Areas was an area where African farmers had limited ownership of farms.
In addition to all the support given to white farmers, there were legislations to benefit the settler farmer during the Great Depression of the 1930s.
These acts included the Maize Control Acts of 1931 and 1934 and the Cattle Levy Acts of 1931 and 1934.
Then there was the Native Land Husbandry Act of 1951, which aimed “to provide for the control of the utilisation and allocation of land occupied by natives and to ensure its efficient use for agricultural producers and to require the natives to perform labour for conserving natural resources”.
According to R.H. Palmer, in Land and Racial Domination in Rhodesia, London, and H.V. Moyana in The Political Economy of Land in Zimbabwe, these steps were introduced in order to reduce competitiveness of African agriculture and were “implemented through subsidies and encouragement given to settler farmers, e.g. through capturing the African grain market; discrimination against the marketing of African produce and in the allocation of funds to African farmers.
“All these measures effectively removed the potential competition of African farmers.”
And yet, despite the hardships pre and post-independence, Africans worked hard and there was plenty of food.
Most of the food eaten in this country was grown in the rural areas.
On the white owned farms, they grew maize for cattle, as they had always done. White farmers exported massive quantities of tobacco because Zimbabwe has one of the best climates and soils for growing tobacco in the whole world.
The government Agricultural Rural Development Authority farms (ARDA) produced surplus food.
The Grain Marketing Board (GMB) silos were full of maize, from Mutoko to Karoi and right across the country.
If we then roll the clock forward past Economic Structural Adjustment Programmes (ESAPs) to the Land Reform Programme, to sanctions, to the high inflation and to 2008, we find that Zimbabwe moved from being a country of food self sufficiency to a country regarded by Westerners with a mixture of pity and dislike.
Part of Western pity included massive aid to Zimbabwe.
Aid and food handouts have given an impression of food dependency as if Africans in rural areas have always waited for the donor to give them food.
And yet, the reality is that development assistance through food handouts has been nothing, but a band aid.
It forced people to become dependent on Western donors.
There are many questions to be asked about these aid workers living in Zimbabwe and elsewhere.
Aid causes food dependency.
At the same time, it ignores the history and hard work of the people.
This is what the Wall Street journal says about the aid, “It is an insidious culture that has left Africa more debt-laden, more inflation-prone, more vulnerable to the vagaries of the currency markets and more unattractive to higher-quality investment.”
As the rain season commences and our people struggle to find seeds and fertilisers, we should return to history and recall the time when our land was gradually taken away from us.
At the same time, we should tell the history of farm subsidies that enabled the Rhodesian white farmer to produce more food while using cheap African labour on the land.
Today, within Zimbabwe, despite the struggles of sourcing inputs, the farmer on the resettlement area does not rely on food handouts.
He has proved that he is fully able to utilise most of the land even without the subsidies that used to benefit the European farmer at the expense of the black owners of the land.
The politics of food in Zimbabwe should be understood within the historical context of land dispossession.