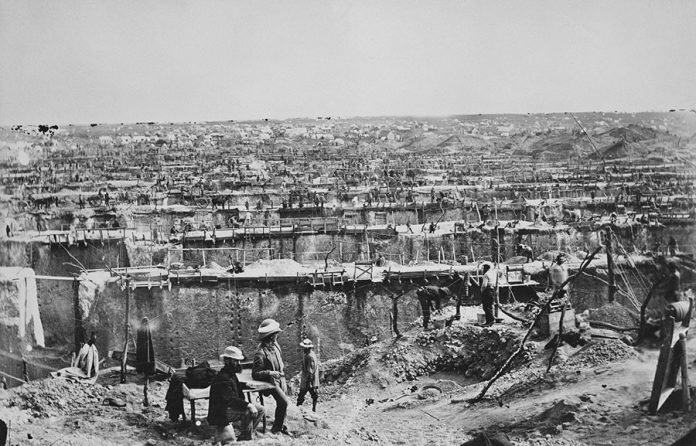 ALL throughout the African continent, European nations made treaties and resorted to military force in order to weave a tapestry of European domination over the continent.

African resistance was often fierce and at times, African armies would defeat Europeans armies, such as at the Battle of Isandlwana in SA in 1879.

In 1910, less than a decade after the British victory in the Anglo-Boer War (1899-1902), Britain unified Cape Colony, Natal and the former Afrikaner Republics of the Transvaal and the Orange Free State in the Union of South Africa – now independent South Africa since 1995

The British administration and the subsequent Afrikaner leaders of the Union of South Africa were mainly concerned with monopolising the profits from the country’s rich diamond and gold mines.

As a result, they continuously passed legislation that excluded black Africans from the economic benefits of the mining industry.

Indigenous African mineworkers were also forced to live in compounds that were fenced and guarded until their work contracts expired.

Once in control of the union Government, Afrikaners began passing legislation to give even greater preferential treatment to whites.

Thus, beginning in 1911, the all-white South African Government systematically passed more than 300 laws to guarantee the separation and inferior social, political and economic status of indigenous and other non-white peoples in SA.

The laws made it difficult, if not impossible, for the indigenous people to move freely about their own country, to secure jobs, to vote and to mingle with the white settlers.

One of the early laws that established a foundation for racial segregation, later known as apartheid legislation, was the Natives Land Act of 1913.

This racist law designated less than seven percent of the land in the Union of SA for indigenous people, even though they made up more than two-thirds of the population.

The remaining land was reserved for the settler whites, who made up only one-fifth of the population.

Apartheid in SA was largely based on the philosophy of white supremacy, also called ‘Baasskap’.

Many legislative acts that paved the way for a racially segregate SA were mostly driven by economic considerations.

Later, a leading proponent of apartheid was to be Dr Hendrik Verwoerd (1901-1966), who is frequently cited as the architect of the racist system.

In the mid-1850s, a teenaged Xhosa prophetess named Nongqawuse (c. 1840-1900), preached that if the Xhosa of the Eastern Cape Colony would destroy their grain and kill their cattle, then their dead chiefs and heroes would rise from the dead and liberate the Xhosa people from British colonial oppression.

She promised that the Xhosa would be rewarded with new, strong cattle and abundant food and that the European settlers would be driven into the sea.

The ill-fated ‘Golden Age’ or Millenarian Movement among the Xhosa of the Eastern Cape, during 1856-1857, led to their final military and political demise as well as their dislocation.

During this time, many of the Xhosa’s cattle had contracted lung sickness (bovine pleuropneumonia), a fatal disease that quickly spread to Xhosa herds after white settlers brought infected ‘exotic’ European cattle into the country in 1853.

According to Dr Tony Monda, in his series titled ‘Cattle — A custodial heritage of Zimbabwe’, this catastrophic disaster also befell indigenous people of Zimbabwe when Cecil John Rhodes and his settler-pioneers imported infected cattle from the West, into Rhodesia.

All told, it was estimated that a minimum of 400 000 cattle were slaughtered by the Xhosa; either in conformity with Nongqawuse’s prophecy or because they had become infected with lung sickness.

Another 150 000 were forced to leave Xhosaland in search of food and employment on European-owned farms or in the cities and towns of the colony.

The Xhosa had fiercely resisted European military and cultural encroachment on their lands during the first half of the 19th Century, but the devastation wrought by the cattle-killing movement dramatically weakened Xhosa unity and military strength.

The Governor of the Cape Colony at the time, George Grey (1812-1898), exploited the calamitous events following the Xhosa cattle killing to strip the powerful Xhosa chiefs of their political authority, military power and economic independence.

Ethnic tests during the apartheid era, to establish one’s ethnicity, were a basic part of life for the Cape coloured people and other individuals.

Although officials often spoke of the objective or even scientific basis of their system, things were rarely that.

In fact, one of the apartheid government’s more notorious ‘tests’ for racial classification involved placing a pencil in a person’s hair.

If the hair sprang back when the pencil was twirled, the individual was regarded as Cape coloured.

If it did not spring back, the person was classified as ‘white’.

Using standards such as these, the Government created eight different categories of ‘coloured’ people in South Africa: Cape coloured, Malay, Griqua, Chinese, Indian, ‘Other Indian’, ‘Other Asiatic’ and ‘Other coloured’ classifications of people.

However, according to the Union of SA Government’s racial classifications system, people of Japanese origin were considered as ‘honorary whites’.

Dr Michelina Andreucci is a Zimbabwean-Italian researcher, industrial design consultant, lecturer and specialist hospitality interior decorator. She is a published author in her field. For views and comments, email:linamanucci@gmail.com.