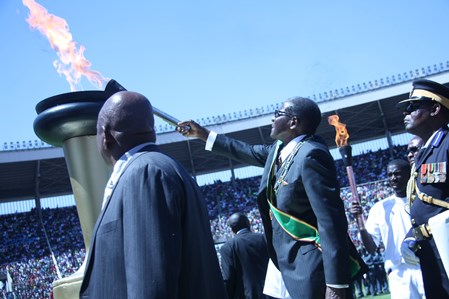 IN a dimly lit hall in one of Bulawayo’s western suburbs, two black lawyers flanked by a white lady speak in hushed tones to a selected audience of elderly people and students from a local university.
They are asked to help the lawyers as witnesses to build a case against the Government in the Gukurahundi disturbances.
These elderly people are supposed to identify graves, surviving members of those killed in the disturbances and any other information that could be used to incriminate the state.
What interested me was not the agenda of the meeting, it was the white woman who sat confidently among the blacks, the same woman whose forefathers or father killed many blacks during the Rhodesian war, the same woman who called us kaffirs, now sitting patiently trying to help the cause of those who claim to have been disturbed by fellow black people.
All the people who attended that meeting were paid, upon producing invitation letters.
Ironically the same lawyers and non governmental organisations would never tell the truth of what exactly transpired during the Gukurahundi era, because they are part of a conspiracy that seeks to destabilise the nation.
The Patriot issue number 195 has an interesting review of the Invisible hand behind Gukurahundi by Melinda Teya where she demystifies and unpacks Breaking the Silence, Building True Peace: a report on the disturbances in Matabeleland and the Midlands from 1980 to 1981.
But history will always prove who the real murderers are.
Decades after the end of colonialism, mass graves and further evidence of the atrocities perpetrated by Europe in Southern Africa continue to be discovered, raising questions to why the region has not made an attempt under international law to claim compensation for the brutalities.
To date only the Herero of Namibia have followed the example of the Mau Mau in Kenya to take Europe to task over genocide and other crimes against humanity in much the same way that the Jews — up to today — are being compensated for what Nazi Germany did to them.
In Zimbabwe the country will on April 18 commemorate Independence Day, another annual reflection on the tens of thousands of lives lost in colonial massacres. The celebrations come a few months after the discovery of a mass grave at Chibondo Mine in Mount Darwin District. In those mine shafts have been discovered the remains of some 10 000 people killed by the British and American backed Rhodesians between 1972 and 1979.
At Chibondo, which aptly means “little bone”, harrowing tales have been told about the way Rhodesian forces conducted the genocide.
The Rhodesians would round up entire villages and homesteads and shoot them at point blank range.
Some did not die in the shootings but all were dumped in the mine shafts and grenades, teargas and chemical arms were tossed in after them.
The Rhodesians would then seal the shaft entrances with grenades, which would then go off resulting in cave-ins to ensure no one left Chibondo alive.
Blacks who were used to cart the bodies of the dead and half dead to the shafts were also shoved into the shafts before the grenades sealed them off.
Miners in search of gold stumbled across the remains and subsequent exhumation by the Fallen Heroes Trust of Zimbabwe unearthed a sight too gory for words.
Villagers in areas around Chimoio and Nyadzonia in Mozambique are also discovering remains of liberation war heroes and heroines in graves dotted across an area that witnessed a lot of atrocities by Portugal, Rhodesia and apartheid’s killers.
The Chimoio attack on the dawn of November 23 1977 resulted in the deaths of at least 1 200 people again mostly women and children — and their bodies were subsequently buried in mass graves and at various sites, either individually or in groups, across the district.
It is these bodies that villagers are coming across as they go about their daily agricultural activities; similar discoveries are being made in Zambia and Tanzania.
However, apart from the sheer scale of genocide that has been made apparent by such revelations over the past years, the most shocking thing about these discoveries has been the response from some sections of our society and communities that were affected by the colonial era murders, rapes and torture: denial.
While it is understandable that the perpetrators of these crimes against humanity would like all evidence swept under the carpet, such a reaction among the victims is quite astounding.
The Western sponsored Movement for Democratic Change led by Morgan Tsvangirai at one time claimed that the bodies pulled out of Chibondo Mine shafts bodies were victims of political violence from Matabeleland.
This has been latched onto by former Rhodesian functionaries and activists — who now wear the respectable garb of Zimbabwean lawyers, human rights activist and historians-who have made the most of such statements to obfuscate the real issue- that crimes of humanity were committed in the land between the Zambezi and Limpopo rivers.
It is the same lawyers under the banners of human rights that are being pushed to pursue internal country political matters like the Matabeleland disturbances. Huge amounts of money have been poured to take the government to court over Gukurahundi disturbances by the same people who massacred our own at Chibondo, Chimoio and Nyadzonia.
In the entire war for freedom between 1966 and 1979, about 50 000 people are said to -have lost their lives.
There are mass graves scattered all around the operational areas to confirm the deaths.
If 20 000 people were killed during the disturbances in Matabeleland as the report claims, it has taken too long for someone to stumble upon a single mass grave. Because there is no way such a huge number of people could be killed without some of them being thrown in mass graves.
Whilst no one denies the figure, where are the mass graves to confirm the staggering figure of 20 000?