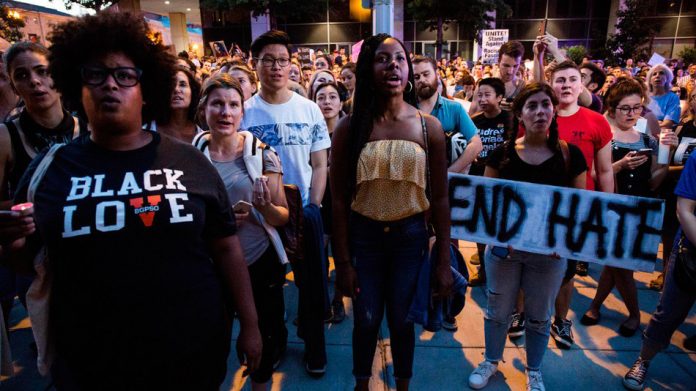 THE US has, in the media, everywhere, described itself as the ‘free world, the home of democracy, land of opportunity and its president as the leader of the free world’.
Meanwhile, President Robert Mugabe, who has known no rest, working so that his people can be self-sustaining in all spheres of life is touted as a ‘villain’, a ‘dictator’.
But recent events in both Zimbabwe and the US have shown who the real statesman is.
Both countries have had their issues to deal with, but most telling is the response of the leaders in these two nations to challenges bedevilling their lands.
While US President Donald Trump has refused to castigate the evil act by white supremacists who, in the mayhem, killed a woman in Charlottesvile and injured many others, President Mugabe continues calling for and promoting unity among his people.
“The stubborn denial of President Trump to denounce neo-Nazis and racists and his flattery of organisations that promote these frightening and unacceptable worldviews … raise serious questions regarding the motivation and the moral consciousness of he who is supposed to be the leader of the free world and the protector of democracy,” Israeli politician Tamar Zandberg said.
According to writer Dambudzo Mapuranga: “The saddest thing about Charlottesville is that the gains of the civil rights movement are being eroded.”
And as Zimbabwe celebrated its 37th anniversary of Heroes’ Day, the country’s leadership has ensured that the gains of independence must not, and will not, be eroded.
The message that has come through in the ‘Youth Interface rallies’ in which President Mugabe is meeting the youths to have more insight on their needs and aspirations is loud and clear.
This message, re-iterated during the Heroes’ and Defence Forces’ days, is that, no matter what the challenges we face, we must remain united as a people.
In Gwanda, during the recently held ZANU PF Youth Interface Rally, President Mugabe called on citizens to safeguard the land which was repossessed after a bitter liberation war.
Addressing the youths in Matabeleland South, the President made it clear that every Zimbabwean has a place and opportunity in the country.
“Heroes’ Day leads us to take to heart what those who fought for the struggle and died for it left behind.
“It is a day for stock-taking and reflecting.
“Are we still united as we were in the liberation struggle?
“I dare say we cannot leave this world better than we found it if we continue to exhibit nauseating factionalism, tribalism, regionalism, corruption and unpardonable hatred of each other.
“Unless we strive for unity, there can never be peace and development in this great land.
“Unless we stop gossips, lying and backbiting each other, we are doomed.
“Let us therefore not betray the revolution and forget that the freedom we enjoy today came through the supreme sacrifices of brave sons and daughters of this land.”
The lambasting of bigotry by Trump, a result not of his moral convictions but pressure from the world, gives African-Americans no peace at all.
Trump’s America is for whites, it has no room for the ‘dark’ part of the US society.
The message of unity that begun even before Zimbabwe’s independence has resonated throughout the years and has anchored the country’s development.
Speaking during the 37th anniversary of Heroes’ Day, President Mugabe said: “Tinoda kuti tirambe takabatana pane zvatinoti objectives, atinoti maprinciples, zvinangwa zvakakosha zvekuti nyika yedu ibudirire.”
Americans must be wishing for Trump to take to heart President Mugabe’s messages to his people.
“Tinoti tinoda tose kuti tive vana vevhu tirime ivhu iri tiri tose tikohwe tiri tose tigodya zvatinokohwa izvozvo tiri tose,” said President Mugabe.
The ugly white nationalism, encouraged by Trump, epitomised by the racist violence in Charlottesville and the US president’s reluctance to condemn it has a whole section, the black one, paralysed with fear, worried and stressed.
“These people, the black-Americans, are descendants of slaves and to begin to relive the horrors experienced by their ancestors in these modern times is horrific,” said social commentator Goden Nyambuya.
“It is truly shocking that in the land of the so-called free, such things are happening.
“President Mugabe has worked towards protecting and promoting the rights of his people; he has not forgotten why he and fellow comrades went to war, while Trump has not hesitated to trample all that was fought for by US’s civil rights activists.”