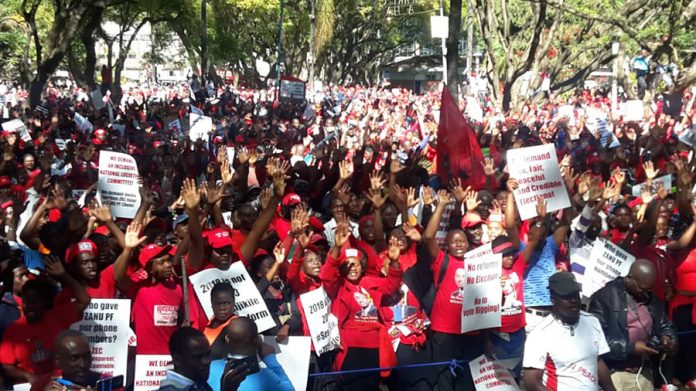 DEAR readers!
Here are a number of questions from the just-ended harmonised elections.
Why did MDC Alliance leader Nelson Chamisa declare himself the winner before the election results had been announced by the Zimbabwe Electoral Commission (ZEC)?
Why did Chamisa continuously tell Zimbabweans that he was never going to accept any result coming out of the general elections which did not declare him the winner?
Is it true that Harare is Zimbabwe and that Zimbabwe is nothing without Harare?
Lastly, who is desperately trying day and night to destabilise Zimbabwe?
In this article, we are going to try and answer the above questions.
To start with, Chamisa has no history of winning.
The history we have is that in a big election in the MDC-T, he was beaten by Douglas Mwonzora for the post of secretary-general of their party.
The late Morgan Tsvangirai, who was his ‘godfather’, realising that the boy was a perpetual loser, shielded him from further elections and simply appointed him vice-president of his party.
Therefore, Chamisa was coming from nowhere when he told Zimbabweans that he was going to win big in the just-ended election.
The constant announcements by Chamisa that he was going to win were meant to prepare Zimbabweans to accept the result.
It was a big psychological war waged on the people of Zimbabwe.
The threats he made of not accepting any result where he, Chamisa, was not declared winner was meant to cow the people to accept the result without trouble.
Now coming to the question: “Is Harare Zimbabwe or Zimbabwe, Harare?”
Chamisa, speaking at one of his rallies before the just-ended elections, threatened that he was going to shut down Harare if he was not declared the winner.
The threat was meant to say Harare is the economic messiah of Zimbabwe and so, if it were to be shut down and die from an economic point of view, the rest of the country would die with it.
The truth is, however, the very opposite of the above assertion.
If Harare is shut down, the rest of the country is not going to die.
However, if the rest of the country is shut down and allowed to die, Harare will be history – dead.
The pre-occupation with Harare, which is the specialty of the MDC Alliance and Chamisa, only goes to show how ignorant some people are when it comes to the economy of the country.
Lest we are accused of mere politicking, let us zero in on some economic facts here and we are going to look at the forex situation, particularly the US dollars which are very vital to the continued ticking of our economy.
Today, most manufacturing industries in Harare are down.
Therefore, not so many manufactured goods are coming out of Harare for exports.
This means not many US dollars are generated by exports coming from Harare.
Now, where are we getting our US dollars from?
They are coming from outside Harare, especially rural areas.
It is the exports from the platinum of Ngezi communal lands, Shurugwi and Zvishavane communal lands that is bringing in the US dollars.
Furthermore, it is the exports of chrome from the Great Dyke of Kwekwe, Mutorashanga, Shurugwi and Lalapanzi which are bringing in the US dollars.
It is also the export of tobacco from Shamva, Rusape, Karoi and other parts of the country which is racking in the US dollars.
This year alone, over US$700 million dollars were raised from tobacco.
We should not forget the large amounts of gold and diamond which is exported from the rural areas which are also bringing in the US dollars.
Already, over 20 tonnes of gold have been exported, bringing in millions of US dollars into the country.
The makorokoza (artisnal miners) are bringing in more foreign currency into the country than the whole of Harare.
We do not need to go into the question of food to show that Harare is nothing when compared to other areas, especially rural areas.
Therefore the story of foreign currency alone shows you that those who say Harare is Zimbabwe must have their heads examined.
These are the same people who are bent on destabilising the country at the instigation of their foreign masters.
The threats by such people and their leader Chamisa to make Zimbabwe ‘ungovernable’ must not be taken for granted.