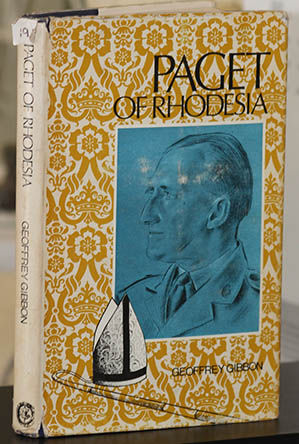 Paget of Rhodesia (A memoir of Edward, 5th Bishop of Mashonaland)
By Geoffrey Gibbon
Published by Books of Rhodesia (1973)

CHRISTIANITY, albeit being a ‘noble’ religion, was manipulated when it was introduced to Africa.
Forget that the Africans had their own religion, which was denounced and dubbed evil and people were coerced into taking up the whiteman’s religion.
“Blessed are the poor for theirs is the kingdom of heaven’ was the message pounded into the African under the ‘new’ and ‘good’ religion.
The aim was to manipulate, create a docile and submissive African who did not question the ills of the whiteman.
Filled with the ‘gospel’, the African was conditioned not to question colonisation.
Christianity was a key driver in colonisation.
At a time when the whiteman was preaching the gospel to Africans, he also took the opportunity to plunder the continent’s resources.
Just as King Leopold II of Belgium wrote in a letter to colonial missionaries in 1883, the underlying reason for ‘evangelising Africa’ was not to save souls, but to ‘inspire, above all, the interests of the coloniser.
“Your essential role is to facilitate the task of administrators and industrials, which means you will go to interpret the gospel in the way it will be the best to protect your interests in that part of the world,” said King Leopold II.
“For these things, you have to keep watch on disinteresting our savages from the richness that is plenty in their underground.”
It was the need to spread Christianity that birthed missionaries like Archbishop Edward Paget who is regarded highly in the white community.
This week the book under review is Paget of Rhodesia (A memoir of Edward, 5th Bishop of Mashonaland) by Geoffrey Gibbon.
The book gives the life details of Paget who helped to spread Christianity in the then Rhodesia.
Son of the former Mayor of Great Yarmouth, Paget became the Bishop of Southern Rhodesia in 1925.
Described as one who was ‘especially concerned with the welfare of the African population and tackled mission expansion with zest and vigour’, one cannot help but question the sincerity of the Bishop.
Was he genuine or merely following King Leopold II’s advice?
When Paget came to the then Rhodesia, despite the teachings of the gospel that all men were equal before the eyes of God, the whiteman had separate churches from the blacks.
“The Cathedral was, and still is, a Parish Church for the white community and was at that time used only by white people, so that the authorities had not thought of inviting Africans to the service,” writes Gibbon.
“When Edward discovered this he insisted on Africans being invited, and his own story was that when the Cathedral authorities demurred he threatened to move his enthronement to St Michael’s, the little African church cum school in Manica Road.”
As much as this could have been viewed as a gesture to have the two races at par, the true reason for wanting the African more involved in the church is brought about later in the book.
Bishop Paget contended that it would have been easier to use black priests to lure more blacks to church than using white priests.
He was not sincere after all.
To ensure the ‘black priests’ felt important and not realise that they were part of a treacherous plan, Bishop Paget involved more blacks in parish work.
“Father Machiha indicates what African priests felt about the Bishop’s long struggle: Bishop Paget came to Rhodesia at the right time,” writes Gibbon.
“He championed that man is equal.
“He demonstrated this at Bishop’s Mount when our first Africans to be ordained had to sit at table with him and his guests, at times with Governors and important people from many parts of the world.”
But was sitting at the table with ‘Governors and important people’ all the black man needed?
Did he not deserve a say in the running of affairs of the country and determine how the natural resources of his country were used?
If Bishop Paget was sincere enough, why not work towards the development of the blackman?
Instead, Bishop Paget saw nothing wrong with the use of children as a form of labour.
In 1927 a Bill was introduced into the Southern Rhodesian Parliament to regulate the employment of juveniles.
“At once some people in England denounced it as condoning child slavery, but the Bishop in his address to the Synod, said that ‘the intention of the Bill was the enrichment and development of the African people, not their exploitation’ and his words were reprinted in The Times under the heading ‘Bishop Paget’s denial of slavery’,” writes Gibbon.
This shows Bishop Paget’s first priority was never the welfare of the black man, but the interests of the white man.
Despite spirited efforts by the men of cloth like Bishop Paget, the black man was not hoodwinked, but instead rose to fight the white man in order to attain independence.
Perhaps the time to change street names such as Paget, that runs parallel to Mukuvisi Woodlands, is long overdue.