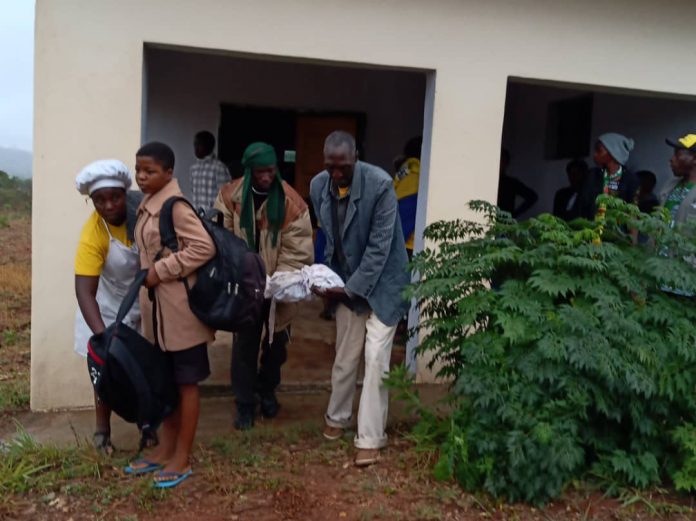 IT was a sombre atmosphere as more than 200 youths converged at Chimoio in neighbouring Mozambique to commemorate the 41st anniversary of the Chimoio attack.
Tears streamed down the cheeks of students from Magamba Training College and youths from Mashonaland West Province.
This was far worse than they had imagined and even their history lessons had not prepared them for what they saw at the shrines.
The 80-member delegation from ZANU PF’s Mashonaland West Province was led by Sarah Pedzisai Chikukwa, a co-ordinator for ZANU PF’s Chegutu District.
The night of November 22 2018 was characterised by singing and dancing to Chimurenga songs.
The atmosphere took a twist the next day (November 23) as Cde Pronica Chipwanyamabhunu, a former member of general staff (ZANLA decision making body) took to address the youths.
Cde Chipwanyamabhunu addressed people around 8am, the same time Chimoio was attacked by the infamous Rhodesian forces 41 years ago.
“I used to hear about the Chimoio attack, but did not understand the magnitude of the massacre,” said Welldone Magarangoma, a motor mechanic student.
“I am a totally changed person as far as my political orientation is concerned.
“Honestly no sane person can decide to sell-out after visiting this place where dedicated cadres’ blood was shed for us to be what we are today.”
In an interview with The Patriot in Chimoio, Cde Chikukwa said she organised this trip because she felt it was the only way Zimbabweans could honour the sons and daughters of the soil who died at the hands of Rhodesians.
Said Cde Chikukwa: “I advocate the day be made a public holiday because of its significance to our liberation struggle.
“I will continue with these programmes and now we are organising to visit Nyangau in Beira, Tembwe in Tete and Freedom camp in Lusaka, Zambia.
“These trips have helped shape perceptions, not only of the youths, but other senior citizens.”
Among the students from Magamba Training College were students studying motor mechanics, welding, building and auto mechanics, among other courses.
The students expressed gratitude to their school administration for organising the historic and educational tour.
The leader of the delegation from Magamba Training College, Faena Manesa, said the trip was educative and informative.
“This trip has made life easier for us teachers, especially on National Strategic Studies because students have practically seen what we teach them,” said Manesa.
“This has also benefitted the teachers because we have never been to this place.
“Our visit here was indeed enlightening because we have heard the story from the survivors and also seen the graves here.
“Politicians and European historians do not give us the details of the massacre here and other parts of Mozambique and back home.”
Youths who toured Chimoio urged Zimbabweans to visit liberation shrines and also help in maintaining them.
“It is my wish that this history be properly documented before the eyewitnesses die,” said Vincent Mukonowatsauka, a Gender and Cultural Research officer who was part of the organising team.
“I, as a cultural researcher, have learnt a lot from visiting these shrines because I get the historical accounts from eyewitnesses who survived the attacks.
“Visiting the place and seeing the graves gives a realistic picture of what really transpired here and the level of cruelty of Rhodesians on their attacks.”
Others present at Chimoio included members of the Zimbabwe Fallen Heroes Trust (ZFHT) who managed to exhume a freedom fighter who was attacked on that fateful day.
With the help of ZFHT, the Toda family from Takaidzwa Village in Gutu East managed to identify the remains of their relative, Cde Onani Toda, who was killed by the Rhodesians on the day of the massacre.
Plaxedes Toda, a niece of the late Cde Toda said she grew up being haunted by the spirit of her uncle.
She said the spirit would make her sick, or at times she would see her uncle in dreams telling her to tell family members to go to Mozambique to bring him home.
“We were happy as a family when we heard about ZFHT,” said Chrispen Maraire, nephew to the late Cde Toda.
“We approached Cde Evelyne Makwambeni who assisted us to come to Chimoio.”
“We are now going to bury the remains of my uncle back home in Gutu and we have at least found closure.”
Cde Makwambeni, the co-ordinator of ZFHT, brought wreaths which she laid on all of the mass graves.
“Although we have funding challenges, we try by all means to fulfill the promises we gave each other during the liberation struggle, thus giving decent burial to our fellow combatants during and after the war,” she said.
“We, as ZFHT, come annually to pay our respects to our fellow freedom fighters and recruits who perished here.
“We also come here for exhumations.
“I am happy today we are going back with one of our fellow comrade so that he gets a decent burial back home.
“Aluta continua!”