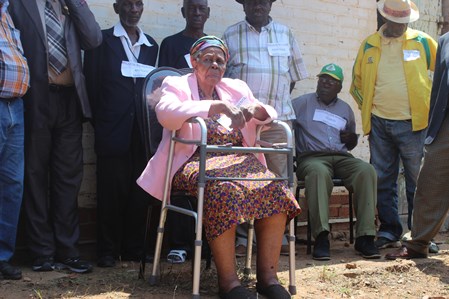 VETERAN nationalist and founder member of the National Democratic Party (NDP) Cde Jane Ngwenya has said President Mugabe is a principled man who has managed to stand for black empowerment during the colonial era and post independence.
NDP is the first African political party that was formed on January 1 1960 after the ANC was banned in 1951.
IN an interview with The Patriot, Cde Ngwenya who first met President Mugabe when he was 34 years old said the man possessed unquestionable leadership qualities.
“When I first met president Mugabe we were looking for a strong leader who could lead us in our struggle for independence,” she said.
“President Mugabe was young, learned and principled.
“He was not only intelligent, but strong of character as well and we knew we had found the leader we were looking for.”
Cde Ngwenya, now a member of the National Consultative Assembly, said she was arrested several times, but kept soldiering on inspired by President Mugabe.
She said the strength of a fighter comes from a capable and strong leadership.
“Although I was arrested many times I did not give up because I knew we were going to win the war one day because of our leader,” said Cde Ngwenya.
“President Mugabe was and is still a strong man who puts the nation first before himself.
“Imagine a man who leaves his teaching career in an independent and free country, Ghana and joins a hard and brutal liberation struggle.”
Cde Ngwenya wished President Mugabe a long life and urged youths to emulate his selflessness and learn from his life.
She said the country was still at war with the British imperialists who are now using puppet parties, particularly the MDC to reverse the fruits of independence.
To win the war, she said, Zimbabweans had to follow in the steps of President Mugabe.
“The war with the British is not over and the best person who can lead this nation through is President Mugabe,” said Cde Ngwenya.
“He loves his country and is not easily shaken.”
Cde Ngwenya said President Mugabe is a man of peace which is a big lesson for all Zimbabweans.
She said President Mugabe proved beyond reasonable doubt when he reconciled with the British after defeating them in the liberation struggle.
“By forgiving the Rhodesians after the war, President Mugabe wanted the country to progress,” Cde Ngwenya said.
“This was a clear sign of a visionary leader.”
The veteran politician applauded President Mugabe for being a symbol of unity.
She said President Mugabe taught the nation to live in unity and harmony when he signed the Unity Accord in 1987 between ZANU PF and PF ZAPU to form ZANU PF.
“I wish I could stop the hands of time to prolong the life of President Mugabe for the nation still has a lot to learn from him,” said Cde Ngwenya.
“This man is a selfless leader whose dream is to see the prosperity of this country and its people.
“I wish him many more years to come.”