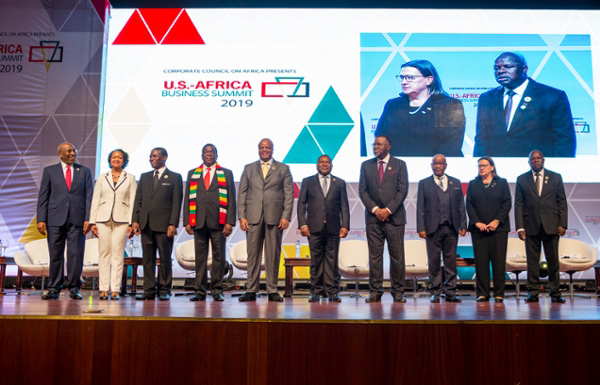 US$60 billion package that was availed by

the US at a recent summit are confirmation

that Uncle Sam will stop at nothing in

his quest to manipulate the world.

The US dangled the US$60 billion package

during the US-Africa Summit that was

held in Maputo, Mozambique, a fortnight

The plan was to counter a similar package

that China unveiled last year during

the Forum for Africa China Co-operation

China and it stands to benefit from the

On the other hand, with its aggressive

has been making overtures, albeit with

demands for reforms, aimed at realigning

its relations with Harare.

While Zimbabwe’s reform agenda has

gained traction, the US, feeling left out,

has been using all sorts of tactics to curry

favour with Harare; hence the attempt to

beneficiaries of the US$60 billion package.

And history is the best teacher, especially

when dealing with the US.

This is because, after imposing illegal

economic sanctions on the country on

refused to remove those sanctions, making

demand after demand as precondition for

the removal of the same.

But Zimbabwe has refused, rightfully

so, to give in to those demands which are

widely seen as an attempt to weaken the

bring Zimbabwe to the United Nations

(UN) agenda with a view to imposing

global sanctions on Harare, but China and

Russia vetoed the US’ vote.

Yet, America’s aggression knows no

Such has been the recklessness of the

US in its futile bid to control the world

that it has, time and again, used money

to either effect regime change, through

illegal means or simply by force.

The Maputo package is no exception.

at the Showgrounds, President Mnangagwa

revealed that the US had tried to accost

Zimbabwe to benefit from its package on

condition that Harare would vote alongside

Washington at the UN.

This would help the US sanitise its

it deems to be opposed to its hegemonic

When all is said and done, what the US

is offering Africa is dirty money meant to

finish off all those who stand up for what

is right. In reality, the US does not need

UN blessings to kill its opponents.

was killed by the US which had ignored

UN advice for an investigation into

allegations that the former Iraqi leader

President Mnangagwa revealed that he

met US Assistant Secretary of State for

Zimbabwe, what have we done wrong to

“You have prevented Zimbabwe from

accessing support from (the) World Bank,

have we done against you?

“There’s not time in history that we have

done anything wrong against you, so what

“There’s no time that Zimbabweans

have done wrong against you, so what is

“They just said submit your projects and

if they are accepted, you will be supported.

“But the Americans’ money comes with

preconditions they said when it’s time to

vote at the UN (on any issue), you vote

but we rejected that. When we vote, we are

guided by our national interest of Zimbabwe.

“We are a full member of the UN and

we can’t sell out. If the money has no such

preconditions, we can get it, but if it does

have preconditions to sell out, then we

Currently, the US is involved in futile

attempts to destabilise Venezuela because

of the latter’s vast oil deposits.

Consider the following Centre for Economic

Titled ‘The United States’ Hand in

provides some useful insights on how the

US manipulates its targeted countries so

that they loot resources.

“It used to be generally frowned upon

to openly call for military coups and US

intervention in Latin America,” reads the

At least not when it comes to Venezuela,

a country where according to the prevailing

narrative a dictator is starving the

population and quashing all opposition.

mentioned a ‘military option’ for Venezuela

from his golf course in New Jersey,

provoking an uproar in Latin America

but barely a peep in Washington.

of State, spoke favourably about a

that a coup or a foreign military

good thing have dotted the US media

Occasionally a pundit argues that

a coup d’état could have undesirable

consequences, for instance if a hypothetical

coup regime should decide to deepen

relations with China or Russia.”

What ED has done is to not only stand

up to the US but stand on the moral

pedestal, which move will, in the long run,