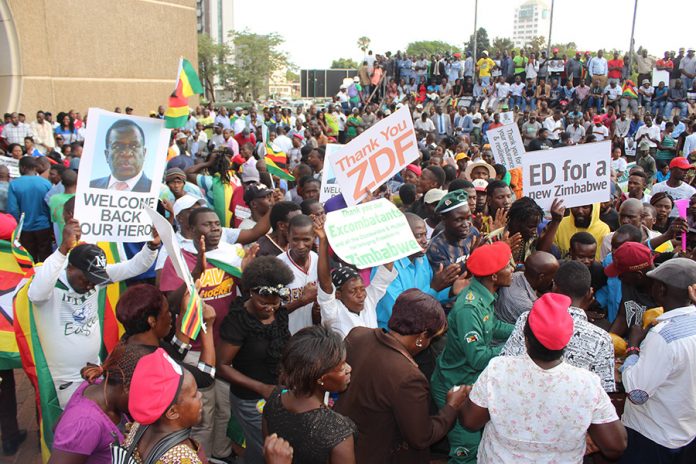 I OFTEN wonder whether I am living on the same planet or in the same country with some of these so-called independent media institutions.
Their wishful thinking and fake news is a clear case of pure political fantasy.
Below we look at some sentiments from one weekly which sadly makes very poor reading.
“Although former president Robert Mugabe’s dramatic return to active politics has been dismissed by ZANU PF as inconsequential, some analysts are convinced that he could inflict significant damage on the ruling party in the three politically restive Mashonaland provinces.”
Now, here is a cocktail of wishful thinking, fake news and pure lies.
There is no evidence to show that the so-called Mashonaland provinces are ‘restive’.
What is happening in the above three-mentioned provinces is no different to what is happening in ZANU PF’s seven other provinces of Harare, Bulawayo, Masvingo, Midlands, Manicaland, Matabeleland North and South.
Currently there is no ‘restive’ ZANU PF province.
Now, if the situation for ZANU PF in all the 10 provinces is not ‘restive’, why then is the so-called private media and their writers picking Mashonaland provinces as some special cases totally different from the rest of the country?
Here is the answer they provide: “During his (Mugabe) rule, he Mugabe predominantly held sway over the Mashonaland Constituency (ie Mashonaland West, East and Central) where (President) Mnangagwa is perceived to be unpopular (sic).”
What about other provinces?
Wasn’t he (Mugabe) voted into office by the seven other provinces when he got in office every five years?
Was he voted into power by Mashonaland provinces only?
Isn’t it a fact that he was always voted by all the 10 provinces.
Now if that was the case, what is the agenda here where only three provinces are being picked as ‘Mugabe provinces’ where President Emmerson Mnangagwa is said to be unpopular?
Answer – tribalisation of ZANU PF politics by the so-called private media.
Now this is the question: Is it true that Mugabe was the love of all Mashonaland provinces while President Mnangagwa was unwanted?
No!
The so-called private media has a very short memory.
Whenever a book on the story of Mugabe’s political demise is finally written, the first chapter will have Mashonaland Central as the heading.
It was Mashonaland Central who fired the first decisive shots which signaled the beginning of the end of Mugabe.
It was Mashonaland Central which was the first province to rise up against Mugabe when they booted out the leader of Mugabe’s G40 cabal Saviour Kasukuwere.
They were joined in their uprising by all their MPs in the province.
From then on, Mugabe’s fate and his G40 friends had been sealed.
For in no time, all the provinces, except Bulawayo, voted Kasukuwere to go and by extension, as history showed later, Grace Mugabe and Mugabe himself were also voted out.
Furthermore, last November when the entire country rose up demanding Mugabe to go and in the end ZANU PF decided to remove him from power, every ZANU PF province including Mashonaland provinces voted enthusiastically to remove Mugabe from power.
It is therefore malicious for the so-called private media to insinuate that Mashonaland provinces will act ‘tribally’ no matter what happens because in their minds he (Mugabe) is their so-called Zezuru son while President Mnangagwa is a Karanga.
Facts show above that those provinces never act tribally.
The so-called independent media is wrong to suggest that in this day and age, tribalism will be in the minds of voters as they go to the polls.
We now come to another falsehood in the private media.
Here it is: “Mugabe has met his former deputy Joice Mujuru at his Borrowdale home.
Mashonaland Central is now under the control of Mujuru through her National People’s Party.
Mashonaland Central support is already taken by Mujuru.”
Here is wishful thinking of the worst order.
Here is the most unwanted politician in Mashonaland Central, Mujuru, being touted as the most loved of them all in that province.
Mujuru’s political history in Mashonaland Central is very well known and documented.
The people in that province don’t like her.
Don’t forget Mujuru holds an unenviable record of being the only ZANU PF leader of a province in the history of ZANU PF from the politburo to lose a parliamentary primary election to an ordinary card-carrying member, Christopher Kuruneri, in a Mashonaland parliamentary constituency named Bindura/Mazowe constituency years ago.
Former president Mugabe had to intervene and went on to ban Kuruneri from standing for flimsy reasons and then imposed Mujuru as the MP for Bindura/Mazowe.
Not to be left out on wishful thinking is Ibbo Mandaza when he says: “The impact of New Patriotic Front (NPF) supported by Mugabe is to exacerbate the division of ZANU PF.
It reflects the disintegration of ZANU PF.
The disintegration began with the ousting of Joice Mujuru.
It has left ZANU PF in tatters.”
If wishes were horses, beggars would ride.
However, Mandaza will never ride a single horse in his lifetime because his wish that ZANU PF will be left in tatters is never going to happen.
How can a Party with a Government which has managed to lure more than US$3 billion worth of investment in three months crumble when the whole of last year, less than US$2 billion was realised?
How can a ruling Party with a Government which has succeeded in luring the biggest company in the world General Electric into Zimbabwe be in tatters?
How can a Party with a Government which has revamped the railways, which are running again, be in tatters?
How can a Party with a Government which has re-engaged with everyone big and small in the world today be described as being in tatters?
How can anyone describe a Party whose structures from the cell to the politburo are functioning round the clock ready for the coming general elections be considered to be in tatters?
Isn’t all this wishful thinking and fake news?
Zviroto zviroto!