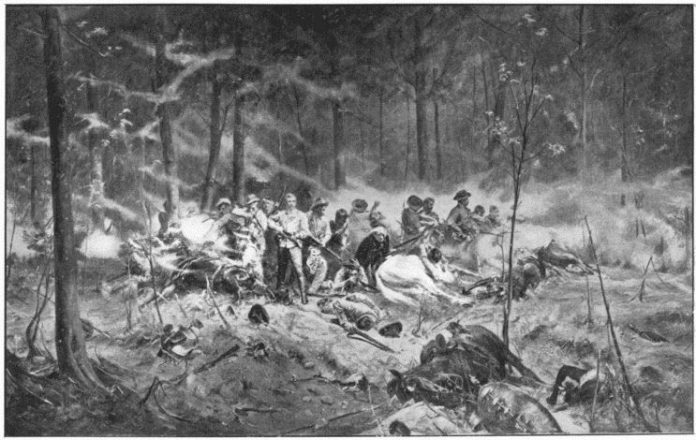 AS Forbes’ Column was going through the last bush before they got to the Shangani River, five or six Africans appeared before them and disappeared into the bush.

Soon after, there was sporadic firing at the Column.

Again, 50 Africans and two others on horseback just appeared and went their way.

These would seem like random, sporadic apparitions, but these Africans knew that the Ndebele nation was at war with the whiteman.

There was no peace in the land.

Their king had left their capital; things were not right and the whites were not friends but their worst enemy, lethally armed and so they would not just lightly spirit themselves before the whiteman.

The Africans knew what was going on.

They were looking out for their king; appearing and disappearing before the whiteman from nowhere unnerved the whitemen, consternated them such that they never knew what was going on, what to expect.

Thereafter, Forbes and his Column came upon a recently deserted settlement, with fires still smouldering, then a large herd under the care of a mounted man and two herd boys.

They captured one of the herd boys who, on interrogation, said the  king’s camp was just ahead and that he, in fact, had been at the deserted camp that afternoon.

The boy said the king had a letter for Jameson; he did not want to fight and was coming to Bulawayo.

Such information gave the impression of a King Lobengula who was tired of being in flight and prepared to surrender.

But why would a herd-boy be privy to such important sensitive information?

Why would a seasoned fighter such as King Lobengula leave a herd on the trail?

King Lobengula was weaving a web they would never be able to get out of.

Acting on the information from the captured herdboy, they went to the camp just ahead, which he said was the King’s.

Writes Forbes: ;.In one of the huts they found a slave boy asleep.

They surrounded him and interrogated him and he told them the king had left the day before with wagons and had not returned, that he had about 3 000 forces with him.

But the fires were still alight!

And why would one boy be left alone in the camp, so totally vulnerable?

Had Forbes and his men been less arrogant, they should have realised that something was too conveniently placed in their path. Surely the slave boy had been left there to confound the arrogant pursuers of the king.

Forbes’ Column floundered on, did not know where the king was despite that many ‘informers’.

They did not know he had crossed the Shangani River.

They were surrounded by the king’s people who had proven to them that they were not travelling in Lilliput, the land with no people.

It was a land with people and these people had a king whom they valued above the white people.

After that, Forbes dispatched Major Allan Wilson to track the king’s spoor, with orders to be back before sunset.

Wilson never came back; he felt he was too close to victory and was itching to capture the king.

He sent men to ask Forbes to reinforce him.

Forbes dispatched Captain Borrow with 12 of his best horsemen to reinforce Wilson but would not move the Column that night for he feared an attack any moment.

‘Informers’ had told him King Lobengula had despatched an impi of 2 300 forces with orders to attack that night.

The impi was just behind the Column, they said.

This had the desired effect.

Forbes and his Column were frozen in their tracks.

He so feared the ‘imminent attack’ that he did not dare move the Column that night to reinforce Wilson in the assault on the king. He had the strongest feeling of foreboding.

King Lobengula was not idle and had not been idle.

He was not frozen in fear and in flight as purported.

He was fighting the whiteman and had spread the net and was just pulling in the haul.

Instead, therefore, Forbes that night laagered his Column 200 yards from the river, out in the open.

That evening of the eve of the assault on the king, Wilson crossed the Shangani River and ‘stumbled’ on an African man who told them the king had just a few men with him and was just ahead, and volunteered to take them to the King.

It is amazing Wilson and his men still believed it was normal they would keep stumbling on informers just at the right time in the right place.

For a major (Wilson) to take it so simply defies imagination.

At the king’s camp, the ‘guide’ took Wilson and his men through several settlements filled with women, children and cattle.

As they passed through the scherms, they were shouting: “We are not hurting anyone we want to speak to the king!”

“By the time they got to the fifth scherm, it was nearly dark, and the natives from the scherms they had passed through began to run up from behind them with rifles and Major Wilson ordered a retreat,” reports Forbes.

But before they retired, their ‘voluntary guide’ had shown them ‘a scherm with a high fence around it’ and said it was the king’s and his wagons were there.

There was a very heavy storm after they retired and it became very dark.

But why would a king in flight travel with a huge contingent of women, children and cattle; at what pace would he then travel?

If he was fleeing, what he would need would be the fastest horses, forces to protect him and provisions, not settlement after settlement.

At dawn, Wilson took his men including Captain Borrow and his 12 best horsemen and went to the king’s scherm.

When they got there, they called out to the king but it was guns which replied.

The entire Wilson Patrol was wiped out, except three of Borrow’s men who survived to tell the story.

King Lobengula, with the assistance of his people had successfully lured his pursuers to their death; he annihilated them.

They did not capture him.

They did not succeed in taking him prisoner so they could kill him and shame the Ndebele nation.

Instead they perished at his hands.

That was the end of the pursuit.

In his strategic retreat, King Lobengula had a clearly laid out plan.