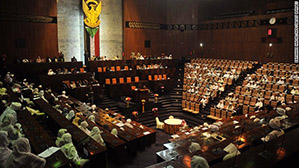 THE inauguration of Omar al-Bashir as President of Sudan last Tuesday, June 2, was an eye-opener into the complex world of Arab politics. For instance, the ceremony, in the National Assembly, was conducted in Arabic without any English translation. That meant those of us unable to understand the language had to devise our own means to follow the proceedings. Unlike Nigeria the previous week where there were over 50 Heads of State, in Khartoum there was a handful: the Chairman of the African Union (AU) and Zimbabwe’s Robert Mugabe, Egypt’s Abdel-Fattah el-Sissi, Kenya’s Uhuru Kenyatta, Ethiopia’s Haillemarian Desalegn and a few others. But like Nigeria’s Buhari, Sudan’s Omar al-Bashir initially came through a military coup in 1989 before he swapped the military uniform for civilian clothes, re-engineered himself and was elected leader of the National Congress Party. And then there was the election where he garnered 94 percent of the votes. The ceremony was brief, slightly over one hour. What was surprising about it was the number of women elected into the National Assembly; nearly as many as the men. Because Sudan is an Islamist state, the perception is that state affairs are predominantly a male domain. The presence and election of such a big number of women into parliament was therefore quite a surprise. Sudan is at war with itself. It has been at war with itself for a long time. First there was the war that ended with the south breaking away to form South Sudan in 2011. Then there is the war in Darfur that started in 2003 and has resulted in al-Bashir’s controversial indictment at the International Criminal Court (ICC) for human rights abuses and crimes against humanity. There is also the on-going armed uprising in the Blue Nile and Kordofan regions to the south west of the country that he is battling to put down. It was against this background that the opposition boycotted the elections. In his inauguration speech, President Omar al-Bashir promised to end the conflicts. In Khartoum, there is very little evidence to show that Sudan was once a British colony. There is little trace of the presence of the English language on the streets. Those that could speak the language seemed to have a negative attitude towards it because they didn’t want to speak it. For instance, the taxi driver who took us back to the hotel from the inauguration at the National Assembly corrected us in English when we mistakenly agreed the Blue and White Nile met before the Nile River got to Khartoum. “The confluence of the White and the Blue Nile is here in Khartoum,” he said in perfect English. Why had he pretended he couldn’t speak it at the beginning? In Khartoum, you get the distinct feeling the people want to belong more to the Middle-East and the Arab World than to Africa. Sudan is a vast desert and Khartoum is the colour of the desert — a shimmering endless brownish grey. The buildings were predominantly brown with brown roofs. The National Assembly were the inauguration took place was brownish in colour and the hotel we stayed was also brownish. The dust blowing in the wind added a deeper tinge to the prevailing brown. The air was hot, brittle and dry. Life in Sudan depends and revolves around the Nile River. It is easy to see how some things can become so revered and elevated to the status of god. If the Nile dies, so too does the Sudan. Because Sudan borders the Red Sea to the north, British interests in Sudan were largely about protection of the Suez Canal that connected the Red Sea to the Mediterranean Sea and shortened the journey to India and the Far East by more than half. Initially, the route went around Africa and the Cape of Good Hope. The Suez Canal was opened in 1869. But even without the Suez Canal, Sudan had been an integral part of Cecil Rhodes’ dream of establishing a British Empire that stretched from the Cape through the Rhodesias and Nyasaland, through Tanganyika and Uganda, through Sudan and finally to Cairo. Sudan is straddled with seemingly insurmountable problems. But judging by the way President al-Bashir was prepared to let go South Sudan in spite of the fact that part of the country held the bigger portion of Sudan’s oil reserves, the man’s pragmatism has a realistic chance of solving the problems. For views and comments, email: alexkanengoni@gmail.com