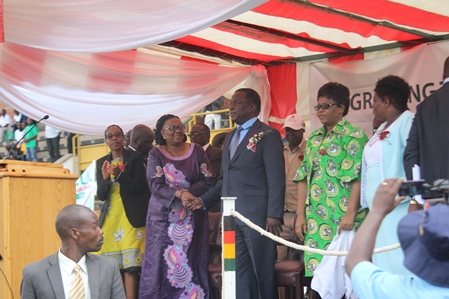 THE most notable outcome of Monday’s Workers’ Day celebrations, in the eyes of the sponsors and authors of the Daily News story on Tuesday, was the vain attempt to personalise the event and prepare ground for the launch of the vote-rigging mantra they have come accustomed to feeding Zimbabweans with each time there is an election.
While it is true there was an unusually low turnout at Rufaro Stadium on Monday, it is the cheap propaganda that seeks to reap political capital out of the presence of Vice-President Emmerson Mnangagwa, which exposes the desperation of agents of regime change.
There was a ‘feel-good’ factor from the sponsors of the story that VP Mnangagwa had been ‘embarrassed’, but this is one pack of crude propaganda that will return to haunt them in spectacular fashion.
This is because from the horizon, sounds of drums of the 2018 harmonised elections kept on increasing in sound and intensity.
Someone listening could have signalled that there is a loudmouth and opportunist called Morgan Tsvangirai eagerly waiting to seize any opportunity presented to him.
This is because by throwing in arguments of the ‘electability’ or lack thereof of certain individuals on the basis of Monday’s scenario, then the same proponents of that argument are endorsing Tsvangirai’s bid for presidency in 2018.
Tsvangirai’s Zimbabwe Congress of Trade Unions (ZCTU) had a near capacity crowd at Gwanzura Stadium the previous day.
Does this mean Tsvangirai is electable if the numbers at Gwanzura are anything to go by?
This is one of the questions that must surely be haunting those celebrating the Monday saga, especially if they are within the establishment.
Yet the point must be made.
This was not a personal event.
It was a programme meant to re-establish the connection between Government and workers.
It was an occasion for Government to assert its position with regards to workers’ safety, protection and the future.
And it was done with poise.
The illegal economic sanctions which have been an albatross on the already burdened necks and shoulders of workers continues to be the bane of Government’s efforts to improve livelihoods across the board.
Production, which is key to the much needed economic development, has been severely negated.
Growth of industry, which is the epitome of development, has been stagnated by the widely discredited sanctions.
Social cohesion which is a stimulant to socio-economic transformation has been torn apart.
But workers have remained resilient in the face of these ominous challenges.
At the top of the situation is the Government which has remained steadfast in its resolve to attend to the plethora of challenges confronting workers in their generality.
This was the message at Rufaro Stadium on Monday.
This is the message that should be embraced by all progressive minds across the length and breadth of the country.
The event on Monday was about the coming together of stakeholders from all sectors of the economic spectrum to celebrate, reflect and plan the nexus between Zimbabwe’s internationally renowned human resource capital and the economy.
But there is a threat to this congregation of progressive minds going forward.
“Our Government has in the last 16 years battled the scourge brought about by the cruel, deleterious and illegal economic sanctions,” said VP Mnangagwa who was the guest of honour at Rufaro Stadium.
“As a nation, we have together endured the challenges, burdens and pains experienced during this period which has been characterised by a protracted attack on every sector of our economy extending the moral and ethical fabric of our society as a whole.
“You workers of Zimbabwe were not spared.
“You endured the pain of going without adequate food, medicines and school fees for your children and decent housing, coupled with dwindling incomes.”
Then there was the sweet news.
The assurance by Government that it has never been blind to the workers fate and that it is working flat out to deliver to the employees.
There is an array of programmes and policies in place to cushion workers from the menaces brought by the sanctions, said VP Mnangagwa.
“In 2013, the country adopted a new home-grown Constitution Amendment (No. 20) Act, which was indeed a product of extensive consultations with all sections of society, including workers,” said VP Mnangagwa.
“This resulted in the enshrinement of the protection of worker’s rights in the country’s Supreme Law.
“Equally in 2013, Government adopted the economic blue-print, the Zimbabwe Agenda for Sustainable Socio-Economic Transformation (Zim-ASSET), ‘towards an empowered society and a growing economy’.
“Since the period of independence in 1980, Government has been concerned about the plight of the worker and has cumulatively and gradually introduced landmark pieces for their welfare.
“The labour landscape was drastically transformed; from the repeal of the obnoxious Master and Servant Act, the Native Juvenile Act and the African Recruitment Act to the amendments of legislation such as the Industrial Act and Minimum Wage Act, which laid down minimum conditions of employment, introduced industrial holidays for all categories of workers without loss of wages.”
For workers who fell victim to the infamous July 17 2015 Supreme Court judgment which resulted in job terminations, Government has since disbursed US$5 million to the Small and Medium Enterprise Development Company (SEDCO) to provide capital to affected workers.
In the end, it would be recorded that Monday May 2 2016 was the day Government planted the first seeds towards the rebirth of its relations with workers.
This was and will be an inclusive affair.
Let those with ears listen.