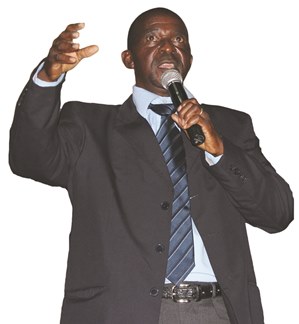 PRESIDENT Robert Mugabe turned 90 years on Friday February 21 2014.
His life has been described by people as ‘amazing and well lived’ and as the norm, the colourful 21st February Movement celebrations were held this year in Marondera on Sunday at a packed Rudhaka Stadium.
However, Kushinga Phikelela Polytechnic had the honour to host a public lecture on President Mugabe and the Third Chimurenga on his birthday Friday 21 2014.
In a speech read on his behalf by the director of finance and administration in the Ministry of Youth Indigenisation and Empowerment, Emmanuel Nwarati, the Minister of Youth Indigenisation and Empowerment, Francis Nhema encouraged the youths to emulate President Mugabe’s ideals.
He said it was important for Zimbabweans and youths in particular, to uphold unhu/ubuntu like President Mugabe, by desisting from corrupt activities.
“His Excellency has not only spoken against corruption, but has also walked the talk,” said Minister Nhema.
“For example, in 1987, he was offered US$30 million by America in return for non-intervention in Apartheid South African affairs, but he refused.
“He chose to stand by his black brothers in their struggle for independence.
“He said we would rather have poverty and hunger than receive lucre in purchase of our sacred principles because our humanity comes first and black is far more beautiful than the American dollar.”
Minister Nhema described President Mugabe as a selfless, hard working, fearless, patriotic and exemplary leader who is committed to the total emancipation of Zimbabwe and Africa.
Speaking at the same occasion, Bindura University Acting Dean, Faculty of Social Sciences and Humanities, Professor Charles Pfukwa said as the nation celebrates President Mugabe’s birthday, there was need to go beyond the celebrations.
He said youths must always remember that as the future generations, the future of the nation lies in their hands.
“We have a heritage, a legacy that we need to carry and pass on to future generations,” said Prof Pfukwa.
“It is anchored in our Zvimurengas, struggles.
“We are currently immersed in the Third Chimurenga and who knows, at some point we will talk of a Quad Chimurenga era-an intellectual revolution.”
Prof Pfukwa who is also the Editor of The Patriot said as Zimbabweans celebrate President Mugabe’s birthday, they were actually celebrating being Zimbabwean.
He said no one will come and sing the Zimbabwean song for us before taking a swipe at the Western media for tarnishing the image of President Mugabe.
He encouraged students to stop seeing President Mugabe through Western lens.
“The images of President Mugabe that we have been given are through a Western lens,” said Prof Pfukwa.
“We see him through their eyes and not African eyes.
“They have often been negative and this is very deliberate.
“Why should vasinamabvi and the West appreciate in a man who has steadfastly stood for the down trodden, the landless.
“This is a man who has stood up to the former colonisers and all their dreams of siphoning our natural resources.”
From the days of the liberation struggle, said Prof Pfukwa, President Mugabe always emphasised that cadres must be disciplined.
He said it was imperative for youths to emulate the life of President Mugabe in order for them to have a bright future.
Prof Pfukwa quoted President Mugabe’s speech at the historic Chimoio address of August, 1977.
“Internal discipline is an internal state of order within an individual that propels him to do the right things,” said President Mugabe.
“It is a stage of development within the individual that resolves contradictions within him.”
President Mugabe, said Prof Pfukwa, is a visionary man whose dream is to see the total independence of Africa, especially in this era of economic warfare.
Meanwhile the national chairman of the Zimbabwe War Veterans Association, Cde Jabulani Sibanda said President Mugabe has fought for our identity.
He said President Mugabe is a selfless leader not of Zimbabwe, but Africa.
“The revolution is not yet complete because we are still fighting for economic independence,” said Cde Sibanda.
“We must fight this war united because our revolutionary icon President Mugabe is a peaceful man.”
The secretary general of the Zimbabwe Congress of Students Union (ZICOSU), Leopold Chakanyuka who organised the public lecture said most youths are being misled by the Western media.
He said the country’s history must be taught in schools in order to enhance patriotism within youths.
Chakanyuka said it was an amazingly good thing to see President Mugabe fit and strong at the age of 90.
He said youths still have a lot to learn from President Mugabe’s principles.
“The land is a heritage which President Mugabe and ZANU PF gave to the people hence it is now the responsibility of the youths to jealously guard this rich heritage.”