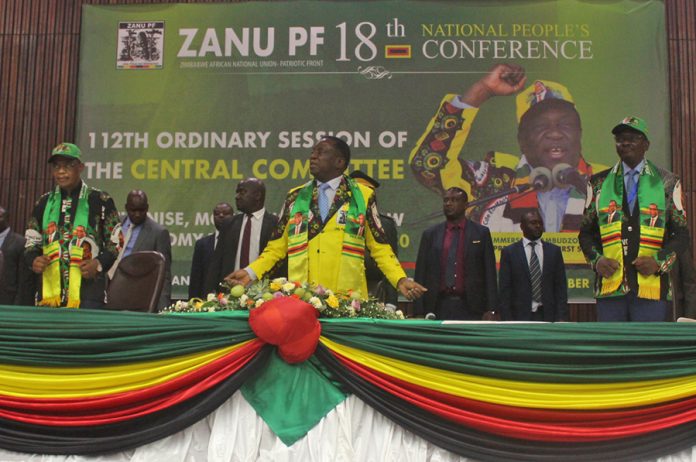 THE delegates’ faces said it all at the end of the indaba.

An enduring spirit of delight, satisfaction and a seemingly unbreakable sense of unity was pervasive in Goromonzi.

The spirit permeated every corner and space the delegates occupied at the sprawling Goromonzi High School, the venue of the historic ZANU PF gathering, commonly known as the National People’s Conference.

Every four years, ZANU PF members gather for that indaba.

They come up with resolutions and commitments for the year ahead.

Events and targets of the previous conference come up for discussion, normally ending there.

There was something unique about this year’s gathering, an overwhelming sense of a Party on an unstoppable path to transition and a Party that is firmly on course to reconnect with the people.

There was an unmistakable air of the rebirth of the people’s dream, awakening and transformation from mere talk to real tangibles.

That transformation has been seamless since the successful execution of the historic Operation Restore Legacy (ORL) which catapulted President Emmerson Mnangagwa in November 2017.

In Goromonzi, there was deafening confirmation that ZANU PF is the future of Zimbabwean politics.

Goromonzi, like many places in the country, offers unique scenery with its inimitable beauty.

The thick lush green veld replicates the lively discussions that were taking place in the Mashonaland East Province.

Something grips the minds as they forage their way to Goromonzi High School.

The road stretches, it meanders and swivels right to the very heart of that iconic school.

It replicates the history of our Zimbabwe which has had phases of disturbances sponsored mainly by colonialists and now the neo-colonialists who have yet to hide the barricade they have placed between the people’s dreams and their glittering tomorrow.

The future is bright.

And this is the future that was being nurtured in Goromonzi last week.

The message too was clear.

ZANU PF is still very much alive and is not departing the political scene now and in future.

All the people of Zimbabwe have to do is to revel in the impending future of hope  and plenty.

“We must each play our part in ZANU PF. Tinoti iwe neni tine basa,” said President Mnangagwa, addressing delegates during the closing session of the Conference on Saturday last week.

“What message will you carry home?

“Go back home and tell the people that: one, the Party is alive, ZANU PF imhenyu.

“As we come to the end of this mega event, let these resolutions that we have made here embolden us and inspire action.

“These conferences are not talking shows.

“We must deliver on our promises.

“To this, we must remain focused, united and guided by our Party constitution.”

“We have reached the end of this conference.

“This conference is the biggest conference of any political party that may come into your mind.

“If there is any, please tell me.”

President Mnangagwa had a message for those who have been engaged by the West to embark on a sustained media onslaught against the country, ZANU PF and its leadership.

The Patriot has written extensively about spirited efforts by Western countries to destabilise both the ruling Party and the country.

Several prominent figures in the so-called civil society have been brought into the fray as the West ups the tempo in its bid to effect regime change in the country.

Recently, this publication carried an exposé of the role of the US in its new project to tarnish Zimbabwe and its leadership via social media.

Several regime change activists have since been recruited and trained to carry out the project which is also aimed at mobilising urbanites and youthful voters ahead of the 2023 harmonised elections.

Zimbabwe has to be wary about these activities, said President Mnangagwa.

“There are others who are not here who write from wherever they are after smoking dagga,” he said.

“Let them write and smoke as we do our work in peace, as we look for ways to ensure we develop this country.

“Doing so in peace to ensure that the war that we fought to free this country and the legacy that we gave to our people be guarded, and that there is no enemy to take that legacy away from you.

“No one will take the legacy of freeing the country from ZANU PF.

“Disloyalty and raw deeds of any kind must be corrected.

“The unity, rejuvenation and strengthening of Party structures must continue to be our priority.

“We all must recruit more members.”

As delegates trooped back home, the rains continued pounding the country and washing away the hardships wrought by the Western-imposed sanctions.

The future looked brighter than ever.