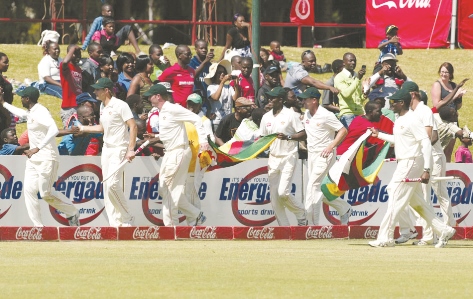 By Patience Rusare and Alvin Madzivanzira

AT first glance, it might look like a financial crisis, but looking deeper reveals more.
One might say it is sabotage.
The origins of the ‘crisis’ that has enveloped Zimbabwe Cricket (ZC) can be traced back to the Land Reform Programme in 2000.
It was even made worse by the adoption of a race quota system which did not go down well with the then white dominated management and team.
They had made cricket a white preserve arguing, through behaviour and attitude, that blacks were not good enough.
When blacks came into the team, the whites rebelled and it did not end with them quitting.
The West made it their mission to destroy Zimbabwe’s cricket, supporting their disgruntled and angry kith and kin.
Both then, British Prime Minister Tony Blair and the Australian Prime Minister John Howard just before the 2003 World Cup stopped their cricket teams from travelling to Zimbabwe.
Zimbabwe co-hosted the World Cup with South Africa.
Zimbabwe’s fixture with England was a walkover and the hosts were granted the game.
They claimed that Zimbabwe was not a safe destination for their teams.
This was a big blow.
And Zimbabwe’s woes are far from over if the recently leaked 21-page document drafted by Australia, England and India is anything to go by.
The Finance & Commercial Affairs (F&CA) Commercial Rights Working Group position paper, presented to all full members of the ICC at a little-publicised January 9 meeting in Dubai, is set to return cricket to the days when Australia and England ruled supreme over administration.
In an ironic twist, India which fought so hard to abolish that old system is now a part and perhaps leader of this emerging oligarchy.
The paper also calls for the current Future Tours Programme (FTP), the international calendar of the game, to be scrapped and taken out of the control of the ICC.
“No member should be forced to play another member except as bilaterally agreed,” the draft reads.
“No member should be forced to host uneconomic tours.
“There should be no ICC FTP regulation or central FTP agreement between ICC and full members.”
The current FTP, though its enforcement is erratic, sets basic parameters of bilateral engagement over an eight-year period: each full member must host and visit every other full member at least once in that period.
In the newly proposed FTP, set over a minimum four-year period, “CA and ECB will offer a guarantee of three Tests and five limited-overs matches per cycle to the top 8 members.”
The move solidifies growing fears that the three boards are happy to play each other as often as possible as their encounters are highly lucrative financially.
But the teams will not be compelled to tour lesser full members.
The sad reality is that this proposal will cripple countries like Zimbabwe, Bangladesh, West Indies, Pakistan, Sri Lanka, New Zealand and South Africa.
The fact that FTP is to be scrapped; one does not see India, England and Australia coming to table an offer for Zimbabwe.
Tours of big cricket-playing nations means a lot of revenue can be realised by the host country through TV rights.
Zimbabwe’s financial situation has seen it not able to host more than three nations per season and the new proposal will segregate lowly-ranked nations like us.
The ICC wants to make this an exclusive club of Test playing nations who are well financed and have the resources.
Developing countries will play each other, leading to very few profitable tours.
Zimbabwe which is already in the red facing a debt of US$15 million, face a heavy blow if this proposal is to be approved.
The Zimbabwe debt situation has been compounded by the fact that there have been very few international tours and very few profitable tours.
And that, in turn, has meant that players have not been paid on time.
Currently, a vast portion of the money from all ICC events is divided equally among all full members and the remaining given to associate and affiliate nations.
In this new plan, subtitled “ICC distribution ranking system – Meritocracy not just Membership”, the boards that earn the most revenues for an ICC event, will be entitled to the greatest returns.
ZC has asked the International Cricket Council for an additional loan of US$3 million, but it is said the international body may only agree to that if ZC provided an audit of the funds they received from the Targeted Assistance and Performance Programme earlier last year.
ZC is currently struggling to pay players and officials threatening the resumption of the domestic cricket league.
The five franchises are not in action following an impasse with ZC over outstanding salaries.
As a result ZC has postponed indefinitely the domestic league.
The situation has multiple repercussions on the national teams the five franchises act as a feeder to the flagship team.
The national team has an international T20 tournament to be hosted by Bangladesh in March.
With a myriad of challenges facing the gentleman’s game, ZC will need to act swiftly and address the situation before Zimbabwe is relegated to the cricket dustbins.
Additional information sourced from: https://criczim.com/india-australia-and-england-in-attempt-to-take-control-of-cricket/