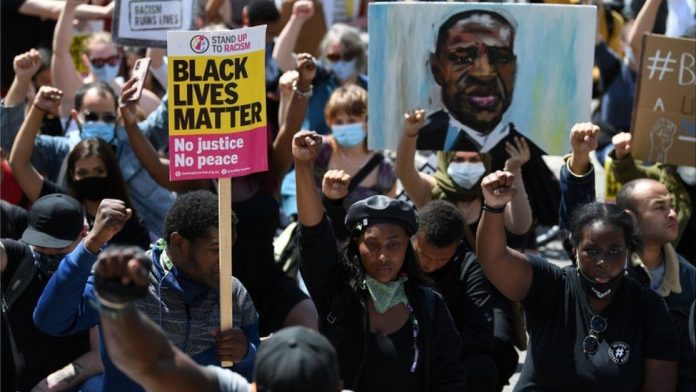 NEVER in the history of the world did such a death unite the whole world in a show of love and concern.

The death of George Floyd, an Afro-American, under the cruel knee of the police in the US has brought people of all colours together.

A shocking murder, caught on video in the US, sparked protests all over the world and it ignited a fierce debate over Britain’s history.

Many Zimbabweans in the UK have experienced racism first hand.

Cases of being arrested for being black abound.

Our children are harassed in the shops and on the streets.

Black children have been made to feel inferior by the system.

The brutal, evil and demonic killing of Floyd coupled with the lack of remorse by the officer showed that there are still white people who are not willing to be reasonable.

An academic at the University of Manchester and an organiser with the Racial Justice Network states that: “Incidents (of racism) are increasingly being recorded in the UK, such as the footage of a Zimbabwean, Desmond Mombeyarara, being tasered in front of his five-year-old son in Manchester last month. Police are investigating the incident. If he was not a blackman, Mombeyarara’s case would have been resolved by now. Mombeyarara is a Zimbabwean who was racially abused, physically tortured and electrocuted by a taser for a simple traffic offence, in front of his child, by the roadside. People are starting to connect the dots with what’s going on in the UK,” says Dr Joseph-Salisbury,

Dr Joseph-Salisbury says it has sometimes been more difficult to mobilise UK protesters in the past.

“Britain likes to think of itself as being much less racist than the US,” he says.
In 2019 alone, over 50 Zimbabweans were racially abused by the police without recourse at law.

The police have always abused blacks in police custody, away from cameras.

Since 1990, there have been 1 743 people in England and Wales who died following contact with the police, according to the Charity Inquest.

Blacks have always been treated as non-humans.

We have had several Zimbabweans languishing in prison in the UK simply because they were born black.

The death of Floyd gave Zimbabweans a chance to protest and show their frustration with the police.

Ken Fero, a spokesperson for the United Friends and Families Campaign which represents those whose loved ones have died after contact with the police, said there is increasing evidence of deaths while in police custody.

“With the young people who are protesting at the moment, and it does seem to be young people, there is a stronger sense of history and consciousness than there has been in the past,” said Fero.

Many Zimbabwean children born in the UK, and have lived under discrimination, have joined the protest without hesitation.

Zimbabweans found an opportunity to make the names of those who died due to police violence a focus of demonstrations and online activism; they joined hands with the (hashtag) #saytheirnames.
The demonstrations have given Zimbabweans in the UK hope that their relatives have not died in vain.

The idea of being treated differently because of your colour is obnoxious. Lockdown has made people more confrontational and courageous.

Protesters have said both of these ‘deadly pandemics’ (racism and coronavirus) must be tackled together, as data has shown black Britons in England and Wales have been nearly twice as likely to die with the disease as white people.

In the UK, over 72 people of Zimbabwean origin died of COVID-19.

The British Government’s review into the impact of coronavirus on ethnic minority communities told a similar tale of social and economic inequalities, with poverty, overcrowded housing and being employed in lower-paid or key worker roles being put forward as factors for this disparity.

People from black and ethnic minority groups have also been hit harder financially during the crisis, as research has shown they are more likely to be working in shut-down sectors or precarious jobs.

Many white people have been protected from the vagaries of COVID-19.

The way they do it is so hidden one may not even see it.

Two moths ago, a black railway worker, Belly Mujinga, died of COVID-19 after reportedly being spat at, by a whiteman.

More than 1,5 million people have since signed a petition calling for ‘justice’ for the 47-year-old Zimbabwean after the British Transport Police closed the case due to ‘insufficient evidence’.

Even though there was evidence of spitting, the deceased’s colour blinded reason. The events in America have activated the zeal to want to understand the colonial past of Britain.

Even before the UK had a Black Lives Matter movement, it had the Rhodes Must Fall campaign inspired by similar movements in South Africa; it sought to remove the statue of Oriel College’s imperialist benefactor Cecil Rhodes and to reform Oxford University’s curriculum to focus less on white Europeans.

Surprisingly, the skeleton of Rhodes is safe In Zimbabwe while Ambuya Nehanda’s skull is somewhere in the UK.

One protester pointed out that demonstrations alone were not enough to bring a change. There must be political and social will from the whites.

“If you look at who tore down the statue, it was predominantly white protesters. They can get away with things that we probably wouldn’t,” he said.

“If you have a majority black protest tearing down a statue like that, I’m not sure what the response is — from the police, let alone the media.”

The behaviour of the police in the West against blacks is revolting to say the least.

Be that as it may, George Floyd has fought bravely from the grave.

This succession of issues affecting black communities has made people more willing to speak out and demonstrate,

“They are now activists because they are fighting for their rights to stay in this country or for their compensation,” said another protester.

“They want to take action because the current democratic process is not working for the people.”

Black people all over the world deserve to be respected and, indeed, treated equally.