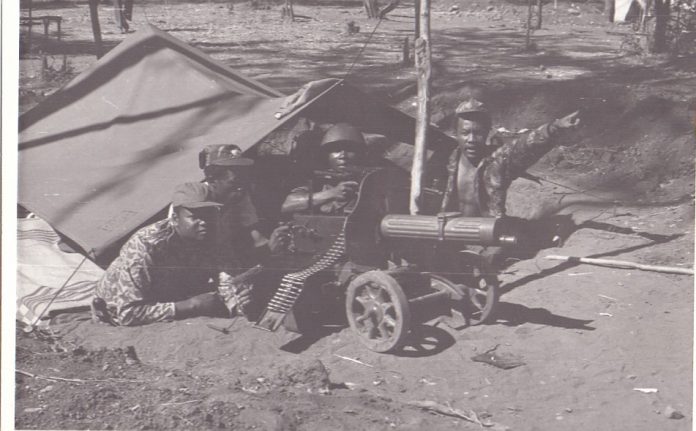 THE delay of food supplies to our Geneva Transit Base in Kavalamanja Village, Zambia, saw numbers at the camp swelling and the growing figure attracted Rhodesians.
The Rhodies attacked us.
The base, which was between mountains, was encircled by Canberras as well as Hawks which unleashed terror from the sky.
We fought tooth and nail to prevent a massacre.
It was exactly 9:15am when a Rhodesian spotter jet swiftly flew past our base at low altitude.
As the commander, I ordered my troops to break through the eastern side of the camp where paratroopers were advancing from.
Heliborne troops were dropped on the northern side of the camp, with the Zambezi River to the south and a mountain range to the west where the Rhodesians had their observation point.
Geneva was a transit base to the warfront in Rhodesia, from Zambia, and a delay in supplies from the Zambian capital, Lusaka, resulted in the congestion of ZIPRA cadres at the boarder base.
Two weeks prior to the attack by the Rhodesians, we exchanged fire with the Rhodies who had made an observation point on a nearby mountain.
We used mortars to drive them off the mountain.
The Rhodesians called for reinforcements and Hawks flew over our base at low altitude to counter our anti-aircraft combatants who were deployed at a base about four kilometres from the main base.
There were 14 of them and the Rhodesians never returned fire but this potented an impending attack. We thoroughly rehearsed and stayed alert for the next two weeks.
I was the regional commander of Feira Region between the Zambian, Mozambican and Rhodesian boarders which launched operations in Msengezi, Hoya, Kachuta, Bakasa, Mushumbi Pools, Mutorashanga, Kazangarare, Centenary, Spolilo, Mvurwi, Raffingora, Shamrock, Doma and Chidodo.
Five troops had crossed into the then Rhodesia from Zambia, but logistics problems had seen numbers at the transit camp growing as fighters could not go to the front without supplies.
Our base was located in a wetland with long grass and this worked to our advantage as it created sufficient cover.
The coming of the lorries with supplies created an open target as the cadres rushed to the logistic point to receive supplies.
It was at that moment that the sky became filled with gunships, Canberras, Hawks and helicopters.
The enemy initiated the attack with bombardment of our camp.
I instructed my troops to fight and create a passage on the eastern side where they fought heliborne troopers and paratroopers in close combat.
A company of Zambian soldiers based about a kilometre from our base fought in solidarity with us.
We had 14 combatants who manned anti-aircraft weapons deployed about three kilometres from our main base.
They managed to gun down one of the helicopters.
A Dakota came flying in my direction at low altitude to avoid the anti-aircraft attacks.
I cocked my AK rifle and relentlessly fired at the Dakota, but it was not effective.
The fire ceased for a moment and I moved from my position to assist my injured combatants.
They were crying for help and as the commander, I could not abandon them.
A Hawk flew in my direction and I took cover in the long grass close to a swamp.
I was shocked to see a red bomb producing some smoke in the water .
As a trained fighter, I knew the bomb would soon explode and I instructed fellow fighters to run and take cover.
I also ran for about 30m and took cover.
The bomb exploded after a few minutes.
I thanked my ancestors because I would have died at that moment.
We were now eight.
I kept shepherding my troops towards some baobab trees.
Unfortunately, by the time we came out of the intensive fire area, there were only two of us left; Cde Siphambaniso Moyo and I.
Cde Moyo lost his rifle in that battle and I gave him my pistol.
We walked towards a stream but soon found some baboons running from behind us towards the direction we were headed.
We took cover when the Rhodies started firing at the baboons.
The Rhodies were laying an ambush to finish off those who had escaped and when they heard the baboons coming towards their killing bag, they mistook them for us.
We crawled for about a kilometre and then climbed a mountain to observe the damage wrought by the Rhodesians.
I will forever live with the pain of seeing the enemy destroy our base and kill my troops.
We were vastly outnumbered.
Zambian villagers of Kavalamanja were not spared in this attack, but we managed to down a Dakota and helicopter and many Rhodesian soldiers during close combat.