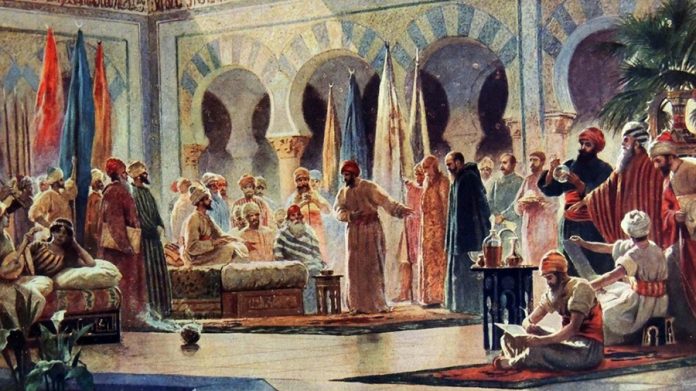 THE relationship between so-called black and light-skinned people has never been harmonious, especially that of the Anglo-Saxons towards the black race.

The reason being envy, fear and jealousy.

Many, I am sure will say that I am totally out of my mind, citing the invincibility of the Anglo-Saxons today.

Their supposedly invincibility today is an illusion and they know it themselves, especially their academics and intellectuals.

They know that they are living on borrowed time, especially if they don’t repent.

The only light the world ever knew was in Africa and the first to try to extinguish it were the Persians in 525 BC; then the Greeks in 322 BC and in 84 BC the Romans finally physically extinguished it, to the detriment of the progress of the white race.

This was in 529 AD, after the edict of Roman Emperor Justinian.

As a consequence, the white world was in total academic and intellectual darkness for over 1000 years. Those who extinguished this light had no knowledge of reigniting it again.

During the white invasions of Africa, the originators of light fled to the deserts and mountain regions, Arabia and Asia Minor, where they reignited the light, which is The Egyptian Mystery System, the black people’s way of life.

In the 8th Century, black people called the Moors invaded Spain and took that light with them. Consequently the whole Europe again benefitted from the light in Spain brought by the Moors, the black people.

After benefitting from this light, the Europeans under the Roman Catholic Church, again ganged against the originators of this light and chased them from Europe.

This happened because of the system of ethics of the originators of the light.

This system encouraged the neophyte (student) to adhere to ten principles, which are:

The above values have created more misery than happiness to the black race because we have been and are dealing with races who have no values at all.

Our downfall as a race starts from ethics seven-to-10, and we have not learnt or are unwilling to learn.

History tells us the Roman Catholic Church was nurtured by black academics and intellectuals from the Egyptian mysteries.

These never forgot and forgave the Roman Empire for crushing their civilisation.

That is why the second Pope, Miltiades a black man led the church to the final victory over the Roman Empire – thus separating the Church from the State as it is today.

This was not received well by many white church academics and intellectuals who were attached to the Empire.

They abided to their time and struck in the 15th Century when a whiteman became a Pope and were in majority and declared that black people had no soul and were fit to be enslaved.

Thus began the downgrading of the black race to its current status quo.

After learning how to ignite the light, the Roman Catholic Church made sure that it executed all black academics and intellectuals wherever they were.

The voyages of discovery, especially in Africa, were really not about preaching the Gospel, but hunting down academics and intellectuals who had dispersed throughout Africa reigniting the light.

These black academics and intellectuals, wherever they went, had started creating thriving kingdoms all over the African continent.

Their downfall was their system of ethics, which is still a problem with black Africans to date.

The Bible they profess to have brought to us, so called pagans, talks about undiluted love 26 times and incidentally, the bible originated from our ancestors, as history is always saying.

Envy, fear, jealousy and hatred ingrained in whites is what they brought to Africa and these have transformed us into a race filled with unbridled hatred towards one another.

It is not their fault but ours.

We conveniently forget that history will always repeat itself.

This is from the Gospel brought to Africa by the same white missionaries, who were on the mission to completely extinguish the remnants of the light (The Egyptian Mystery System) in Africa.

“To him who strikes you on the other cheek, offer the other also; and from him who takes away your outer garment, do not withhold the inner garment either.”

“Give to everyone asking you, and from the one taking your things away, do not ask them back.”

The above verses the white missionaries preached with zeal, fists pumping the air, spittle coming from their mouths and crocodile tears streaming down their cheeks, but they were deafeningly silent about: “Also, just as you want men to do to you, do the same to them, love is patient and kind. Love is not jealous.”

The message of Yahweh to mankind was and is still being corrupted, while those who profess to be servants and love God are burying their heads in the sand.

But there is one thing whites failed and will still fail to do – bury the truth.

The truth has the unpleasantness and propensity of surfacing when least expected.

Time is on the truth’s side.

Where are independent black African churches who are not afraid to preach the true gospel of Yahweh and Yeshua ben Josef?

The statement by Williams, 1987 which says: “The necessary re-education of blacks and a possible solution of racial crises can begin, strangely enough, only when blacks fully realise this central fact in their lives: the whiteman is their bitter enemy,” has been haunting me, ever since I saw it in the book written by Kwame Agyei and Akua Nson Akoto, ReAfrikanization and The Reality Of War, The Sankofa Movement.

That statement is the result of this chapter.

Funny enough many black Africans hate anyone who utters it, whereas whites are actually interested in why it is so.

This unbridled hatred towards us, stems from the way the Roman Empire was crushed by Arabs, with the help of blacks who had converted to Islam in the 6th Century. Africa has always been a cash cow of other races who had conquered her, first the Persians, the Greeks, the Romans and Arabs even though they were helped by blacks, to crush the Roman Empire, and currently, it’s back to square one, back to the descendants of those who enslaved and colonised us.

It’s a vicious and cruel cycle, but the majority of the affected people don’t seem to think so.

World history is an anathema to the so-called modern African.

When a race hates itself to the extent of whitewashing the sins of its tormentors, not even the second coming of Yeshua can free them from mental and spiritual slavery.

The die is cast.

Willingly, we will repeat what our tormentors want to hear from us.

Willingly, we will persecute the truth sayers and seekers.

Willingly, we will accept 30 pieces of silver to be traitors and willingly will we help our tormentors to kill our prophets.

Willingly, we embrace darkness instead of light and willingly, we will be enticed to try to crucify Yeshua a second time, although the scriptures say, it will be a lost cause, but not to you.

I rest my case, and patiently wait to be castigated by my own race, the so-called ‘modern black African’. However, no race has ever outmanoeuvred its appointed time by Yahweh.