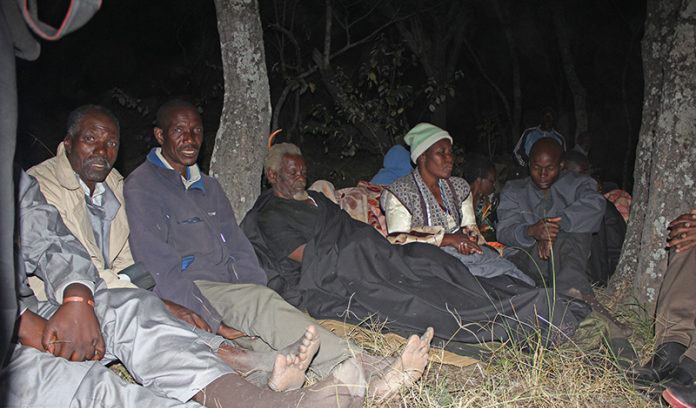 WHEN a race has a defective moral compass, it will always be in servitude to other races.

And the race that is in servitude is actually the lifeline of the very race dominating it.

There is no excuse for any race to have a defective moral compass, even if it is under bondage.

Human beings are made of spirit, which is a life giving force and can never be enslaved.

Body and mind can be manipulated, but the mind has a capacity to set the body free when it reconnects with past memories.

What leads to a defective moral compass?

This is a highly debatable question.

But I see a defective moral compass arising when a race abhors its belief systems and adopts other races’ ideologies or set of principles and beliefs to interpret everyday reality.

Does being in servitude for a long time create a race with a defective moral compass?

The race I am writing about, with a defective moral compass,  is my race, your race, our race, whether you call yourself African, black, ‘nigger’, Nahasi  or Hamite, the foundation being the uniqueness of our skin, nose and woolly hair.

Even though we like to say we are independent, we are indirectly being manipulated by the descendants of the Persians, Greeks and the Romans, 2000 years later.

We are under the burden of their laws (Roman-Dutch) which have relegated our laws to the dust bin of antiquity, under the guise of international laws.

The most disturbing trait about our race, is our willingness to forgive our former tormentors and enslavers, without them even apologising or repenting the heinous crimes they committed against our ancestors.

This we do despite their history of repeated chicanery.

No race is perfect, but our imperfection has been compounded by our race adopting other races’ belief systems while dumping and denigrating ours to our own detriment.

Since time immemorial, our belief systems were the cornerstone of our morality, determining our dominance and success in the political, social and economic arenas.

But without our belief systems, we are like fish out of water and have become the scum of humanity.

We are the only race that rubbishes its ancestors and label them devilish and satanic, to the delight of our enemies.

Our ancestors were more enlightened than us.

The race whose beliefs we have adopted says ‘human rights’ supersede the laws of the Creator.

There is a reason the Creator created the first human being on our motherland.

Some intellectuals say there is nothing special about it, arguing it just happened because of the then prevailing climatic conditions at that time. I beg to differ, because the Creator does not do things randomly.

It has never been trial and error with the Creator, otherwise there could have been turmoil in the universe.

Speculation about things, events, is allowed, that’s why we have free will, but a free will that is not in contact with the Creator leads to defective analysis of spiritual situations and produces a defective moral compass.

If everything the Creator created was good, then it automatically follows that He never created poverty.

Poverty is a creation of man with a morally defective compass: let’s not blame the devil outside us leaving the evil inside us.

Evil blossoms when our free will has broken contact with the Creator.

When that happens, one only thinks of the self and making money by hook or crook while not caring about who gets hurt in the process.

One cannot help but see this phenomena unfolding in some members of our community who are ready to be used by external forces to destroy their own country.

Poverty in our culture was always managed by those fortunate enough to be rich.

The king always called the poor, the blind, his own and were never left to fend for themselves.

I will quote an inscription in one ancient tomb of the ancients, of the Egyptian Middle Kingdom from 2062-1664 BC: “I have given bread to the hungry, and clothed the naked and I was husband to the widow and father to the orphan.”

Maat religion called on the rich to help the less fortunate rather than exploit them.

Compare that to modern religions.

Compare the above to what was happening more than a thousand years later in the Kingdom of Mwenemutapa who ruled from South Africa to Mozambique.

This is what a Portuguese contemporary Antonio Bocarro said in 1499: “The Emperor shows great charity to the blind and maimed,for these are called the King’s poor, and have land and revenues for their subsistence, and when they want to pass through the Kingdom, wherever they come food and drinks are given to them at public costs as long as they remain there, and when they leave that place to go to another, they are provided with what is necessary for their journey and a guide and someone to carry their wallet to the next village.

In every place where they come to, there is the same obligation, under a penalty that those who fail therein shall be punished by the King.”

These are people who had not heard anything about Jesus Christ, aka Yeshua ben Josef, but were doing John 13: Verses 34-35. They had a working moral compass.

One thousand five hundred and fourteen years later, our race has a defective moral compass and has the temerity to call our ancestors pagan, what hogwash!

And sadly, anyone who tries to repair this defective moral compass will be heavily sanctioned and vilified by this race of ours which is good at nothing but  denigrating itself.

Just look at our current scenario.

So much effort to transform our fortunes but so many naysayers and saboteurs.

The religion of our oppressors, which we ardently follow, continues to destroy us.

Yeshua ben Josef talks about self-knowledge in Luke: Chapter 6: Verses 41-46 and I add: Know your history and you will repair your defective moral compass. To salve its conscience, this religion indulges in ‘philanthropy’.

And who is helping them to salve their conscience: it is none other than Africa’s so-called men and women of the cloth.

I quote Ayei Kwei Armah: ‘’Under pressure to embrace destruction calling itself creativity, tyranny, nicknamed democracy and robbery decked as free trade, we were invited to discard such visions of our ancestors as worthless, and to embrace salvation offered by our enslavers. Our shattered universe lies underfoot  as we adjust to rhythms far from the call of connection. In that sense, the voice of Africa, as heard in rituals of connection and remembrance, has long been silenced in our public places.’’

People not initiated in antiquity history will say this is paganism.

The mastermind is asking and reminding us not to forget to connect and remember because by not connecting and remembering, as a race, we will continue to be guided by a defective moral compass.

In an article titled ‘Profiting from poverty’, Regina Jere Malanda states: ‘’It is widely argued that Africa needs Western Investments and that multinational corporations are not the cause of Africa’s problems, but solution. Well, the fact that Africa needs foreign investment cannot be denied. But, over the years, this investment has, by-and-large, not enriched the majority of African people. The UN estimates that unfair trade practices deny poor countries 700 billion dollars every year, and 70 percent of that trade is controlled by multinational corporations.’’

As the British journalist George Monbiot put it : “Debt, unfair terms of trade and poverty are not causes of Africa’s problem but symptoms. The cause is power: the ability of G8 nations and their corporations to run other peoples lives.’’

From the above, our motherland will never have a humane moral compass, since our businesspeople, intellectuals and academics are supping with the very same people with a bankrupt moral compass or, to put it more bluntly, have no morals, no compass at all.

The suffering majority must understand how the ‘beast’ works.

The majority must understand the undiluted scriptures, how religious shepherds misinterpret the holy Scriptures to please our former enslavers.

Chapters and verses that come to mind are the ‘Creation’ stories in both the Holy Bible and the Holy Quran, Genesis 1 and 2 as well as Al Hirj: Verse 26.

To correct or repair our defective moral compass, our people must read extensively all the world’s religious books and compare them with Memphite and Ma’at and so-called pagan values that our ancestors practiced.

As a race, will we be able to repair or correct our defective moral compass and be what we are supposed to be?

Imposed, colonial and enslavers’ religions have failed, and are still failing, to instill in us this natural, noble, working moral compass despite our continent having more churches and mosques than any continent on this planet.

A people with no identity will always have a defective moral compass, and will always be servile to other races despite achieving the education from so-called highly ‘civilised’ countries.

We have been conditioned to despise, hate the self and our race.

That is why Africa is in the intensive care, despite our academics and intellectuals having been honoured in the so-called First World.

How many remember Kwame Nkrumah’s clarion call: ‘’Let’s unite now or perish,’’ in 1963?

He was sold out by his ‘peers’, fellow academics and intellectuals.

What have we, as a race, achieved since that clarion call: to be truthful, absolute chaos and disunity, to the delight of our detractors.

We cannot even speak with one voice.

Nthungo Ya Afrika, aka J.L. Mtembu is a Hamite who strongly believes in the motherland renaissance. For views and comments, email:lovemoremtutuzeli@gmail.com