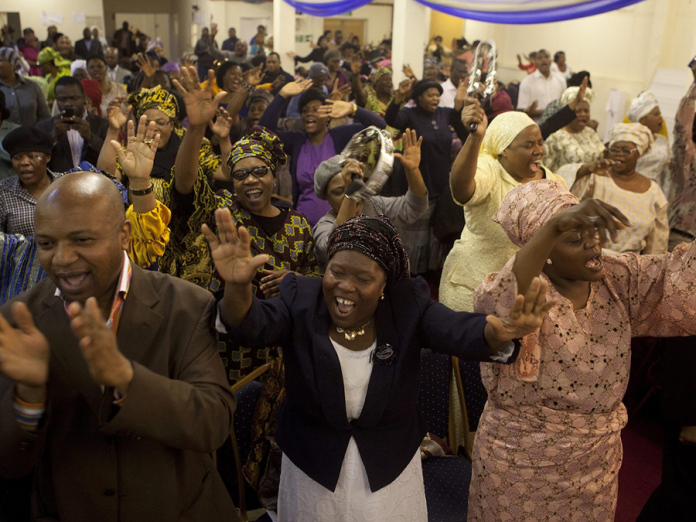 HOW did the whiteman dominate the blackman?

How did he make the black race fear, venerate and deify white people?

He achieved this by cultural, spiritual and physical genocide, which involved killing almost all black academics and intellectuals who refused to work with him.

The number of the killed will never be known but runs into millions, more than the Jews killed by Adolf Hitler.

And the weapon the whiteman used to subjugate and control us is the corrupted Holy Bible.

Initially called The Way of Yahweh, they uncanonized books containing the true Word, calling many written by black and women apostles, those that put the black race in the front, uninspired.

Many people, that is black people, the race that fills up more churches than any other people on the planet, are not privy to how the Bible developed to be what it is today.

The Holy Bible was formulated after the destruction of both Egyptian and Greek religions, by Emperors Theodius and Justian in the 4th and 6th centuries.

Of interest here is that Egyptian and Greek religions were one. This was so because even though the Greeks had conquered Egypt in 322 BC, they embraced Egyptian religion.

When the Greeks were conquered by the Romans in 84 BC,  Rome abolished the Egyptian Mystery System which the Greeks had embraced and from its ashes, encouraged Christianity which they had suppressed before.

And this made Christianity spread faster around the world.

But it was not smooth sailing; there were divisions and discords in the new religion, culminating in many ‘great’ meetings I shall not delve into.

These meetings tried to cement the cracks in the new religion to no avail, splitting the Roman Catholic Church asunder.

From these divisions emerged people with different doctrines from the Roman Catholic Church who formed their own churches.

Among people with ideas that the Catholic Church hated were gnostics.

Gnosticism predates Christianity as its foundation is in the Egyptian Mysteries.

Gnosis is derived from a Greek word which the Greeks copied from the Egyptians.

Gnosis is the knowledge of the ultimate Supreme God and His spirit which is contained in us all.

It is knowledge that allows one to transcend this material world with its falsities and spiritual entrapments.

It is knowledge that enables one to ascend into heaven to be with God, like what Enoch, Elijah and Yeshua did.

Gnostic theology placed salvation in the hands of the individual through personal revelation and  knowledge, excluding the need of the Orthodox Church and the clergy who ‘grant’ ‘salvation’ or ‘absolution’.

This did not go down well with the Church as it lost influence over people.

Gnosticism began to spread rapidly because it was not as conservative as the Roman Catholic Church; there was no distinction between male and female as all beings were treated as equal.

This became a bitter pill for the Church which started hunting and killing Gnostics at the behest of Pope Innocent 111.

A typical example was the extermination of a whole population in Toulose in France of both Gnostics and Catholics.

Very few people know about Gnostic Gospels and I introduced one in The Patriot of August 19-25 of 2022, titled ‘Untold Story Of Mary Magdalene’.

Here is another Gnostic Gospel of Thomas: Verse 22 and it will be compared to Luke 18: Verse 16.

Gospel of Thomas: Verse 22: “Jesus saw the little children who were being suckled. He said to his disciples: ‘These little children who are being suckled are those who enter the Kingdom’. They said to him: ‘Should we become like little children in order to enter the Kingdom of heaven?’ Jesus said to them: ‘When you make the two one, and you make the inside like the outside and outside like the inside, when you make the above as below and make the male and female one (united male and female) so that man will not become musculine (male) and the female not feminine ( female) when you establish an eye in the place of an eye and a hand in the place of a hand and a foot in the place of a foot and likeness (image) in likeness of (image) then you will enter the Kingdom of heaven.”

See how much detail is in the uncanonized and little information in the canonized.

And our race has been bullied into accepting the uncanonized  books as uninspired because the white people say so.

Religion, for good or worse, was created by our black ancestors and not the ancestors of the usurpers.

The corrupted Holy Bible has to revert back to its original name, ‘The Way Of Yahweh’ as preached by Prophet Enoch.

Only our race is capable of doing it but do we have the spiritual stamina and courage to challenge the white people’s ideas?

There will be no peace in the world if The Way Of Yahweh is not preached and followed to the letter and spirit by all and sundry.

Enoch did it when all kings on earth gave him their crowns to rule them and their subjects after observing his way of life towards men and Yahweh.

Those still in doubt please reread Lord Macaulay’s speech, particularly where he says, ‘’…and they will become what we want them, a truly dependent nation.’’  We have been kept in check and have become what they wanted us to become for the past 187 years because of being intimidated by their corrupted Holy Bible.

We have been hypnotised into believing that we are the scum of the earth, a people who are a burden to other races, despite being blessed more than them.

Because of the corrupted Holy Bible, the motherland has nothing to show for all its vast natural resources and unparalleled intellect.

The Sumer Legend is beckoning: ‘’What became of the black people of Sumer, the traveller asked the old man, for ancient records show that the people of Sumer were black. What happened to them? Ah the old man sighed: ‘They lost their past so they died’.’’

If white people are not afraid of Revelation 22: Verse 18 why should we be?

They have given themselves the right to edit and revise The Way of Yahweh, yet it is not their heritage. Action speaks louder than words: they have broken every commandment, even in their corrupted Holy Bible and we still think they are holy and blessed and untouchable.

They start wars, spill blood around the world — slavery, colonialism, murder, plunder rape — and destabilise other races to loot their resources and do not care an iota about judgment day.

What then must we do as a race since our religious leaders are pliant and intimidated by the white corrupted Holy Bible?

The answer is found in Judges 21: Verse 25, which says: ‘’In those days there was no king in Israel. Each one was doing what was right in his own eyes.’’

Are we supposed to feel pity for ourselves? The answer is no.

To those not intimidated by the corrupted Holy Bible, Yahweh is speaking to us through Job 40: Verses 10-14.

It could be another way of dealing with white ideas and champions: ‘’Adorn yourself, please with glory and majesty: Clothe yourself with dignity and splendor. Release the fury of your anger: Look at everyone who is haughty and humble him. And thread down the wicked where he stands. Hide them all in dust. Bind them in the hidden place. Then even I would acknowledge to you. That your right hand can save you.’’

Yes, they corrupted The Way of Yahweh but sign posts are there for us to follow, that is if we are not intimidated by what is said about our race in the corrupted Holy Bible.

The honourable way out for the white race is to repent.

Even the devil asked for forgiveness; this is from the book they hate most that of Enoch, the Ethiopian version, Chapter 13: Verses 1-4: ‘’And Enoch went and said to Azazel (devil) you shall have no peace, a severe sentence has gone forth against you to put you in bonds. And you shall have no toleration or request granted to you, because of the unrighteousness which you have taught, and because of the works of godlessness and unrighteousness and sin which you have shown to men. Then I went and spoke to them all together, and they were all afraid and fear and trembling seized them. And they made me to draw out a petition for them that they might find forgiveness and to read their petition in the presence of the Lord of heaven….’’