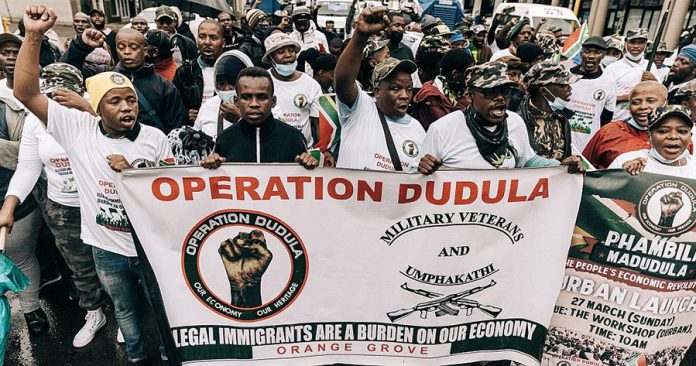 OPERATION DUDULA, in South Africa, is the result of three evils we are willingly entertaining among us; namely Western religion, education and politics.

Western religion is the main foundation of our race’s problem; it starts in the womb.

At birth and while growing up, the child is bombarded with Western education while in adulthood, Western politics takes over, creating a compliant African with no self-knowledge, a genetically modified human being.

Western politics is based on democracy which, incidentally,  is called tyranny by Prof Ayi Kwei Arma.

Operation Dudula is the result of the African Union sleeping on duty.

This is because the AU is invisible and voiceless on the ground and is barely known by the rank and file on the motherland.

This is clearly exposed by academic and intellectual agendas they throw around and are not understood by the common people, who are being affected by Africa failing to unite because of lack of self-knowledge.

If the common people are empowered with self-knowledge, they will then push the politicians to unite, culminating in the motherland becoming one country the way it was before.

This, many people don’t know because our erstwhile enslavers and colonisers don’t want this to be common knowledge.

Common knowledge must be the Berlin Conference of 1884, the partition of Africa.

This is encapsulated in Lord Macaulay’s address to the British Parliament in 1835: “I have travelled across the length and breadth of Africa and I have not seen one person who is a beggar, who is a thief, such wealth I have seen in this country, such high moral values, people of such calibre, that I do not think we would ever conquer this country, unless we break the very backbone of this nation, which is her spiritual and cultural heritage and therefore, I propose that we replace her old and ancient education system, her culture, for if the Africans think that all that is foreign and English is good and greater than their own, they will lose their self-esteem, their native culture and they will become what we want them, a truly dominated nation.”

This was 49 years before the Berlin Conference and clearly shows Tambous’ (whites) motive then, now and until the end of the world.

Can the continent that Lord Macaulay talks about ever have people who would think of Operation Dudula?

Some 523 years ago, in 1499, 336 years before what Lord Macaulay says, the above was the same, this is what Antonio Bacarro, a Portuguese contemporary, says about Mwenemutapa Empire: “The emperor shows great charity to the blind and the maimed, for these are called the kings poor, and  have land and revenues for their subsistence, and when they wish to pass through the kingdom, wherever they come food and drinks are given to them at the public cost as long as they remain there, and when they leave that place to go to another, they are provided with what is  necessary, for their journey and a guide, and someone to carry their wallet to the next village. In every place where they come, there is the same obligation, under penalty that those who fail there in shall be punished by the king.”

Again, the question that begs is: Can such an empire have minds that can think of starting something like Operation Dudula?

The foundation of our race problem is also Western religion as I alluded to above. King Leopold 11 of Belgium’s letter, written in 1883, to colonial missionaries one year before the Berlin Conference in 1884 reads: “Reverends, Fathers and Dear compatriots: The task that is given to you to fulfil is very delicate and requires much tact. You will go certainly to evangelize, but you evangelisation must inspire above all Belgium interests.

You principal objective in our mission in the Congo is neve to teach the niggers to know God, this they know already. They speak and submit to a Mungu, one Nzambi, one Nzakomba, and what else I don’t know. They know to kill, to sleep with someone’s wife, to lie and to insult is bad. Have courage to admit it. You are not going to teach them what they know already.

Your essential role is to facilitate the task of administration and industrials, which means you will go to interpret the gospel in the way it will be the best to protect your interests in that part of the world.

For these things you have to keep watch on disinteresting our savages from the richness that is plenty (in their underground….Your knowledge of the gospel will allow you to find texts ordering and encouraging your followers to love poverty like, ‘Happier are the poor because they will inherit the heaven’ and ‘It’s very difficult for the rich to enter the kingdom of God.’

You have to detach from them and make them disrespect everything which gives courage to affront us. I make reference to their Mystic System and their war fetish, war protection, which they pretend not to want to abandon and you must do everything in your power to make it disappear. Your action will be directed to the young ones for they won’t revolt when the recommendation of the priest is contradictory to their parents teachings.

The children have to learn to obey what the missionary recommends, who is the father of their soul. You must singularly insist of their total submission and obedience, avoid developing the spirit in schools, teach students to read and not to reason.

There dear patriots, are some of the principles that you must apply. Evangelize the niggers so that they stay forever in submission to the white colonialists, so they never revolt against the restraints they are undergoing. Recite every day, ‘Happy are those who are weeping because the kingdom of God is for them’.

This is the foundation of Christian enterprise hovering on the motherland.

This is how we were standard bred to fight one another to defend the white interests, then, now and maybe forever.

Standard bred Africans think our motherland is 54 separate countries and, because of this ignorance which is affecting almost everyone, Operation Dudula is not surprising to the positive spiritually connected.

Many standard bred say the above quoted narratives are an internet conspiracy theory.

Where is our problem as a race?

Prof Ayi Kwei Arma says: “Nothing prevented the 42 nomes (a nome was an administrative division of Ancient Egypt) from forming the Two Lands, then a single State of KMT, able to confront the largest dangers and to thrive in their teeth, through intelligent planning. The ancestors left a message for those too lazy to think: If we are too helpless as Nigerians, Zimbabweans, South Africans, Mozambicans, Senegalese, Mauritanians, Sudanese and Zambians, what prevents us from becoming Africans?… An African identity is not a five-year plan. It is a long-range necessity, requiring sustained, intelligent, determined planning.

That is the work of cultural workers, a kind of intellectuals who can spend 20 to 40 years working on a problem, so systematically that after they die, their colleagues can continue the same work at a high level.”

If the above had been understood by the founding fathers, they would have listened to Kwame Nkrumah’s clarion call of 1963: “Let’s unite now or perish!”

But because they were also victims of standard breeding, they thought Kwame was trying to be their boss.

So it is fitting to label them as the forerunners of Operation Dudula. Ignorance is a voluntary misfortune and it can affect anyone whether educated or not.

Operation Dudula in South Africa is a violent plea to all politicians on the motheland to eradicate hunger, disease, homelessness, ignorance and negatives affecting the common people.

If not checked, it will spiral into tribal wars because if the foreigners leave and the same conditions persist, who will be blamed?

Also, the message from Operation Dudula is quite clear — the rich must stop flaunting their riches in a sea of poverty.

We, as a race, are failing to learn from our rich humane past as alluded to above.

Our ancestors used to call the whites we so admire, savages.

The reason being they had self-knowledge and they knew that they were, as so-called black people, the first to be created (Read Al Hirj: Verse 26, the Glorius Quaraan) and they also knew where the whites originated from (Book of Enoch, Ethiopian version).

If Africans were practising Christianity like in Acts 2: Verse 44-45 which says: “And all that believed were together and had all things in common: and they sold their possessions and goods, and parted them to all, according to their needs.”

This is repeated in Acts 4: Verses 34-37 which says the adopted Western religion, education and politics would be humane and truly revert people to where they belong, the ways of Yahweh, where there is no darkness and Operation Dudula would be unknown. Charity begins at home and Christianity on the motherland is an enterprise and capitalistic endeavour as wanted by Lord Macaulay and King Leopold 11 of Belgium — an enterprise designed to make us lose our self-esteem and culture and a truly dominated people.

The daughters and sons of the motherland fought bitter wars to liberate themselves only to embrace the devil’s doctrines and gospel of self-dehumanision and self-hate.

The truth will never set a standard bred African free, and if the truth fails to set one free, the result is Operation Dudula, the motherland’s virus that will wipe us off this planet as whites gleefully rub their hands together.

This is from the Gospel of Phillip: Verse 105: “Before you possess all knowledge, should you not know yourself, if you do not know yourself how can you enjoy those things you have. Only those who have knowledge of themselves shall enjoy the things they possess.”

This gospel is not part of the corrupted way of Yahweh, now called the Holy Bible, because they say it’s uninspired.

If this is not inspiring, it shows the hold Lord Macaulay and King Leopold 11 have on us as a people.

So we must be surprised by Operation Dudula in South Africa?

Nthungo Ya Afrika, aka J.J. Mtembu is a Hamite who strongly believes in the motherland renaissance. For views and coments, email: lovemoremtutuzeli@gmail.com