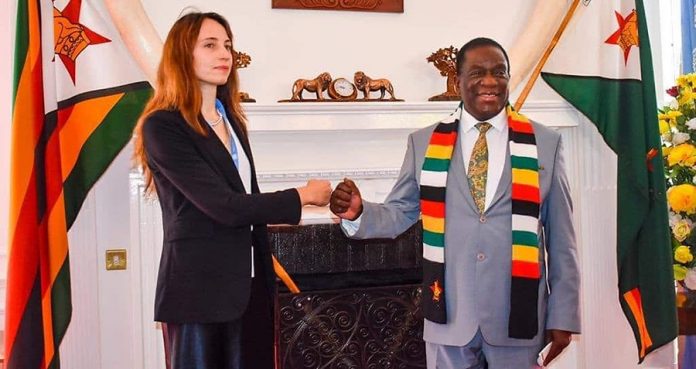 BELOW is an explanation of why Zimbabweans are suing SA domiciled banks for sanctions and why it matters:

Zimbabwe Anti-Sanctions Movement (ZASM) is a civil society organisation consisting of Zimbabwean citizens who have been externally displaced and are suffering under the illegal sanctions imposed on Zimbabwe by the US, the EU, the UK, Australia and Canada.

As an organisation, we believe that sanctions imposed on a nation indiscriminately, disproportionately and unreasonably are illegal collective punishment of civilians.

We believe that such collective punishment of civilians deprives them of their enjoyment of their human rights.

We also believe that sanctions that are targeted upon Government officials for allegations of violating human rights are punishment without trial, as long as those being targeted were never tried in any competent court or tribunal using an established legal code, as enjoined by the Universal Bill of Rights.

Our understanding of the legal problem

The UN resolution 44/215 and UNHRC resolutions 27/21 and 34/13, all confirm that unilateral sanctions (unilateral coercive measures) by States are illegal and contrary to international law and custom.

The same was reiterated by the Special Rapporteur for the negative impact of sanctions on October 28 2021, when her report declared Western sanctions on Zimbabwe illegal, lacking in due process and violating human rights.

In our reading of the established definitions of crimes against humanity and the Geneva Convention, the collective punishment of civilians by indiscriminate, unreasonable and disproportionate punishment by persecution (depriving people of clean water, healthcare, education, development and social services) constitute a war crime in wartime and a crime against humanity by persecution in peace time.

For these reasons, we have decided to use the Special Rapporteur’s report, the Universal Bill of Rights, the South African Constitution and UNHRC resolution 34/13 to take legal action in South African courts against banks domicile in that country for breaking their domestic law and international law by implementing illegal sanctions on Zimbabweans without trial.

We are still intent on also following through with similar action in Zimbabwe, Mauritius, the African court and if the sanctions are not removed by then, we intend to approach the World Court (ICJ).

We believe that the implementation of extraterritorial and illegal sanctions by South African banks and international banks domicile in that country has seen Zimbabweans being discriminated, deprived of banking services and their human rights without trial and without court orders, which is illegal according to the laws of Zimbabwe’s biggest trading partner.

We have heard many banking executives locally, in South Africa and internationally trying to use AMLCT (Anti money laundering and counter-terrorism) rules to justify their illegal compliance to, or implementation of, illegal sanctions.

However, we have noted that just like unilateral sanctions, the application of AMLCT measures is often extrajudicial as no trials or guilty verdicts ever accompany the punishment: discriminatory blocking, prohibiting or excluding of innocent persons, institutions and entities from banking services or the international banking system.

More critically, according to a book written by Juan Zarate who worked for the US Treasury as the assistant director of Counter Terrorism from 2000 to 2008, he led the team of US Treasury and Pentagon experts who devised a strategy of weaponising US sanctions against its enemies by leveraging AMLCT rules to give US sanctions extraterritorial (international) reach through the FATF (Financial Action Taskforce), the establishment of Western- controlled Financial Intelligence Units in every country and the use of SWIFT to block payments.

The objective behind the leveraging of AMLCT rules by the US Treasury was to cut off international financing to nations which fight US oppression, enemies and competitors of the US. This would be achieved by the US and her allies merely labelling their enemies or competitors as threats to democracy, terrorists or risks to the global financial system.

To generate these labels, Western-sponsored NGOs and media write damning reports (like the one that said Iraq had weapons of mass destruction or the one that said Colonel Muammar Gadaffi was murdering civilians) that demonise the targets and then are used by the US President to declare national emergencies that would identify those persons, institutions or nations as threats to the US or global security.

This lawless kangaroo court of fascist, global financiers is the culmination of 21 years of unquestioning compliance to George Bush’s dictatorial slogan of: “Either you are with us (US) or with terrorists.”

With this, SWIFT, which was also created by the G7 like FATF, was also arm-twisted to giving the US government and her allies unfettered access to transaction information pertaining to these entities, so that they can unilaterally block their payment instructions without any court orders from the international courts.

Financial institutions that refused to be part of this Anglo-Saxon dictatorship would be summarily excluded from the global financial system as has happened to the Zimbabwean, Iranian, Venezuelan, Cuban, Syrian, Russian, Libyan and North Korean financial systems.

This process is clearly fraught with illegality as it is an abrogation of international law as well as contravention of human rights law and international customs.

These are illegalities we outlined in a proposal we were asked to write by the Minister of Justice, Legal and Parliamentary Affairs in 2021, to address our warning that FATF intended to blacklist Zimbabwe in its October 2021 review.

In that strategy proposal, we enjoined the Minister to expedite the process of approaching the UN Human Rights Council about the US, the EU and the UK sanctions so that the UN could officially declare the sanctions illegal.

The Zimbabwean Government obliged and subsequently, the UN Special Rapporteur for the negative impact of sanctions came to Zimbabwe in October 2021 and unequivocally declared Zimbabwean sanctions illegal in her preliminary report. Additionally, she dwelt on articulating that illegal sanctions deny nations and businesses legitimate financial channels, which leave them with no option but to use alternative channels that might be perceived as money laundering.

As a result of the UNHRC’s report and other submissions made by our Government, the Zimbabwean financial system escaped blacklisting in 2021 and instead, in the FATF October 2021 review, our case seeks to put the arbitrary system of financial exclusion by the West to the legal test here in Africa (starting with South Africa) and elsewhere, as we seek a restoration of rule of law in international finance and international relations.

What we seek is a declaratory order from the South African courts ordering financial institutions domicile in South Africa (Zimbabwe’s biggest trading partner) to stop punishing people extrajudicially by implementing illegal sanctions or AMLCT rules without due process (trial).

Such an order would empower Zimbabweans to regain their rights in the South African banking system and to illustrate publicly that the imposition and implementation of illegal unilateral sanctions or AMLCT restrictions, without trial or local laws empowering those actions, is illegal persecution.

As a precedence, in 2019, CBZ successfully had penalties levied by OFAC for its over 15 200 infringements of US sanctions, cancelled after they engaged an international legal firm to challenge US for forcing them to implement illegal sanctions.

The result was the US cancelling all the penalties they had levied on CBZ for infringing US sanctions and, till today, CBZ is the only bank in Zimbabwe that continues to open accounts, give loans and process transactions for Zimbabweans and entities on the sanctions list.

The CBZ case is a clear illustration that US sanctions are unenforceable because as they say in Latin: “Ex turpi causa non oritur actio” or the law cannot enforce an illegality. However, to void these sanctions, Zimbabweans must challenge them legally to enjoy their rights as CBZ did.

Just four months ago, a South African company by the name of Sekunjalo also won a case in the Equality Court of South Africa to have all its accounts reopened after Nedbank closed them on the basis of managing reputational risk, after Sekunjalo was negatively implicated in financial impropriety in the Mpathi Commission Inquiry.

These legal precedences have a serious bearing on our legal fight against the arbitrary enforcement of sanctions and AMLCT restrictions without due process (trial) by banks not only in South Africa but in Zimbabwe and internationally.

Once we get a positive ruling in our case, we hope our government and partners can then take this ruling, the final report of the Special Rapporteur which is coming out in September 2022, the CBZ case and the ruling by the South African Equality Court in Sekunjalo vs Nedbank, on international roadshows to show global investors (particularly US investors and companies) that they have been unfairly kept out of the Zimbabwean economy, by illegal sanctions and coercion by the US government and yet it has been proved to be illegal by case law.

This then puts US companies, global companies and investors in the forefront of challenging their illegal exclusion from potential opportunities in not only Zimbabwe but any other country under illegal US sanctions.

More interestingly, there is a powerful political thrust to our case.

With the Special Rapporteur having confirmed that unilateral sanctions are illegal and persecution of civilians it is paramount for Zimbabweans to impress it upon the West that political parties that called for the West to impose illegal sanctions to force ‘democratic change’ or regime change upon Zimbabweans, in pursuit of ZDERA objectives, persecuted civilians through deprivation and collective punishment by sanctions, to force civilians to vote them into Parliament.

By deduction, these MPs used the collective punishment of sanctions to force people to vote them into Parliament, so they perpetuated crimes against humanity by persecution upon Zimbabwean civilians, in contravention of human rights law.

As a consequence, their presence in our Parliament is premised on gross violations of civilian rights and the perpetuation of an international crime that should be tried by a tribunal constituted by the UN or AU.

If the UN agrees to institute such a tribunal, then such a trial is a basis upon which to call for the suspension of these politicians or this political party from the election ballot until the members are cleared of wrongdoing.

As a parallel, in South Africa, a political party that goes by the name of Black Land First was denied participation in the 2019 elections because it was deemed to be discriminating whites from joining the party.

The Zimbabwean Government must also use its own Constitution to discourage the use of voter coercion by illegal persecution for political advancement.

It must be remembered here that, according to the Geneva Convention, the use of economic sanctions upon civilians in wartime to deprive them of food, water, healthcare and necessities is a war crime. Accordingly, it’s a crime against humanity in peace time.

It is arguable, therefore, that our Constitution was created to suit sanctions senders under duress and not to suit Zimbabweans. On this appreciation, we, the citizens of Zimbabwe, can ask for the voiding of the same Constitution that the West keeps insisting that our national laws must be aligned to, because the Constitution is a product of the influence of opposition criminals and coercion of the sanction senders and not the will of the Zimbabwean people.

This is evidenced by the fact that certain elements of that same Constitution, like white farmer compensation, are now being challenged by Zimbabweans today, after we were told that citizens ratified the same Constitution.

Such a position would imply that white farmer compensation could be voidable (on legal review) if the West refuses to remove illegal sanctions and to pay reparations in line with UNHRC RES 34/13 for deaths and economic loss caused by their illegal persecution of civilians.

ZASM’s case is solid and will give the nation the desired result as other ZASM actions have previously done, but it requires relevant stakeholders in this case to play their roles to achieve the outcome.