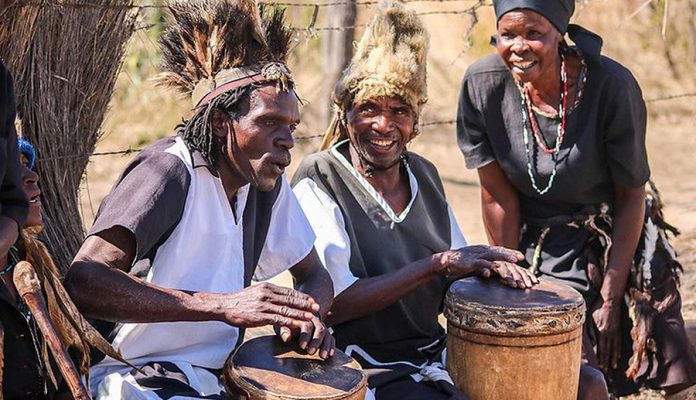 OUR motherland was colonised by Belgium, Britain, France, German, Italy, Portugal and Spain.

Our culture was significantly affected and, linguistically, we were forced to adopt the colonisers’ languages which have divided us since then.

The founding fathers did not embark on the train of cultural unity, but instead embarked on the political unity train.

This train has not yet reached its intended destination of totally uniting us.

Instead, we continue to suffer xenophobia.

If the founding fathers had contacted those gifted with spiritual precognition, our motherland would today be the paradise she was meant to be.

Unfortunately, many of us, having spent some time in, and being educated in, countries that believed our culture was demonic, did not see it prudent to revisit our culture that had been decimated.

The result was a continent that has all the raw materials the world needs and yet is a perennial beggar, seeking help from a resourceless continent like Europe.

This is aptly explained in the Gospel of Phillip: Verse 105: “Before you possess all knowledge, should you not know yourself.

If you do not know yourself, how can you enjoy those things you have.

Only those who have understood themselves shall enjoy the things they have to possess.”

Some of us had all the best educational accolades from the US and Europe and their education made us despise our cultural heritage, resulting in our current dilemma.

Ours is a continent called all sorts of derogatory names, with former US President Donald Trump calling Africa a ‘sh** hole’.

In private, we are called worse names.

We are currently falling prey to our detractors because we entertain the idea of tribal cultures, instead of one unifying continental culture.

The idea of tribal culture was, and still is, being encouraged by those who have empty mineral cupboards in their countries to destabilise our motherland and facilitate easy looting of our natural resources.

The so-called European explorers, criss-crossed the motherland with porters from different areas, without these porters being harassed where-ever they went.

This is because 500 years ago, people knew they were culturally one people despite speaking different languages.

This unifying culture was totemic and it transcended linguistic barriers.

This totemic culture was deemed ‘evil’ by priests in mission churches for they knew it united the people.

In a letter to missionaries in 1883, King Leopold II of Belgium wrote: “You have to detach from them and make them disrespect everything which gives courage to affront us.”

In a nutshell, destroy their culture and make them depend on ours, which made us cultural mulattoes, and this, they have done through their churches (both old and new) which are heavily funded by them.

These churches always interpret the scriptures to the colonialists’ advantage, thereby destabilising the motherland.

With churches sprouting everywhere, professing to spread the Gospel albeit distorted, at the expense of our culture, for their financial benefits, the motherland will end up having more churches than it’s children; like Rome during the classical age; ‘there were more gods than there were citizens’.

Most of these churches discourage their members from practising their culture, calling it ‘evil and demonic’.

Yet those who highjacked the true gospel and preached it to satisfy their selfish agendas were, and still are, more evil and demonic than our culture.

Our culture believed in the creator of everything, of earth and heavens and had different names, depending on the language of the area.

This is what confused many colonialists who thought that these represented many gods, like their situation before converting to Christianity.

That’s why King Leopold II said to Belgium colonial missionaries in 1883: “They speak and submit to a Mungu, one Nzambi, one Nzakomba, and what else I don’t know.”

These are the names of the Creator in different languages.

These men on a mission are described thus in Acts 23: Verse 15: “Woe unto you, Scribes and Pharisees, hypocrites! for you compass sea and land to make one a proselyte; and when he has become so, ye make him two fold subject of hell than yourselves.”

This is what happened during Cheik Ante Diop’s time, in the 1950s, during pan-Africanists conferences.

The intellectuals and academics were divided on religion, pro and anti-colonialism, with some proudly calling themselves cultural mulattoes to please their colonial masters.

Among those from the motherland, Diop was the most hated because his books exposed white scholars as liars as far as African history was concerned.

White scholars all over the world were so upset that they haven’t forgiven him even after his death.

These are some excerpts from Afro-American Conference on Culture in the 1950s.

Alioune Diop said: “If to the non-Europeans mind that the Bandung meeting has been the most important event since the end of the war, I venture to assert that this first World Congress of Blackmen of Culture will be regarded by our people as the second event of the decade.

He warned those attending: ‘’Let us be under no illusion.

We live in an age in which the artists bear witness and are all more or less committed.

We are bound to take sides; every major work by an African writer or artist bears witness against Western racism and imperialism.”

He went on to say: “I should like to know if it was intended to draw up a balance sheet of what has been done in the cultural field and what remains to be done.

If this is so I think up to now we have not really tackled the subject for which we met this evening, and which we should have discussed.

On the second day of the congress, Aime Cesaire delievered an address which nearly tore the congress apart.

He began by pointing out that all cultures have a social, political and economic base and that no culture can continue to survive if it’s political destiny is in the hands of the oppressor.

He concluded by declaring: “Culture is the style of dress, the way of holding your head, the way of walking, the way of tying your tie —it is not only writing books and building houses.”

Although these remarks were considered far to ‘polemic’ for the cultural purist, the response to this question was comparatively mild.

It was the comparison of black status in the US to other colonised blacks that so disturbed the American negro delegation.

The strongest reaction came from John A. Davis, Professor of Political Science at New York University.

Professor Davis, a founding member of the American Society of African Culture (AMSAC), began his rebuttal of Cesaire’s statement by pointing out that, “America has always taken an anti-colonialist position; from George Washington down to Dwight Eseinhower, every President has taken this position.”

What the astute political scientist failed to point out is, it is general practice for colonisers to decry colonisation everywhere except in its colony.

Professor Davis finally got to the crux of his argument by stating: “What American Negroes want—I should make this very clear – and have been fighting very hard for and with great sacrifices, both personal and in terms of blood, is for the complete equal status as citizens; and since 1936 we have been making tremendous progress in this regard.

“We do not look forward to self-determination in the belt if this is what Cesaire had in mind when he said by reference.”

Speaking in a more restrained manner, but possessed of the same anger, was Professor Mercer Cook, a distinguished black linguist and former US Ambassador to Senegal, Gambia and Niger.

One wonders how, especially after hearing Cesaire’s clear explanation of the relationship between politics and culture, could Cook have asked his question.

But he did so, adding: “…and then I asked myself, first of all, what am I doing in this outfit,” especially after hearing Cesaire say, “…that we American negroes have a semi-colonial status.”

Cesaire, at his own risk and peril, addressed the real problems confronting blackmen of culture.

Now he was called upon to respond and, with his characteristic tenacity of purpose and clarity of style, Cesaire responds: “Everyone solves his problems in his own way, with his own convictions, and his own philosophy and that I can well understand.

But in my personal capacity, and with my personal experience, I judged that one cannot, in an assembly formed of African or representatives of colonial peoples, pose the problems of black culture without integrating them into the reality which conditions them, namely the colonial context.”

From the above, one can see that culture, and not politics, can totally unite the motherland.

But like always, some blacks, whether in the Americas, Europe or on the Motherland, are stooges always derailing this freedom train as they front for our detractors and enemies.

Children on the motherland must be taught at a very tender age that their countries have borders not by choice but by the imposition of colonial powers. They are not Zimbabweans, South Africans, Ghanians, Nigerians, Malawians, Tanzanians, Ugandans or Togolese but children of the motherland, whose ancient name is Nahasi and not Africa and must never identify themselves as ‘blacks’ because it is a derogatory term.

Previous generations of academics, intellectuals politicians and religious leaders have failed to push the culture theme and current ones are at sixes and sevens, with a lone voice of the likes of Professor Ayei Kwei Armah not been heeded.

He is a lone voice in the wilderness, like John the Baptist, when he talks about the motherland needing cultural officers.

For the past 67 years, sciences and mathematics and colonial languages, such as English, French and Portuguese, were, and still are, preferred to indigenous languages for one to be called a somebody.

And because of these, the former colonial powers, hold us to ransom, destabilising us at will, because we entertain tribal culture which is a divider not a unifier.

With 3 000 tribes on the motherland, we have 3 000 cultures that are at each other’s throat, benefitting our enemies and detractors.

Currently, continental Africans are outdoing each other by learning the Chinese language, a sign that shows that ‘wannabeism’ is in our blood.

What with our current heritage studies starting with colonial ‘His-Story’, showing our ancestors a step above wild animals and whites all spruced up.

What toddler would like to be identified with such a story?

Is it their fault?

Yes there is —- if museums on the continent exchange notes that override nation States, showing we are one, not 54 States.

This, the late Cheik Anta Diop, tried to do to no avail because of jealousy between academics, intellectuals and politicians then.

The situation is now complex; what with so-called modern churches led by our brothers and sisters now ‘poow poowing’ our culture, thereby further alienating the impressionable youth from their culture.

Can the current crop of academics, intellectuals and politicians put their differences aside and work together to put wheels on the cultural train so that it reaches its intended destination – total unification of the motherland, making her the Queen of the Planet, she once was?