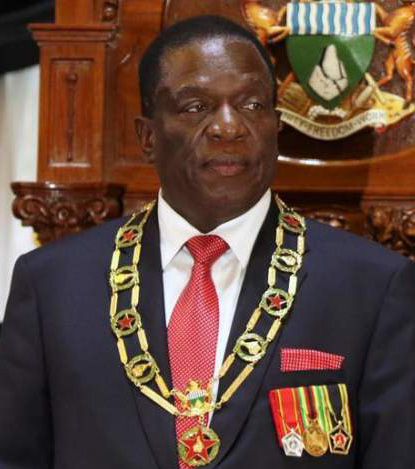 IT has been said and generally agreed, not by us but others, that in Africa, it is very hard to make a real impact in five years.

For low and middle-income countries especially, you need a good 10 years to really make positive change, it has been argued.

A lot is said about Africa, about its countries, that is far from truth and fact.

The Second Republic has been in existence for five years now and positive change has been experienced across the board.

Economic stability, a thriving mining industry, nipping corruption in the bud, a rebounding agricultural sector and infrastructure development have been experienced in the last five years.

What cannot be refuted, even by our rabid critics and enemies, is that President Emmerson Mnangagwa, since 2017 to date, has laid, and is laying, a solid foundation for sustainable development.

After decades of battering by illegal economic sanctions, Zimbabwe was literally in comatose.

No sector of the society was spared.

But the Second Republic has gone into beast-mode to transform the country.

With so many challenges and obstacles along the way, ED has earned respect from all progressive minds.

In the last five years, our way of doing business has greatly transformed.

As the President of Zimbabwe, ED inherited a country, for lack of a better expression, that had become, politically and economically, the Wild West.

We all know the country that President Mnangagwa inherited.

And in the last five years, he has righted the cart, brought under control a vehicle that was headed for the precipice, landed the plane that was nosediving with all engines lost.

He has resuscitated a country that had been pummelled to an inch of its life by a combination of illegal economic sanctions, political intrigue and a Western-sponsored opposition that has been a merchant of violence and brewer of nothing but chaos.

No-one, even opposition politicians and the Western media, in their sober state, can disagree with the fact that ED stopped the freefall of the country.

Whatever that needs to get done to move Zimbabwe forward, ED is doing.

What he has not done is allow himself to be pushed around, especially by the West and if that is a crime, may he continue to commit it.

President Mnangagwa has not minced his words about Africa, about Zimbabwe and what we need to do to move forward.

And that is why he is respected and has received invitations to global forums to present the case of his country and that is also why he is hated by the non-progressive elements.

He has strong views and he has been very honest about Zimbabwean issues.

ED is simply serving his people and remaining true to the country’s ethos.

We all must take a leaf from his book.

Look at the Western countries which comprise Canada, the US and most of Europe, look at how little they have in terms of people and land compared to the rest of the world, yet Africa; the big hearted continent and all of its 54 countries are so focused on mirroring that tiny fraction.

This is a curse we must break free from because it is contributing greatly to the root cause of our problems.

Westernisation is hiding our African innovations and this, ED is breaking by focusing more on homegrown solutions.

ED has promoted, is promoting and not suppressing, the option of coming up with new and authentic ideas to develop the country.

If we continue on this path, we will not be influenced by outsiders — they will only come in to join and partner us but not control.

ED is encouraging Zimbabweans to look within and not beyond, to think of unique ideas to solve our problems and take authority for our progress.

If that is failure, then I do not know what success is.

Let us look deeper within; we have a preexisting knowledge system, the stuff that has already been discovered by our ancestors.

What are we doing about it?

Did Chad not raise Africa’s biggest cattle herd without medicines and vaccines from the West?

That’s sad because all of that knowledge is important to the development of our country and continent.

In the case of Niger, the World Bank spent millions of dollars on a development programme that promised to rid the country of food shortages caused by drought which failed woefully, but in that same country, they were using a traditional method known as ‘sanza’, which is positively flourishing.

Our countries will be better off harnessing our systems for development.

The likes of Muammar Gaddafi, Kwame Nkrumah and a few others were right, no matter how controversial some of their ideas seemed; Africans should believe in themselves rather than beg the world to believe in them.

We need to conceptualise knowledge. We must not adopt but adapt so it fits into our African context. We live in a different context for a reason — Zimbabwe is Zimbabwe and will never be the UK or US.

I can keep quiet, you can keep quiet and go with the flow, but then, you would have become an agent of modern colonisation, which is very  regretful.

We must collectively make the effort to put Zimbabwe on the map, for itself and not for the West to divide and conquer.

The fate of our country is in our hands, what we do with it will determine the future.