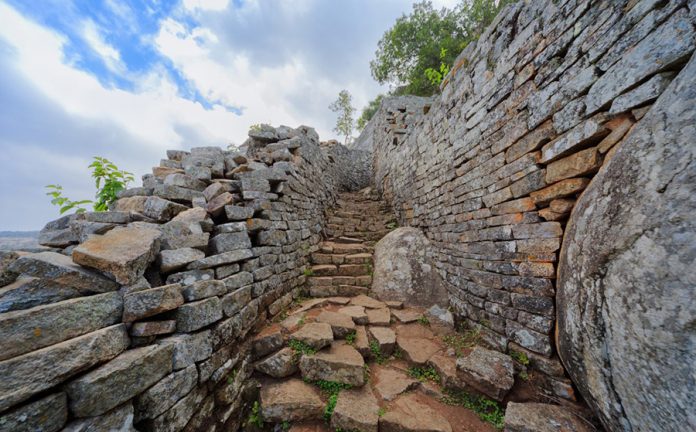 In that article, I said that everything about Great Zimbabwe Temple monument is scientific and not primitive.

The Great Zimbabwe is the most ancient holiest temple on planet earth still in place.

Authors Kwame Agyei and Akua Nson Akoto, in their book ReAfrikanization and the Reality of War, provide a vivid and highly revealing description of the Great Zimbabwe Temple monument.

I was scorned and ridiculed by those who think this was beyond the scope of our ancestors, people who believe His- Story about our forefathers and mothers.

If, as a race, we still believe that our skin pigment is black, despite education from thousands of universities scattered on the continent, then our thoughts about our ancestors and ourselves will always be retrogressive.

This will always be so, as long as we remain benefactors of the three evils we are currently proud of, namely Western religion, education and politics.

Our ancient narratives are always associated with primitiveness.

The ancient narratives not deemed primitive are those from the north, simply because they are near the so-called ‘civilising’ continent, Europe.

Our continent was one country, so primitiveness was not part of us; we were created civilised — the first race to be created. (The Glorius Qua’ran Al Hirj: Verse 26)

The Dogons of Mali’s knowledge of celestial bodies, that confused the white people, was common knowledge on the continent.

Dogons knew about the Sirius star, the brightest star in the sky that can be seen in winter months in the northern hemisphere, that was unknown to the whites.

They knew about its partner and their orbits as well as satellites of Jupiter and rings of Saturn; that the moon was dry and dead like dried blood — all this knowledge without modern scientific equipment.

This knowledge was not the preserve of the north of Nahasi (Africa) only but was common knowledge on the motherland, in all holy temples on the continent, including the Great Zimbabwe Temple.

It is no wonder that our ancestors called the ancestors of the whites, who are currently intimidating us, Tambous (savages), because these white ancestors lacked this knowledge about the universe and their surroundings.

This now brings me to the topic of the day.

How many people know about the extensive astrological knowledge Mwenemutapa Empire had?

This is on top of what the Sankofa Movement authors wrote as alluded elsewhere in this article.

The Mwenemutapa Kingdom was knowledgeable about the planet Venus and this is the knowledge: They knew about the sightings of Venus and her cyclic orbits.

This is what is actually written on a tablet compared to those in the Dresden Codex whose sightings of Venus from earth are 236; in the Ammzaduga Tablet of Babylon are 245; and in the Zimbabwe Tablet whose sightings stand at 251 while the so called actual (scientific) are 263, making Zimbabwe more accurate than Maya and Babylon.

Total cycles of the Planet Venus in Maya Tablet are 584; in the Babylon cycles tablet are 581 while in Mwenemutapa cycles they stand at 583 and actual (scientific) modern cycles are 583,92, also making Zimbabwe more accurate.

This clearly shows that knowledge and writing were unrestricted throughout the motherland although it was as restricted to the priest class as it was sacred.

The Mwenemutapa Kingdom had a writing system called Batua that was different from that of the Tambous’ (white savages), that is why Jao de Barros, a Portuguese, could not understand the writings.

This is how he describes it: “Over the gate of the building is an inscription which neither the Moorish (Swahili) traders who were there, no others learned in inscriptions, could read, nor does anyone know in what character it is written.’’

He further describes the inside of the Palace thus: “The inside consists of a great variety of sumptuos apartments, tapestry, the manufacture of the country. The floors, ceilings, beams and rafters are all either gilt or plated with gold curiously wroth, as are all the chains of the state, tables, benches etc. The candle and branches are made of ivory inlaid with gold, and they hung from the ceilings by chains of the the same metal, or of silver gilt… in short so rich and magnificient is the Palace, that it maybe said vic with that which is distinguishes a monarch of the East.’’

A boer hunter, in the 16th Century, discovered a large quantity of papyrii of Egyptian origin in present day Mozambique, in Tete, which was part of the Mwenemutapa Empire.

Dr Albert Churchward drew attention to these findings: ‘‘In one of the ruins there is a stone chamber, with vast quantity of papyri covered with Egyptian heiroglyphics. The quantity was so large that it was used to light fire with, and yet still a larger quantity remained there until now.’’

The desciption of how our story was deliberately erased is found in Guy Gardner’s narrative: ‘‘There was such a confused jumble of ruined dwellings. Fallen stone work, inextricably mixed with broken pottery and other artifacts that no reliable statigraphy was discernible. Wisely, no attempt at such an analysis was taken when compiling the first volume.’’

This shows that our ancestors kingdoms were destroyed by war, not the current narrative that they were abandoned.

How can someone abadon a palace as described by Jao de Barros above to become a nomad dependent on the vagaries of the weather?

You are not more modern than you think but worse than the word primitive.

If this kind of information was readily available from ECD to university level, self-dehumanisation among us would be a thing of the past. We would be asking why we are the scum of humanity and the answer would be so clear that even a blind person would see it and we would have corrected our mistakes and become priestess, priests, princes, princesses, kings and queens of the world once again.

The Book of Enoch (Ethiopian version) can shed light but unfortunately it is not part of the corrupted Way of Yahweh, now called the Holy Bible.

Now, one can see why our ancestors called whites Tambous, meaning savages.

It was a prophesy that they would turn their descendants into savages as well. We will always be savages as long as we do not acknowledge that Great Zimbabwe is the holiest temple on planet earth — and that’s the truth.

The above narrative about the Great Zimbabwe Temple monument are courtesy of our Nahasi brothers and sisters in the US. This is according to Matthew 7: Verse 7 which most on the motherland are afraid of doing.

These brother and sisters in the US are tired of singing Psalm 137 and want to know the truth about the motherland before they return home.

They know the Savage better than us because they have been intimidated and harrassed by the savage for more than 400 years. We, on the Motherland, view the savage as a saint, what a shame!