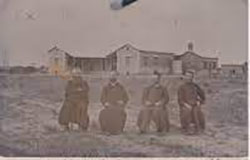 The story of Cde Joachim Tongoona Made AS the liberation war intensified in 1977, with the freedom fighters gaining control over the Rhodesians, our school, Gokomere Mission, was closed in October 1977.

I decided to join the liberation struggle on December 25 1977.

On this fateful day, Auxiliary Forces, who worked hand-in-glove with the Rhodesian army, apprehended me, my friend Gilbert Muteme and my aunt who was mentally challenged.

We were force-marched from our home village, Made, to a Rhodesian military base at Gokomere Mission.

Gokomere Mission was about four kilometers from our homestead.

Gilbert and I were accused of working with vanamukoma while my aunt was accused of sleeping with the freedom fighters.

She was falsely accused because the Auxiliary Forces wanted to sexually abuse her.

While at the base, I was beaten, electrocuted and left half-dead.

I later gained consciousness and could not believe my eyes.

The Auxiliary Forces were taking turns to sexually abuse my mentally challenged aunt.

I was livid but what was I to do.

As if that was not enough, a white Rhodesian soldier forced me to do the unimaginable, but that is a story for another day.

I, however, had to do what I was forced to do in order to save our lives.

I will never forgive Rhodies for this abomination.

We were detained for three days, eating rotten cowpeas, before we were released.

A week after our release, I, together with my fellow collaborators, were sent to Masvovere’s shop to collect clothes and cigarettes.

The shop was about five kilometres from vanamukoma’s base in Sumwa Mountain.

We managed to get to the shop and got our parcel without hindrance.

On our way back, we realised that we were being followed as we reached Bishop’s Dam which was about two kilometres from the Mission.

Auxiliary Forces operated from their home areas, hence we knew them.

We started running towards the base to inform  vanamukoma that we were being followed and fortunately we met Cdes Hilehile, Bruce, Simukai and Soperai.

We informed them that we were being followed by the enemy.

Cde Soperai, who usually operated alone, told us to rush to the base and inform other freedom fighters that they were laying an ambush for the Auxiliary Forces

Since it was November, there was a lot of cover hence it worked to the guerillas’ advantage.

It was around 8am when we heard gunshots just before we arrived at the base and we knew that Auxiliary Forces were under fire.

Five of the Auxiliary Forces perished in that surprise attack while two were captured.

Those who were captured were brought to the base for interrogation before they were ‘bade farewell’.

Vanamukoma then changed base to Chivavarire Mountain, about 10km away.

We knew the Rhodies would come for revenge since it was still in the morning.

Rhodesian forces usually operated during the day and their main strength was the air force.

Indeed, the Rhodesians came for revenge the following day and we saw a huge cloud of smoke rising from our home village of Made.

I was sent to investigate and I met my young sister Elizabeth coming to the base with distressing news.

Our village had been turned to ashes as all our huts had been burnt by Rhodesian soldiers.

What devastated me the most was the callous murder of my mentally challenged aunt.

I was told they locked her in her hut and set it ablaze.

We rushed back to the base and told vanamukoma.

They instructed us to run towards the north as fast as we could while they prepared to engage the enemy.