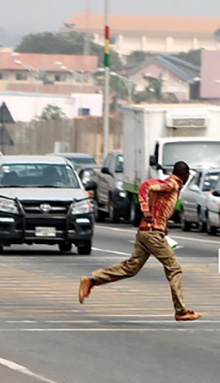 EDITOR —THE Traffic Safety Council of Zimbabwe and other law agencies must also strive to protect a vehicle user from being penalised for the mistakes of the jaywalker.

Last night I saw a drunken man who ran across traffic causing two cars to collide in an attempt to avoid hitting him.

I was reminded of an incident that happened when a female driver was mobbed at the corner of Rotten Row and Jason Moyo here in Harare after a pedestrian suddenly crossed and then stood in the middle of the road as someone shouted a greeting from behind him.

The driver of the vehicle must have assumed that the pedestrian was going to quickly move off the road but instead she hit him, sending him flying and then crashing to the ground. She was  soon mobbed by street kids and onlookers.

The mob was threatening to pull her out of the car and some even opened doors while the driver just sat in the car, dazed and clearly breaking down until a gentleman came to her rescue.

The gentleman then assisted the struck pedestrian into the car and they left.

Incidences like these happen a lot and the driver often takes responsibility both monetary and emotionally; some are even assaulted before anyone gets the full details.

In 2013-2014, the Traffic Safety Council of Zimbabwe promised they would bring in laws to penalise the pedestrian who does not cross the road at designated crossing points.

There were promises by the authorities to make it law but a search online shows that it was an empty promise.

Please this must be addressed, unofira mahara.