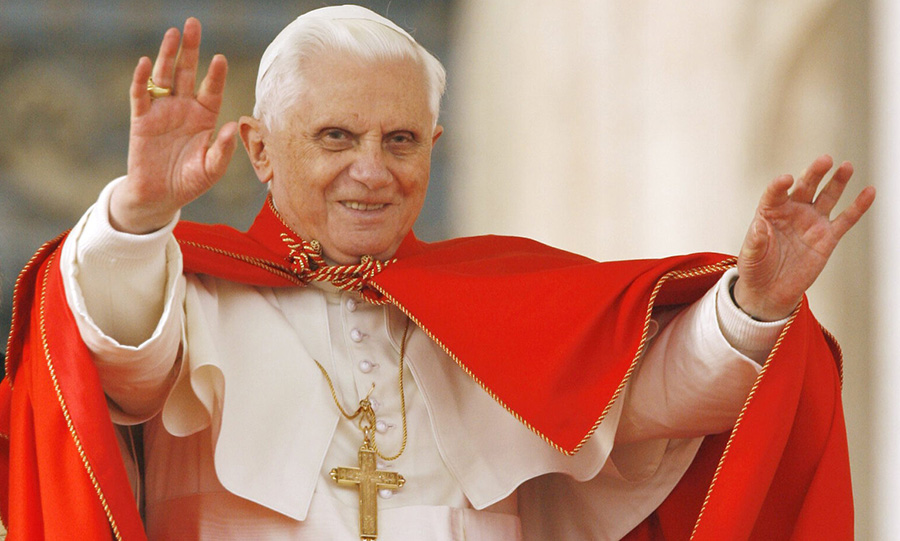 POPE BENEDICT XVI was the first Pope to resign in 600 years in Roman Catholic Church history.

The German Cardinal — whose birth name is Joseph Ratzinger — was elected as pope at the age of 78.

He replaced Pope John Paul II, who died, aged 84, at the Vatican’s Apostolic Palace in 2005 while leading the Catholic Church.

Emeritus Pope Benedict XVI is one of the very, very few Catholic popes in history to step down as leader instead of remaining in the role for life.

Did Pope Benedict XV1 resign or retire voluntarily or was he forced by a hidden hand? — story for another day.

I never thought much about his history-making resignation until I heard about his death at the age of 95 and as I was finishing reading some antiquity books of Egypt and Chaldea.

If he had made history by telling the truth about the power behind the Christian enterprise, which is mistakenly associated with the Son of Man, how it was spread around the world, the world would have been a better place for all humanity.

Commentaries by E.A. Wallis Budge and his contemporaries are quite enlightening. They are not for the standard bred, faint hearted, religious-stubborn African fanatics who see the white race as sinless and pure, sent by Yahweh to save the wretched ‘blacks’, who are in actual fact Yahweh’s favoured race.

To the majority of our race, ‘black’ is not a nickname but the true colour of our pigment, a complete opposite of what their eyes tell them, yet they accept it.

To the standard bred, white people can never be wrong as they view them as messengers of Yahweh, but incidentally their ancestors were, to our forefathers and mothers, uncivilised savages.

Prophet Enoch, in his book and in their Holy Bible in Daniel 7: Verse 25, prophesied them as distorters of human history.

This is what Prophet Enoch says about them in his book, Chapter 104: Verses 9-13: “Be not be godless in your hearts and lie not and alter not the words of the uprightness nor charge with lying the words of the Holy Great One, nor take account of your idols; for all your lying and all your godlessness issue not in righteousness but in great sin. And now I know this mystery that sinners will alter and pervert the words of the righteousness in many ways, and will speak wicked words and lie, and practice great deceits and write books concerning their words. But when they write down truthfully all my words in their languages and do not change or diminish…from my words but write them down truthfully all that I testified concerning them. Then I know another mystery, that books will be given to the righteous and the wise to become a cause of joy and uprightness and much wisdom. And to them shall books be given and shall believe in them and rejoice over them, and then shall all the righteous who have learnt there from all the paths of uprightness be recompensed.”

Did this prophecy come true?

The answer is yes!

They changed the birth day of the Son of Man, changed his name from Yeshua ben Josef to Jesus Christ, made him look white yet he was Egyptian (Nahasi African so-called black) and made the devil ‘black’ yet no one has ever seen the devil.

They broke all the commandments of Yahweh contained in their book which they named the Holy Bible.

The above are a few examples.

The mastermind of these sins was the Roman Catholic Church and, to date, the institution has not repented — its mission of death was, and still is, being embraced by all Tambou churches.

The Roman Catholic Church has, in its vaults, stolen from Egypt,  the largest number of antiquity books about the negative and positive spiritual history of how our ancestors conducted themselves.

They do not want these books to be made public for fear of demystifying the white race superiority complex.

My humble speculation about Pope Benedict the XVI is that he resigned because he was tired of living a Roman Catholic lie and wanted to free his conscience but he was not physically free to say what he felt about the institution.

The words, may his soul rest in peace, to me, are empty as he never lifted a finger to help human beings know the truth.

The truth is that the white race hijacked and corrupted our ancestors’ way of worship, which was a blend of religion and powers that the uncivilised white race viewed as ‘magic’.

Of these two, ‘magic’ had an upper hand that made our ancestors invincible in the eyes of other nations, elevating them to world rulers.

This ‘magic’ was sought after by other nations and eventually they laid their hands on it and, as they say, the rest is history.

Is there evidence to this?

Arab historian Matsudi says Alexander the Great had an Egyptian talisman he used to protect the city of Alexandria when it was being built.

This is so because when the foundation of the city had been laid and when the walls began to rise, certain savage animals came up each night from the sea and threw down everything that had been built during the day, although watchmen were appointed to drive them away.

To thwart this, Alexander and his companions went under the sea in a glass box tied to the ship and saw marine monsters with human bodies but heads of beasts. He then used the Egyptian formulae of drawing these monsters and having them sculptured and placed on pedestals. When these sea monsters came at night to destroy the walls, they saw their replicas and went back never to return.

When the city was now inhabited, the sea monsters made their appearance again and each morning a considerable number of people went missing.

To prevent this, Alexander placed talismen upon the pillars and each pillar was in the shape of an arrow, were eighty cubits in height, resting upon a plinth of brass and were figures and statues of certain beings with suitable inscriptions.They were put in position after careful astronomical calculations had been made for that purpose and produced the effect desired by the King.

According to Matsudi, they were still standing in his day.

This shows that Alexander the Great was no genius military strategist when he conquered the then known world but was helped by our ancestors’ ‘magic’.

Some may wonder who helped him — it was none other than Aristotle who was educated by Egyptian priests before Greece conquered Egypt.

When Alexander died, his generals could not use the ‘magic’ and Greece was subsequently conquered by Rome.

Rome then banned Egyptian Mystery Schools which were the backbone of this ‘magic’.

Their history says these were eventually banned by Emperors Theodius and Justian in the 4th and 6th centuries.

This ‘magic’ was used to conquer the world by Europe.

Compare the size of Europe and the size of the countries she conquered and ask yourself how it was humanly possible?

Egyptian ‘magic’ is well and alive within the white Christian race. What is the Egyptian Pyramid with the eye doing on the dollar note of the US currency?

Our race is under the spell of our ancestors’ ‘magic’ and this spell is being managed by the Christian enterprise which calls itself Christian churches propagating the Gospel of the Son of Man.

This ‘magic’ was taught to our ancestors by the fallen Watchers as highlighted in the Book of Enoch: Chapters 6,7,8,9,10,11 and 12 and the religious priests became the custodians.

With this type of ‘magic’ in their hands, the world will always be at the mercy of the white race.

Read antiquity books and the truth will set you free. (John 8:Verse 32)