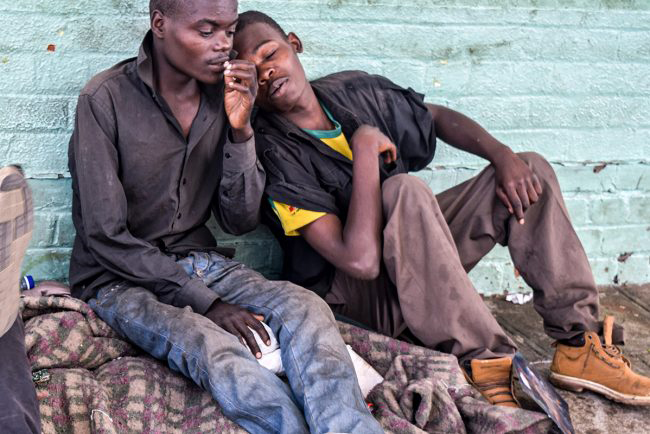 THE quality, quantity, structure, distribution and movement of population can help the rate of economic development of a country.

Young people in Zimbabwe constitute 67,7 percent (35 years and below) of our population.

The Government of Zimbabwe has tried by all means to pave way for basic education to every citizen of Zimbabwe but we are at a high risk of losing the whole generation to drugs.

Substance abuse is commonly known as drug abuse, which is the excessive use of psychoactive drugs such as alcohol, pain medications or illegal drugs in amounts which are harmful to the individual or others.

It is every parent’s wish to see his or her child succeed in life.

The young peers are the leaders of tomorrow but it is heartbreaking that almost half of them are now into narcotics and other addictive drugs.

Schoolchildren are now involved in substance abuse and Zimbabwe health professionals are siezed with problems from the abuse of marijuana but now people are abusing hard drugs, such as heroin, cocaine and crystal meth.

We are breeding a dead generation, a zombie-like generation of young people who cannot work or do something positive due to drug abuse.

Zimbabwe needs its young people to attain Vision 2030, but if the young people cannot even stand up due to high intoxication from heavy drugs, we cannot talk of economic development.

Calls from the Church and community clubs seem not to be effective enough in reducing cases of drug abuse.

Amid having national policies on drug abuse among others, our young people are still locked up in substance use.

To quote from the ‘Zimbabwe National Drug Master Plan‘ document, Zimbabwe has eight legal frameworks which have been put in place towards drug control but still the country is facing the problem of substance abuse.

The same document proposed ‘co-ordinated inter-Ministerial efforts on tackling drug issues’ and ‘comprehensive integration’ which is a positive step taken by Zimbabwe to fight drug abuse.

To take a leaf from other countries on how they deal with drug and substance abuse, Russia securitised the problem of substance abuse in 2002 when President Vladimir Putin declared narcotics ‘a national security threat’.

In 2010, Russia crafted the ‘State Anti-Narcotics Policy Strategy‘ and the document’s main objective was to create a comprehensible approach to rehabilitation and harm reduction on the health of the person, society and the State.

For monitoring and evaluation of anti-drugs policies back in 2002, there was a creation of the Federal Service for control of drugs and psychotropic substances.

Its main responsibility was to enforce Russian anti-drugs legislation.

Russian laws have worked positively in dealing with the drug criminals; for example Article 228 of the Penal Code, with the moniker ‘the people’s article’, whose wrath has had a positive impact for in 2001, drug users in Russia were just 448 100.

In China too, there was securitisation of the drug abuse cases where strict laws were put in place to fight substance abuse.

China has adopted a police-controlled approach to fighting drug abuse — in 2007 the Anti-Drug Law was passed.

The law was enacted for the purpose of preventing and punishing criminal offenses related to drug abuse.

Article 5 of the Anti-Drug Law in China states that: “The State Council shall establish a national anti-drug committee, which shall take charge of organising, co-ordinating and giving guidance to the fight against narcotic drugs nationwide.”

This sounds like the Russia stance of forming a committee which oversees the implementation of these anti-drugs law.

Just focusing on these two countries which have tightened their laws to fight drug abuse, Zimbabwe can take a leaf from them.

As Zimbabwe, we must put in place strict laws and set up a stand-up committee which includes members of our security sector services.

is on the right path but there is need to securitise the problem of drug abuse.

We cannot stand and watch while our youths succumb to mutoriro, bronco and other dangerous substances.

Our police should also re-establish or increase their patrol system of using bicycles during the day and also during the night, in an effort to curb drug abuse by our young people.

The police must resuscitate its Junior Call initiative to act as ‘intelligent officers’ in giving information on drug users in their community and at school.

We should put in place strict laws such as Article 228 and Anti-Drug Law of Russia and China respectively to fight drug abuse.

In our plans to attain Vison 2030, national economic and social development,

We should be guided by the Anti-Drug Law of China, Article 7 which says: “The State encourages public donations for the fight against narcotic drugs and shall in accordance with law, adopt preferential tax policies towards donors.”

Laws must protect us and we should consider using bait tactics in sourcing funds to support the campaign against drug abuse in exchange of privilege tax policies towards donors who help us to put an end to this madness.

For public good, the media, social institutions and different organisations must work together to disseminate and educate people on the dangers of drugs.

The Government should set up more rehabilitation centres where drug addicts receive treatment.

The perpetrators must be taught vocational skills and given work in which all remunerations will be paid to them.

Let us all declare war against drugs and protect our future generations.