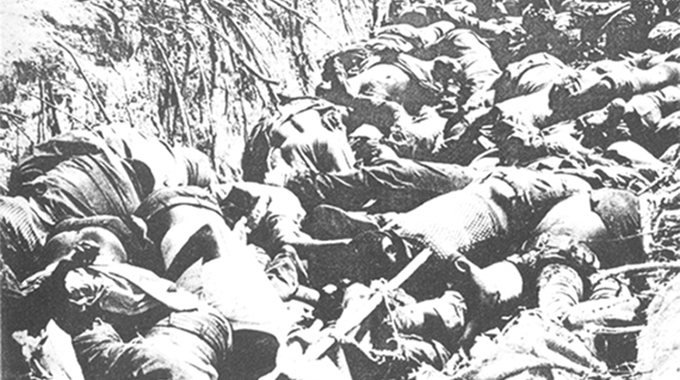 FOR a race to be truly free and independent, it must absolutely be connected to Yahweh, spiritually.

This our ancestors did and that is why they ruled this planet for a record 10 000 years.

This is not impossible because Yahweh said: “I created man in my image.”

The ancestors we are fond of denigrating and despising knew how to connect to Yahweh.

That is why they created Maat, a concept of truth, balance, order, harmony, law, morality and justice, an anathema to the so-called modern African who likes aping the Tambous (white savages).

The political independence we claim to have is no independence at all, because our systems are still tied to the systems of our former enslavers and colonisers, 65 years after the motherland’s first born Ghana got her independence.

Subsequently, the motherland thinks and behaves like our detractors in order to be called ‘civilised’ and modern and to be acceptable to the so-called international community, which is nothing but a community of Tambous.

For elections to be called free and fair on the motherland, they must be observed and endorsed by the so-called international community.

When they hold their elections, no country from the motherland is invited to observe. This scenario, to most people on the motherland, is very normal — normal because the majority on the motherland have been standard-bred, made to think everything Western is superior and cannot be questioned.

Moving away from politics, we come to a minefield, which even Satan is afraid of; that of self-dehumanising religion, introduced by the Christian enterprise that is strangling us physically and spiritually.

This religion has no respect for Yahweh’s precepts and ordinances as its foundations are lies, chicanery, rape, murder and thievery, making Satan a saint by comparison.

Very few will believe what I am saying because of SAVIS (self-acquired voluntary ignorance sydrome), a disease very hard to cure.

SAVIS, I believe, affects 99 percent of our race.

This is so because of the dehumanising systems that the freedom fighters fought to eradicate but have willingly inherited, despite many having paid the ultimate price.

This religion does not want us to know our glorious past but the past of our colonisers, their story.

Our story is deemed Satanic and many among us in this so-called modern times believe it.

This, again, to our race, is normal.

Because of this religion, we sympathise with four million white Jews murdered by Hitler and belittle eight million brothers and sisters murdered by the founders of the Christian enterprise, like King Leopold II of Belgium.

Currently, we are sympathising with white Ukrainians being killed in their war with Russia, but never want to remember those who were killed during the motherland’s liberation wars because the Christian enterprise labelled our ancestors evil and backward people.

Very few among us know that Tasmania, an Island off Australia, was once inhabited by Nahasis (blacks) and were all exterminated to make the island white; no one remembers them anymore.

The Christian enterprise forbids us to remember them and we sheepishly oblige.

When white blood spills, the blacks have to shed tears; remember the statement of the Kenyan envoy in the United Nations shedding tears for whites being killed in Ukraine, but never raised a voice when Libya was being decimated and not a single word on the unjust sanctions against Zimbabwe.

This is normal to a standard-bred African.

I am not surprised by the Kenyan diplomat because after Kenya got independent, there was a declaration that: “…the Mau Mau is a disease which has been eradicated and must never be remembered again.”

The Mau Mau was led by Field Marshall Dedan Kimathi, a legend in the liberation struggle of Kenya.

The Mau Mau was declared a disease because the British had said so.

It seems the Tambous compromised our founding fathers when they were studying in their countries.

Kimathi was hanged in 1957 at the behest of Chief Justice Sir Kenneth O’ Connor.

He was only remembered in 2007 by President Mwai Kibaki on the 50th anniversary of his death.

This ignorance and deference to the West is the motherland’s problems yesteryear, to date and in the foreseeable future if we do not change our history syllabus.

As I was writing this article on March 6 2022, a black Anglican Bishop was lambasting Russia for the war in Ukraine that is killing whites on eTV.

Those in the US changed their name from negroes to African-Americans.

Although they are not Africans anymore, they were brave enough to change the name given to them by their masters to the one they identified with.

Here on the motherland, we still identify with the name black as if it’s from Yahweh, yet this identity denigrates us.

Our ancestors never called themselves black but Nahasis.

Black was associated with the type of the land around the Nile after flooding.

As a race, we don’t want to call ourselves Nahasi because that name was researched by a fellow Nahasi, Cheik Anta Diop?

Had a Tambou researcher discovered our real name and wrote about it, we would easily identify with it. We don’t want to give each other credit, because we are standard-bred to hate each other.

It is not yet uhuru on the motherland.

Because we are afraid to detach ourselves from our former enslavers and colonisers’ systems and religions.

I hope I will be proven wrong, but reading the Book of Prophet Ezekiel: Chapter 17, the Tambous really did their homework.

That is why the Tambous still worship King Leopold II and Lord Macaulay more than they worship, Yeshua ben Yosef, Jesus.

Again, I repeat: Not yet uhuru on the motherland.

The new philosophy of redemption advocated by the late G. M. James, author of Stolen Legacy, must start by us not calling ourselves black because even a blind person can see that our skin is not black.

The origin of us being identified as blacks began with Greeks (322 BC), Romans (84 BC) and Arabs 6th Century.

If we don’t know the colour of our skin, how can we say we are free?

Again I say: Not yet uhuru on the motherland.

A lot of secret information about the motherland is being declassified.

But do we even care about the true story of who we are and where we came from?

As long as most people on the motherland don’t know Maat and think that the Christian Enterprise Religion and capitalism are the best thing to happen to the motherland, our situation is dire.

Not yet uhuru on the motherland!