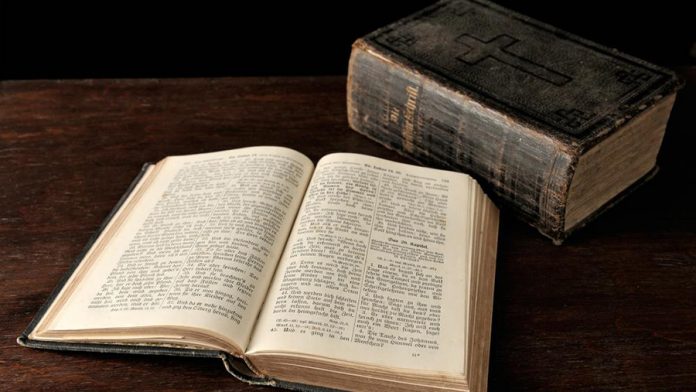 IS there anything crude or primitive about Genesis: Chapter 1, the creation story?

Can any human being understand or explain this verse, if he or she is not connected to Yahweh?

With what is written in Chapter 1, can Yahweh create human beings or animals that are not complete creations but have to evolve over time?

I say no because everything created by Yahweh is good.

There will always be speculations about Genesis 1 and the whole Holy Bible, which was made to be inconsistent by those who translated it, without the help of willing Nahasi (black) Egyptians who had full understanding of the Word of Yahweh.

The most knowledgeable Egyptians with revelation were executed by the Romans when they refused to decode the Word of Yahweh, now called the Holy Bible.

Bible is not Nahasian but Greek. The Word was written in cryptogram and was understood by a few priests with revelation, who preferred death than decipher the Word to be understood and defiled by the Tambous (savages/whites), the name given to all pale-skinned people by our ancestors.

This is what the glorious Qur’an says about the Universe: ‘ The whole Universe and everything therein, has it’s own equilibrium, which keeps it in position..  1:23, 8:55

No two things in the Universe are identical; all have their own identities, determined, distinct, though it may not be easy to detect the difference. 49:54, 8:13.”

If one looks at Yahweh’s creation there is no confusion or incompleteness but order as highlighted by the Psalmist.

Psalm 19: Verses 1-6: “The heavens declare the glory of God;the skies proclaim the work of his hands. Day-after-day they pour forth speech; night-after-night they reveal knowledge. They have no speech, they use no words; no sound is heard from them.

Yet their voice goes out into all the earth, their words to the ends of the world. In the heavens God has pitched a tent for the sun. It is like a bridegroom coming out of his chamber, like a champion rejoicing to run his course. It rises at one end of the heavens and makes its circuit to the other; nothing is deprived of its warmth.”

I direct to these verses to those that say man developed in stages.

The world education system is under bondage and the influence of the so-called ‘Big Four’, namely Charles Darwin, Karl Marx, Sigmund Freud, Friedrich Nietzsche and others currently within our midst.

These and other like-minded proposed, and are imposing, theories that undermine Yahweh’s wholesome creation story.

This is an affront to Yahweh.

Man was created fully civilised because Yahweh is of order not disorder.

Man becomes uncivilised, crude and primitive when man deliberately removes self fom the glory of Yahweh, because of not following Yahweh’s simple Law.

This is simply universal order and justice based on love, the other name for Yahweh.

What prompted me to write this article were questions from a Form Six student researching on the origin and evolving of humankind.

I answered him that my thoughts would not make him pass his exams and explained why.

ln his research notebook, I saw mankind in different stages of ‘development’, that is stone, iron, bronze and cave dwellings.

Our education system is developing youths who will grow into adults who do not know that Yahweh is omnipotent, omnipresent and omniscient, to the detriment of our race.

The philosophy propagated by the likes of Darwin, Marx, Freud and Nietzsche and deemed to be the truth is actually foreign. This began in the 19th Century and we are in the 21st Century and the onslaught on Yahweh continues.

Many do not even believe that Yahweh created the world.

And there are influential intellectuals and academics who want their ‘free thinking’ views to rule supreme.

These ‘free thinkers’ propound that the universe self-created.  Christian churches, although professing to follow the footsteps of Christ, are afraid to challenge them because most of them secretly believe in the philosophy and theology of the free thinkers and the ‘Big Four’.

They read and preach out in passing, Colossians 2: Verses 2, 3, 4 and 8 without explaining the ‘why’ to the congregants:

that their hearts may be comforted, they being knit together in love, and unto all riches of the full assurance of understanding, that they may know the mystery of God, even Christ, in whom all the treasures of wisdom and knowledge are hidden.

No-one must delude you with persuasiveness of speech. Take heed lest there shall be any one that maketh spoil of you through his philosophy and vain deceit, after tradition of men, after the rudiments of the world and not after Christ.

The Quran says exaggeration, wavering and hypocrisy should be avoided.

Despite the above, both of these religions are divided within themselves.

This is because of human philosophies in the religions.

I am sure all the Big Four (Darwin, Marx, Freud and Nietzsche) went to Sunday school and were good Christians when they were young.

I am sure they were shocked to the core when they read the Book Of Enoch, Ethiopian version.

This Book was stolen from Ethiopia by James Bruce in 1783 and was very unpalatable to the white race who thought they were more superior to blacks.

Reading that they themselves were the devil’s incarnate not the blacks, they despised the book that shattered their superiority complex.

They then changed the story of creation to suit their race’s ego, superiority complex and origin.

This was well received by the white Church, academics and intellectuals who, in the 15th Century, had declared that the blackman had no soul.

They then paved the way for the story of evolution to be part and parcel of the education system and drown out the real story of creation.

Blacks who call themselves free thinkers are admitting, consciously or unconsciously, that they are of a lower intellect than whites, even if they might have same qualifications or are better than them.

This is so because they don’t understand why whites embrace free thinking.

In the days of the ‘Big Four’, Genesis: Chapter 1 was under assault, that was in the 19th Century.

The arguments in philosophy, psychology and sociology were that Yahweh was just a figment of imagination in people’s minds, religion was an opium of the masses and that God was dead and there was no admonition from the white Church.

Two hundred years later, the Book of Leviticus is under assault while the white Church is silent on this.

The whole European continent and North America have now legalised same sex marriages, and the Church, this time, has joined this unholy alliance.

Next, incest will be legalised, then human beings will be allowed to marry animals under the banner of human rights.

The white Church being afraid to be labelled out of sync with modern reality by human rights activists, who are anti Yahweh and Yeshua, will bless these unions.

We, as a people, are not independent spiritually and physically and this is the truth.

The pale race, being the major contributors of money in the United Nations will force poor countries to follow their whims of affronting Yahweh.

The poor nations, on their part, will sheepishly accept because they are more afraid of the pale race than Yahweh whom they can not see.

But the source of all trouble in the physical and spiritual realm is dishonesty and mischief; both which are forbidden to true believers.

For a people to flourish, ideas and dreams as well as fears and hopes should be centred in the supreme being.

The affront to Yahweh continues with no end in sight.

The white Church, politicians and their masses are celebrating this affront of Yahweh by His chosen people, the blacks .

The blacks, despite knowing the truth, do not follow it for fear of being denied aid and having their countries destablised.

Some countries on the motherland have already joined this train of affronting Yahweh and are darlings of the whites.

Yeshua’s friends won’t board this devil’s accursed train, but Christians will.

I rest my pen.