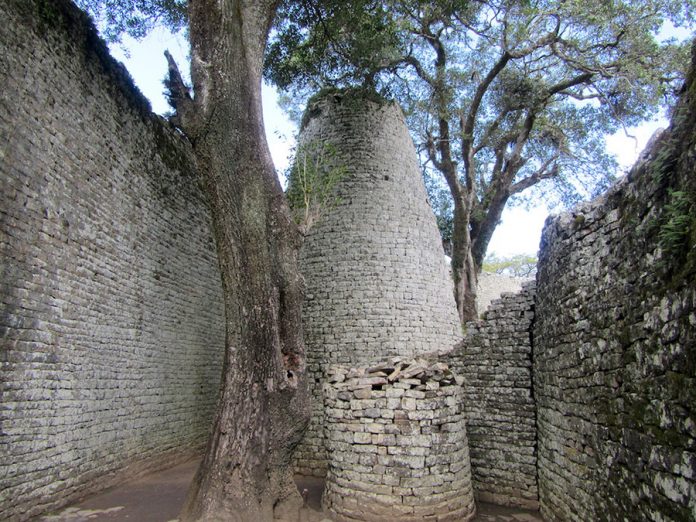 ON August 12 2021, my article titled ‘Great Zimbabwe Monument and ancient spiritual African (Nahasian) science’ was published in The Patriot.

In that article I wrote that some racist whites (Tambous) believe and insist that the Great Zimbabwe was built by Arabs or Chinese or Persians or maybe the Portuguese, but certainly not blacks ( Nahasians) because they ignorantly think that black people were not capable of building such an imposing structure, the best dry stone building on planet earth.

In that article, I included the description of Great Zimbabwe by Agyei and Akua Nson Akoto of The Sankofa Movement which is as follows: “The relationship of the three spheres is analogous to three spheres of the earth; First the earth’s geosphere’ including the core, mantle and the lower crust; Secondly, the biosphere, including the upper crust, the hydrosphere and troposphere and Thirdly, the upper atmosphere, exosphere and magnosphere — the area of the earth’s encounter with celestial forces, including the influence of the moon, sun, comets, asteroids, stars, galaxies and other celestial bodies and forces.’’

The way the Great Zimbabwe Monument is built is called, in modern architecture language, Cyclopean.

The falcon and crocodile that were part of this monument are echoes of Egypt.

Also in that article were descriptions of Egyptian temples by C.H. Vail and Max Mueller from the book Stolen Legacy by G.M.James.

The description by C.H.Vail is thus: “Egyptian temples were surrounded with pillars recording the number of constellations and signs of the Zodiac or cycles of the planets. And each temple was supposed to be a micrososm or a symbol of the Temple of the Universe or of starry vault called temple.’’

According to Mueller: ‘“Egyptian temples were made of stone, the outer courts of mud bricks. Wide roads led to the temples for the convenience of processions, while the immediate entrance was lined with statues, consisting of sphinxes and other animals.

The front wall formed two high tower-like buildings, called pylons, before which stood two granite obelisks. Immediately behind the pylons came a large court where the congregation assembled and watched sacrifices. Immediately next to the hall of congregation came a hall of Priests, and immediately following the hall of Priests came the final chamber, called the Adytum i.e. Holy of Holies Which was entered only by the High Priest. This was the place of the shrine and abode of the God. Each temple was the production of the world (sic).’’

After researching and reading many ancient books of our ancestors, mistranslated by the whites, I realised the so-called abode of the God was the only Holy Place where the High Priest could commune with Yahweh and get positive results. God here is the woman or man possessed by the Sprit of Yahweh.

Who built Great Zimbabwe, the  holy temple and why?

This is from the British history Causes of the Crusades by R. K. Gilkes, C. Emmot and J. B. Dalziel: “In 1071 Jerusalem was captured by the Turks and so started the Crusades after an appeal to Pope Gregory to save pilgrims suffering at the hands of the Turks. This project languished until 1095 when Pope Urban appealed at the Council of Clermont for an international crusade, his aim was to found a Latin state in Palestine to defend Jerusalem. The response was immediate (sic).’’

And so begun the tribulation of the original owners of Jerusalem, the blacks, the true descendants of Ab-ra-Ham, ab (father), ra (exhalted) and Ham (name of the son of Noah).

This was the the beginning of whitening of the Word of Yahweh.

This international crusade was mainly white and they inter-married the local black population in Israel, creating a mixed people, which the Word of Yahweh calls mingled. (Jeremiah 50: Verse 37 and Ezekiel 30: Verse 5)

The true custodians of the temple of Yahweh left for Ethiopia and this quote is from Robin Walker’s When We Ruled.

“In the 12th and 13th centuries, Roha became the new capital of the Ethiopians. Conceived as a New Jerusalem by its founder, Emperor Lalibela (c.1150-1230), it contains 11 churches, carved out of the rock of the mountain by hammer and chisel.”

This is comparable to the rock which the builders of  the holy temple in Zimbabwe incorporated into their building instead of removing it.

Did the custodians of the Holy Temple have peace in Ethiopia?

The answer is no. And further south incorporated into their building instead of removing it.

Did the custodians of the Holy Temple have peace in Ethiopia?

The answer is no. And further south they moved into Soudan only to be troubled again by the Arabs. From Soudan they arrived in present day Zimbabwe and built what I call the most holy temple ever built by human beings, a replica of the temple of the ancestors.

Again did they have peace?

Again the answer is no.

The descendants of the devil followed them with a religion they called Christianity, the opposite of what MAAT stood for.

And what does Christianity stand for — the answer is there for all to see.

The Christian missionary enterprise forced the indigenous populace to sin by advising them to call the High Priests Yahweh, thereby cutting the umbilical cord that connected the indigenes to Yahweh, for this was sacrilege.

They then stopped the indigenous from praying at the temple, saying it was a temple of the devil.

Traitors among the indigenes had told these missionaries where the power of the people lay. This power lay in the temple, when the word of Yahweh was invoked by the High Priest who was called by different names — ‘The High God, The High Spirit, Mlimo and Mwari’, (From ‘The Archives Speak’ by A. S. Chigwedere).

Mwari, as is alluded elsewhere, is not the Creator. Yahweh simply means the Spirit of Yahweh is with him or her or within (Mwaari) that area or space .

How did the missionary enterprise achieve this?

Simple; their first converts were the undesirables of the community who wanted to take revenge on the people who had driven them from society.

And these undesirables were mostly wizards and witches who had built their homesteads in the forest, where they were told to live.

That is the reason, in the Roman-Dutch Law, one is not allowed to call anyone a witch or a wizard, thus encouraging confusion among the conquered.

Yet the Holy Bible says in Exodus 22: Verse 18: ‘’Thou shalt not suffer a sorceress to live.’’

Given this advantage, the witches and wizards used the power invested in them by the Tambous to destroy the motherland.

The modern African Christian Church still calls the Creator, Mwari, here in Zimbabwe, which is sacrilege.

What this means is that we are more ignorant than our ancestors we like to denigrate and despise.

As long as we see the Holy Temple, Great Zimbabwe, as pagan, the motherland will continue to suffer.

The ‘democracy’ being forced down our throats has never removed poverty and homelessness from the motherland.

In the 15th Century, when the Holy Temple was operational, the Tambous found no poverty as all people were the king’s people, looked after by the State — suffering and poverty were anathema.

In the book ‘When We Ruled the World’, Antonio Bocarro, a Portuguese contemporary, is quoted saying: “The Emperor shows great charity to the blind and maimed for these are called the king’s poor and have land and revenues for their sustenance, and when they wish to pass through the kingdoms, wherever they come food and drinks are given to them at the public cost as long as they remain there, and when they leave that place to go to another, they are provided with what is necessary for their journey and a guide and someone to carry  their wallets to the next village. In every place where they come, there is an obligation, under  penalty that those who fail therein shall be punished by the king.’’

This was when the Holy Temple was still operational, infused with the spirit of Mwaari.

Is that Spirit dead?

Let the Tambous go to desecrated Jerusalem and let the descendants of Ab-ra-Ham revive the worship at this holiest place on planet earth, Great Zimbabwe.

Are we brave enough to close all churches of the missionary enterprises and open those that will be directed by Mwari whom I choose to call ‘Mwaari’, who has the Spirit of Yahweh within her or him headquartered in the House of Stones.

From the the House of Stones, the true gospel of Yahweh, which Prophet Enoch preached during his time, will be preached again and the earth will have rest which she urgently deserves.

This is the true gospel that Yeshua ben Yosef, Jesus, tried to preach and was crucified for.

Yeshua ben Yosef’s baton was given to none other than the descendants of Ab-ra-ham — are they up to the task?

Before I rest my pen, what are Hamitic (black) names doing in white blue eyed Ukrainians like current Foreign Minister Dmtroy Kuleba and former Foreign Minister from 2012 to 2014, Leonoid Kozhara.

For the answer, read ‘Let’s make a slave’ by Willie Lynch.

The Tambous’ Crusades and The missionary enterprise were unholy and they got the world in a mess she is currently in.

The true descendants of Ab-ra-Ham must preach and act Maat.

I was amused when I heard the American President Joe Biden, talking about the ‘Free World’, what ‘Free World’, with this unimaginable and unprecedented poverty in a planet of plenty?

The plenty of the planet is in the hands of the very few.