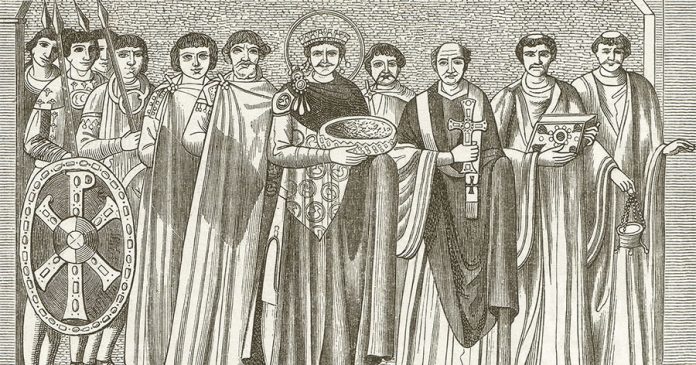 THERE is a gospel of an unheralded Nahasi (black African woman) apostle.

Her name is Mary Magdalene and this is her story.

She came from a town called Magda which is 120 miles north of Jerusalem on the shores of Lake Galilee.

The main business of this town was salted fish.

This town was very prosperous but with a bad reputation of licentiousness.

Mary could have had a business there, for how could she have funded the Gospel of Yeshua.

But just because she came from a shameless city, many thought she was a prostitute.

She is not mentioned as one in the corrupted ‘Way of Yahweh’ which whites call their ‘Holy Bible’.

The contentious ways associated with her are in Luke 7: Verses 37-50 andin John 8: Verses 3-11 King James Version and in John 8: Verses 7-11 are not found in the New World Translation Of the Holy Scriptures of Jehovah’s Witnesses.

In these two Gospels, Chapters and Verses, no name is mentioned, so why do people associate Mary Magdalene with prostitution?

Is it because she came from a licentious town?

From The Lost Books Of The Bible, The Great Rejected Texts by Joseph B. Lumpkin, why are women afraid to vindicate her?

The answer to this is found in the Council of Laodicea, a Christian Synod of about 30 clerics who assembled in about 363-364 AD, which was pagan and is still in control of their Holy Bible.

Now back to our story.

Her Gospel misses pages 1-6 that were containing chapters 1-3 that could not be retrieved.

Of all the canonised Gospels I have read, I have not found any that is better and enriching spiritually and physically than that of Mary.

It clearly shows how they doctored their Holy Bible by not including information that was detrimental to their all Tambou (white) male-dominated Christian enterprise which is currently intimidating the black Africans.

Mary’s Gospel is a reminder of how we, the owners of this planet, black Africans, have been pitted against each other for the advancement of the white male-dominated anti-Yahweh/Yeshua Christian enterprise.

We are always blaming the devil for our problems, yet the root of our problems is self-inflicted.

Such verses in Chapter 4 can be understood by even the dumbest of persons on the planet.

In Verses 30-31, Yeshua said: “The material world produced a great passion (desire or suffering) without equal.

This was contrary to the natural balance.

The entire cosmos (body) was disturbed by it.

That is why I said to you, be encouraged, and if you are discouraged be encouraged when you see different forms nature has taken.”

Some might ask which desire did the material world produce.

There is one that even the devil is afraid of, that is capitalism.

Nature is the backbone of this planet and it is at the mercy of capitalism which is causing climate change.

This is actually recorded in Enoch 7: Verses 5-6, which says: “And they began to sin against birds, and beasts, and fish and to devour one another’s flesh and drink the blood. Then the earth laid accusation to the lawless ones.”

Who then were these lawless ones?

These were children born from black women who had been married to the fallen angels.

Their descendants being the current white race.

No one can deny that the earth is sick because of their technology which depends on plundering the environment.

The question that begs is: Would we be in this situation if this Gospel of Mary was part of their corrupted Holy Bible.

Christian enterprise is always preaching that the world sinned yet the Gospel of Mary disputes that in conjunction with that of Enoch.

The Saviour said, there is no sin (of the world.)

Each person makes his own sin when he makes things like adultery (in the same nature as adultery).

This is called sin.

That is why the Good (Jesus) came to be amongst you.

He came to restore every nature to its basic root.

You become sick and die because you did not have access to (knowledge of) Him who can heal you.

If you have any sense, you must understand this.”

Enoch 98: Verse 94 is a repetition of Verses 25, 26 whichsay: “I have sworn unto you ye sinners, as a mountain has not become a slave; And a hill has not become a handmaid of a woman; Even so sin has not been sent upon the earth: But man of himself has created it; And under a great curse shall they fall who commit it.”

By failing to unite as a continent, we are failing to co-exist, within and without colonial borders.

Some will ask how?

Against this backdrop, this is what Yeshua says in the Gospel of Mary: Chapter 4: Verse 21-24, when asked a question: “And they asked Jesus (Apostles) will matter be destroyed or not?

The Saviour said, ‘All nature, all things formed and all creatures exist in with one another, and they will be dissolved again into their own elements (origins).

This is because the nature of things return to its origin elements.

If you have an ear to hear, listen to this’.”

What then is our original element?

It is the spirit form, where there is no femininity or masculinity, because spirit beings have no physical distinction.

This is how Yeshua answered the ignorant Sadducees (Jewish religious leaders) when asked about whose wife will a woman married by seven brothers belong to, after resurrection? (Mark 12: Verses 18-27)

In their corrupted Holy Bible, a woman is always demeaned, that is because in the whites’ history, a woman was the property of a man.

In their culture, a husband could sell his wife or select an eventual husband in case he died naturally or in battle. Eunuchs (castrated men) were made to watch over their women.

By contrast, in Africa, a woman was well respected until 84 BC, when Rome conquered the motherland.

Rome, with her religion Catholicism Christian enterprise, destroyed the freedom women enjoyed on the motherland then and up to date.(Cultural Unity Of Black Africa Cheik Anta Diop)

The sin of men on the motherland, which has labelled us ‘scum of humanity’, is because we see and treat womenfolk like chattels.

This was imposed on us by the whites when they ‘conquered’ us and these were their pagan religious beliefs, which the modern African men now think it’s our ancestors’ culture and 2 106 years later, there is no relief for our women folk.

The Gospel of Mary was a thorn in the flesh for the first Christian Church and still is today because of whites’ pagan beliefs of women in the so-called modern Church. That is why it is still rejected and not canonised nor part of their corrupted Holy Bible.

To the white men, then and now, a woman must not lead a Church and this is so clear in the Roman Catholic Church, where in the Church leadership, there is no woman.

Black men have foolishly copied this anomaly to the detriment of our race.

Because of this, the Gospel of Thomas, another rejected text by the modern Church says: “Those who recognise themselves will find the Kingdom of Yahweh, and when you come to know yourselves you will realise that you are the children of the Living Father.

Yet if you do not come to know yourselves then you will dwell in poverty and it will be you who are the poverty.” Without Mary Magdalene, true Christianity would have died a still birth.

That is why Yeshua trusted her.

Even when she was with other Apostles after Yeshua had departed, she was despised by male Apostles.

In Chapter 5 of her Gospel, Peter said to her: “Sister we know that the Saviour loved you more than all other women.

Tell us the words of the Saviour that you remember and know, but we have not heard and do not know.”

She then told them, and all those present were perplexed as they could not understand a thing.

This then prompted Andrew in Chapter 9 to say to other believers: “Say what you want about what she has said, but I do not believe that the Saviour said this.

These teachings are very strange ideas.”

Peter then questions them about the Saviour and asked: “Did He really speak privately with a woman and not openly to us?

Are we to turn around and listen to her?

Did He prefer her to us?”

Then Mary sobbed and said to Peter: “My brother Peter, what do you think?

Do you think that I have made all this to myself?

Do you think I am lying about the Saviour?”

Levi said to Peter: “Peter you have always had a hot temper.

Now I see you fighting against this woman as if she is your enemy.

If the Saviour made her worthy, who are you to reject her?

What do you think you are doing?

Surely the Saviour knows her well.

That is why He loved her more than us.

Let us be ashamed of this and let us put on the perfect Man.

Let us separate from each other as He commanded us to do, so we can preach the gospel, not laying down any other rule or law beyond what the Saviour told us.”

And when they heard this, they began to go out and proclaim and preach.

The attitudes of Andrew and Peter are not surprising, for the womenfolk at that time had been under suppression for almost 117 years as from 84 BC.

Pagan beliefs were even within the 12 anointed and revered Apostles.

Before the outburst above, this is what Chapter 4: Verse 39 says: “When He (Jesus) said this He departed.”

Chapter 5: Verses 1-4 says this about the situation when Yeshua departed: “Then they were troubled and wept out loud, saying, how shall we go out to the Gentiles and preach the gospel of the Kingdom of the Son of Man?

If they did not spare Him; how can we expect that they will spare us.

Then Mary stood up, greeted them all, and said to the fellow believers, do not weep and do not be troubled and do not waver, because His grace will be with you completely and it will protect you.

Instead let us praise His greatness, because He has prepared us and made us into mature (finished or complete) people.”

Mary’s words turned their hearts to the good, and they began to discuss the words of the Saviour.

I hope she never died but translated like Enoch, Elijah and Yeshua.

If Yeshua quoted from Enoch, what stops us from quoting from it?

Black Africans worldwide must wake up from this spiritual slumber as no peace, prosperity and respect will our race enjoy collectively as long as we treat our women folk like chattels, a culture from the descendants of the fallen Angels whom our ancestors called Tambous, meaning ‘savages’.

Mary Magdalene, an acclaimed black African woman Apostle will soon be heralded as no one can suppress the truth.

If we fail to acknowledge the truth, poverty will always be our second name and we will always be a race that copies and pastes instead of being inventors and innovators.