Home Opinion When a race’s mind, soul and spirit are captured…the truth is called... 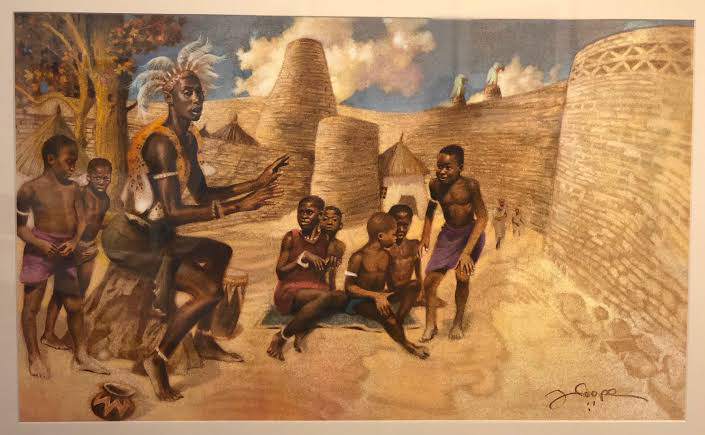 THE Nahasi (Africans or blacks) believe everything the Tambou (whites) say about their past, present and future.

There are some among us who believe our ancestors were pagans.

The Tambou’s meaning of pagan is a person or race that does not belong to one of the world’s mainstream religions.

Human beings’ religions were started and crafted by our ancestors, for good or worse, so how can they be pagan?

A pagan is one who does not know the self and by not knowing the self, one does not appreciate Yahweh — most Africans or blacks born after 1884 are such people.

They have been captured; the truth is lies to them and will never set them free.

What the Book by J.A. Rogers, World’s Great Men Of Color, says about the Nahasi, most blacks or Africans will label it outright lies.

They point out that if we were great, why are we the doormat and scum of the world today.

From 1884 to date, we have been standard bred to hate ourselves and our ancestors.

We love to be divided physically and spiritually, for personal benefits, unconcerned about the consequences that emanate when people are divided.

Asking why we allow ourselves to be divided, one gets the answer: ‘It’s a free world with everyone blessed with a free will.

If my free will leads to my own destruction, so be it’.

But in most cases, one’s free will, not considered carefully, has caused a lot of harm and suffering to the unsuspecting around that person.

You are no different from a suicide bomber who detonates a bomb in the public square.

Not many people know that India became prosperous, because of the blacks who ruled it, before the arrival of the white races.

Ethopians first appeared in India in 1300, when they seized the Island fort of Janjira, the site of Bombay.

They first came as traders but when this became unprofitable, they engaged themselves as soldiers and mercenaries in the armies of Brahmans.

They brought 10 000 of their women and slaves to settle there and became the source of central power.

Ethiopian industry, skill and statemanship helped greatly in making India the rich and prosperous country which the Portuguese, English and the French later ‘found’.

They settled in Bombay, Gujuat and the Deccan to the west and Bengal to the east.

The most distinguished negro ruler was Malik Ambar, who was a slave.

He became the commander in chief of the armies of the Bombay Empire.

When Queen Chand Bibi was slain by rebels in her palace in July 1600, he remained loyal to the ruling dynasty.

He captured the rebels’ stronghold Ahmadnagar.

Then proceeded to Aurangabad, a city he built.

He then proclaimed Mustaza 2, grandson of Nizam Shah, ruler, with him being a regent. Seven years later, he deposed the king and seized the throne.

His vast kingdom was in the Deccan to the east of Bombay.

His overlord was Jahangir, the great Mongul Emperor. They were always fighting each other, with Jahangir insulting Malik Ambar, calling him ‘the black-faced wretch’.’

He captured the city where he started as a slave, called Bijarpur and forced it to pay tribute to him.

Golonda, a city whose name was synonymous all over the world with wealth, he captured and also forced it to pay tribute to him.

When the English first came to India in 1628, Malik Ambar was their first contact.

He was the master of the Island of Janjira, which the English, like the Ethiopians of three centuries before, wanted as a base for commerce with the interior.

They tried to bribe him but when that failed they wanted to oust him, but it also came to naught.

In a decisive battle in 1628, Malik Ambar, armed with rockets, cannon and armed elephants defeated Abdullah, an ally of Jahangir and it seemed that was the end of Jahangir.

But unfortunately Malik Ambar died thereafter at the age of 80.

Motamid Khan, an Indian historian, says of Malik Ambar: “This Ambar was a slave, but an able man. In warfare, in command, in sound judgment, in administration, he had no rival or equal. He well understood that predatory warfare which in the language of the Deccan, is called bargi-giru. He kept down the turbulent tribes and maintained his exalted position to the end of his life and closed his career in honor. History records no other instance of an Abyssianian (Sidis) slave of such eminence.’’

Another Mohammedan historian by the name Ferishta says of him: “Such is the esteem in which his character is held that notwithstanding the lands dedicated to the support of the attendant of his tomb, are yet left incorporated for that purpose, He was the first general, politician and financier of his age and his country was the best cultivated and his subjects the happiest of any in Deccan.

He founded Ghurken, now called Aurungabad and ornamented it with a magnificent palace, gardens and noble bodies of water, lined with stones which still remain. His charities and his justice are yet celebrated and he was also eminent for pieties.’’

Nawaz Khan, an Arab historian, says similarly: “In military acts and in statesmanship and right judgment, Malik Ambar was unique.”

A poet of these times compared him with Bilal, another negro who was Mohammed’s companion and inspiration. He said: “There was Bilal, the servant of the Apostle of God; After 1 000 years, there came Malik Ambar.”

There was also Malik Andeel, a benevolent Sultan of Bengal India, who was born a slave.

He became commander in chief of the armies of the rich and potent kingdom of Bengal under the rule of Futteh Khan and eventually became Sultan himself.

He was possibly the greatest of Ethiopians who obtained power in Eastern India, elected sultan by the people of Bengal with the official title of Feroze Shah.

He was an able ruler.

His Ethiopian compatriots backed him so efficiently that none of the white Turkish and Afghan races dared to rebel against him.

He was noted for his generosity.

On one occasion, he ordered that a sum of money be distributed among the poor, which his Ministers thought to be far too much.

To impress this upon him they heaped up the money in a room through which the Sultan was bound to pass.

Learning of the intent Malik Andeel said when he saw it: ‘’Is that all? Double it.’’

He was succeeded by his son Mahmud.

The remains of a mosque, a minaret and a resevoir built by Malik Andeel were still in evidence in 1813, according to Stewart who commented that Malik Andeel governed with strict justice and munificent liberality.

From above under the formative years of Mohammedan rule, slavery was not a barrier to an ambitious slave.

Among other black people who were distinguished in this region of India were Mawla, who was thrown under the feet of an elephant by Sultan Jalalu-Din because the people wanted him to be sultan.

When the Mohamedan rule was at the height of its splendour in India, there was a considerable influx of Ethiopians coming as traders, with the majority as mercenaries and slaves. They then emerged from the masses to become prime ministers, great military and naval commanders, hereditary admirals and Sultans.

From the above, it shows that most of the Ethiopians who ended up in eminent positions in India were ex-priests, who had been enslaved.

Only priests were trained to be leaders and rulers.

All those mentioned above had these qualities and qualifications that are only found in those who had gone through rigorous training in priesthood.

Did the late Mahatma Ghandi know of this history?

How many in India, who look down on their dark counterparts, know of this history?

Will India ever teach this history, which shows that without the blacks, India would not be where she is today.

How many in the West know this history?

Will they be brave enough to teach it in their schools?

This history shows that we are the people who gave light to the world.

It would be interesting to know if China and Japan benefitted from the blacks (our ancestors) because China borders India while Japan is opposite China.

All these questions would have been answered if our ethnologists were fully funded by black billionaires and our universities were independent.

Being who we are, the generations after 1884, the answer will not be forthcoming, as many will say, does it matter.

Future generations of our race will continue to be trampled by other races because we do not know our story but appreciate His-Story, of the former ‘master’.

In their minds, this: ‘Does it matter generations’, see no substance in their story because they say it’s a non-event to our current situation.