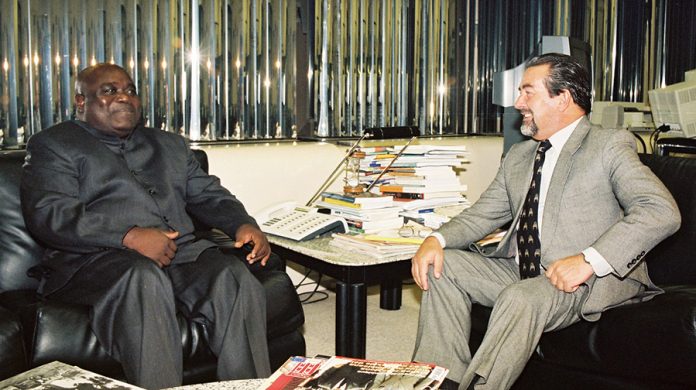 FOR those who say Zimbabwe joined the second Congolese war for looting and personal interests of its leaders, here are a few facts to debunk this Western narrative.

Firstly, Zimbabwe joined the second Congolese war as a SADC mandate that was informed by the SADC mutual defence philosophy emanating from the Frontline States Alliance of 1992, the resolutions of the Southern African Development Coordination Conference of 1995 and SADC Organ on Troika (Organ of Politics, Defence and Security) resolutions of 1996.

At this juncture, it’s important to note that this war has now gone down in history as the biggest war in terms of casualties since the Second World War, hence it’s known as Africa’s World War, in which over six million people perished and more than seven nations were involved.

When the DRC was assaulted by foreign Rwandan and Ugandan-backed rebels (Rally for Congolese Democracy, Banyamulenge and others) from the north and east, Laurent Kabila appealed to Cuba and SADC for military assistance as the rebels made quick progress toward Kinshasa to overthrow him and install Rwandan and Ugandan proxies as the new governors.

In response an emergency SADC meeting was held in Zimbabwe in August of 1998 and three nations: Zimbabwe, Angola and Namibia emerged to honour their Organ defence resolution obligations. They were joined by three northern regional block countries (Libya, Sudan and Chad). Ironically, the majority of SADC countries curiously chose to remain neutral in the conflict.

Why did Zimbabwe go to the DRC?

Zimbabwe’s decision was reached to honour the ideals of African unity that were enshrined in the preamble of the OAU founding philosophy which were to defend African people and liberate the continent from colonialism and neo-colonialism.

The decision also illustrated Zimbabwe’s commitment (in deed) to the principle of maintaining the spirit of regional and African solidarity (with the Congolese people) that saw it and countries like South Africa, Angola and Namibia benefit from the support of Frontline States like Zambia, Tanzania and Mozambique during the struggles for liberation.

Strategically, these three SADC States were also against the trends witnessed in West Africa, where that bloc has failed to maintain co-operative regional stability in fighting civil unrest, coups and terrorism in that region to a point where interregnums have opened up for Franceand AFRICOM to have military presence and political influence in the region.

Why did other SADC nations not participate?

As to the reasons some SADC countries did not participate in defending the DRC in line with the principles of the Frontline States Alliance, African solidarity and SADC Organ mutual defence resolutions, assumptions have been made that a few of those who sat it out, like Zambia and Mozambique, chose not to take part because they had played a big enough role in assisting other SADC countries achieve independence. This is why, on this occasion, they passed the baton onto these countries that they helped liberate to pay it forward on their behalf.

However, questions remain around the non-participation of a regional power like South Africa, which was liberated by border wars fought by other SADC States, resulting in the loss of over 600 000 SADC lives at a cost of over US$120 billion.

Various speculative conclusions have been made.

Some cite a lack of commitment to regional co-operation by South Africa and Botswana because their Western handlers wanted Laurent Kabila to be removed so that a puppet leader, partial to Western and white South African corporate interests, would replace him.

There is also the notion that the West had asked South Africa not to interfere because, besides removing Kabila, they wanted the DRC to descend into turmoil that would push through the UN proposal to divide the DRC into five separate States controlled by Tutsi leaders, in pursuit of establishing Museveni and Kagame’s Hima Tutsi Empire in the Great Lakes.

The jury is still out on the truth surrounding the reasons these nations never participated. However, what we know is that the Zimbabwean-led SADC intervention in the DRC resulted in Rwandan and Ugandan backed rebels failing to overthrow Kabila. The DRC remained as one nation and the war did not spread throughout the region after the warring parties were pushed into peace negotiations in Sun City, South Africa.

The path to peace all began with the July 10 1999 ceasefire agreement (Lusaka Protocol) reached in Lusaka, Zambia.

However, hostilities continued for a while and culminated in Rwandan-backed RCD factions breaking into two and one falling into Ugandan control as they jostled for exclusive power sharing negotiation rights and control of the eastern DRC.

As Rwandan and Ugandan RCD were killing each other for position, Laurent Kabila was assassinated on January 21 2001 by his Tutsi bodyguard and replaced by his son Joseph Kabila, the son of a Tutsi woman.

A month later, US unilateral sanctions were imposed on Zimbabwe by the US Congress because the Zimbabwean Government had accepted Kabila’s call for assistance and for fast tracking land expropriation from white farmers back home.

That same year, South African Defence Forces began their UN peacekeeping mission in the DRC after the signing of the Declaration of Fundamental Principles in Lusaka by the warring factions on May 4 2001. The Gaborone Act of Commitment, in August 2001, would follow, leading to the Sun City talks and the accord being signed in 2002. It was ratified in 2003 to bring peace to the DRC.

We cannot have unity in Africa without the citizens of Africa understanding their geo-political history and neo-colonial reality.

We also cannot have African progress without unity, solidarity and common contribution to causes like mutual defence and economic collaboration.

That’s why it’s important for Zimbabweans in particular to understand that the participation of their army in the DRC was critical in building regional stability and continental unity by stopping the balkanization (breaking up) of the DRC for Western interests.

Because the DRC was not fragmented, it remains a functional country today and Africa did not descend into war. Our Government’s reasons for going to the DRC were bona fide, sound as well as crucial for continental peace and our national security.