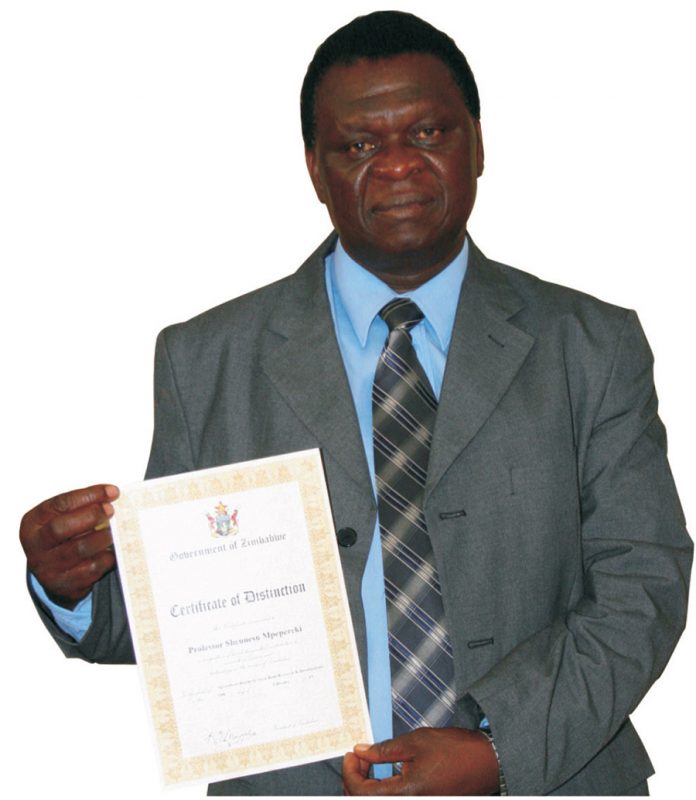 A boy who grew up into a young man full of curiosity and thirsted for knowledge, pursued it all his life and practically utilised it.

A professor he became.

And he was no ordinary professor.

He was not only knowledgeable in his field of agriculture and soil science, but literally in all areas of life, social, economic and political, especially pertaining to his country Zimbabwe.

He loved his country.

He never pursued knowledge for the sake of it.

He saw it as a tool to help his country and people to have a better life.

The good professor abhorred those whose desire for a higher degree was not matched by greater work output and considered their qualification for entitlement to higher level benefits with minimal contribution to productivity on the ground.

Many a time he would ask me: “Evans what good comes from an agricultural Phd when the holder does not know how to change a flat tyre on a tractor or does not even have a vegetable garden in his or her backyard?

“It is for the ‘educated elites’ to lead by example, to ‘dirty’ their hands in order to generate goods and services.

“Many civil service departments have hierarchies of elites who become less productive as they acquire more ‘educational diplomas’.

“This scenario defeats the whole purpose of education which aims to increase productivity.

Ways must be found to ensure that the higher level skills impact the end-users’ needs — the farmers in the case of agriculture.

“The training regimes at schools and colleges must inculcate in trainees a strong practical work ethic.

“Teachers must teach by example.

“We need a whole revolution in the education sector to augment the new curriculum in the primary and secondary schools.”

And teach and lead by example he did.

The man was a successful farmer, especially of soya bean, his specialty.

What can I say about this great man because there are just no words to describe this gentle giant.

There is a saying that when an African elder passes on, it is akin to a whole library burning down.

Fortunately in Professor Mpepereki’s case, the library remains open with all its wisdom available to current and future generations.

I dare say though he had a grand vision yet to come to fruition, he passed on an empty husk, he did not bury his talents into the ground, he gave his all.

A very busy man he was, yet he found time to put his wisdom and ideas into words that will forever remain with us and will be useful to those who love this country and want to see it develop to its fullest potential.

I for one do not regret pushing him and harassing him for an article every week for The Patriot he so much loved and considered an important tool for educating Zimbabweans.

To quote him at length, he once wrote:

“The educated should be having an impact on the country’s development processes.

African universities must be re-configured to become primary workshops for researching and finding solutions to African social and economic challenges and not extensions of colonial institutions enjoying an ivory tower status. The new slogan in universities and schools should be: ‘There are no academic subjects; all subjects are practical, to develop skills to solve challenges of life’!

As Africans, we must reclaim our identity and take charge of our own destiny!

We owe it to our founding fathers and to our future generations!”

The good professor wished all Zimbabweans to excel and make inroads in all fields and reach the advanced levels of so-called developed nations as he noted:

“The passion which inspires an individual to serve, to show loyal and often zealous support for one’s country also is evidence of patriotism.

The truth is that not all academics are looking for a job in Government; most are well-meaning citizens ready to make their contributions to the country’s development. By failing to engage and put to work our large pool of intellectuals, Zimbabwe has lost out on the huge investments made by villagers selling peanuts to send their children to school!

We have lost out on the millions Government has invested through funding the education system and providing scholarship for thousands to attend local and foreign academic institutions.”

It hurt him to see trivia dominating major concerns and the negative overwhelming the positive.

Faced with challenges wrought by sanctions, Professor Mpepereki and colleagues that include Dr Tafataona Mahoso and the late Dr Vimbai Gukwe Chivaura took it upon themselves to educate the nation about the root causes of sanctions and what it meant to be Zimbabwean.

They ‘risked’ their academic careers by choosing the motherland that was being bombarded by Western nations, unmasking the hypocrisy of the West.

Even when some in our midst saw them as a ‘band of lunatics’, they did not tire telling the Zimbabwean story.

Professor Mpepereki was also very strong and resolute on the cultural front and did not mince his words, especially on African Traditional Religion (ATR) which he strongly believed in.

In one of his many articles, he wrote: “A people without culture are akin to a ship without a rudder, floating on the open sea.
Such a ship can be blown in any direction by prevailing winds. The implications are frightening.

A rudderless ship is open to plunder by pirates prowling the open seas.
Such is African society after colonisation and conversion to foreign Western Christian values.

Through systematic cultural deconstruction and stigmatisation, the fabric that holds African societies together has been destroyed.

Africans have been induced by hook, crook and sheer brute force to abandon their cultures and religion; their tried and tested sustainable ways of life.

They are now rudderless ships with no home-grown norms and values.”

And a spade he called a spade.

Clearly, he spoke his truth without equivocating: “Since the arrival of Western missionaries, Africans have been largely disconnected and alienated from their ancestral spirits and from God, Musikavanhu.

The daily prayer meetings, church services and revival crusades prevent people from settling down to re-examine their circumstances and re-establish contact with their social and spiritual world.
They refer to this perpetual state of social, spiritual and cultural agitation as ‘chirungu’, which literally translates as ‘the ways of the white people’.

As a result, Africans have been forced to abandon their cultural and religious rituals and ceremonies which ensured they lived in harmony with their neighbours and natural environment.

The white missionaries cleverly substituted the African God, Musikavanhu, with the white God whose teachings were said to be in the Bible, which Bible most Africans could not read.

They had to rely on the preacher’s biased interpretation of Bible verses to further the cause of colonisation.

Once the unsuspecting Africans erroneously believed that the God of the whiteman’s Bible was the same as their own Musikavanhu, they were ripe for religious and cultural slaughter.

They abandoned their religious and cultural rituals and ceremonies in exchange for so-called Christian teachings.

As a people, they became a rudderless ship in stormy waters.”

Diligently, the good professor worked seeking no personal glory but just to serve as he would write:

“Most academics are professionals who want to do the work that they were trained to do.

Today the Office of the President and Cabinet are seized with leading efforts to turn around the economy.

They should deliberately head-hunt those academics in our state universities and elsewhere who have specific expertise and engage them to find solutions to our many challenges.

This should not be an optional exercise.

It is time the people of Zimbabwe harvest dividends from their investment in intellectual development.

Engineering faculties must be actively engaged to work on our roads, even as part of larger consortia.

Faculties of Agriculture, Veterinary Sciences and Medicine must deliberately engage with relevant stakeholders in addressing the challenges pertaining to their areas of expertise.

Many projects have been undertaken with donor funding.

They have not been sustained beyond the short project life as donors tend to shift from one thing to another, never allowing working technologies to be integrated into mainstream economy so as to have long-term impact.
The University of Zimbabwe-led Soyabean Promotion Project, supported by Government through the Reserve Bank of Zimbabwe and undertaken in collaboration with AGRITEX, Department of Research and Specialist Services and private sector companies is an example of a successful project that was tried and tested with farmers in many areas of Zimbabwe.

Academics should approach Government and private sector companies with ideas.

Our local industry has little culture or appetite to work with university researchers, a common practice in developed countries. So we must deliberately engage them.

It takes two to tango!”

Professor Mpepereki appreciated that our most precious assert and key to future success was the youth and always had a word of advice for them hence his desire to impart practical education.

He hated the imitation of our former conquerors mottos, creed, style and customs.

“It is time Africa digs deep into its rich history and experiences to identify and take advantage of indigenous technologies (practices) that have stood the test of time,” he said.

“Europe and America are spending millions to research African indigenous knowledge so as to use the African wisdom to compliment their own technologies!”

Who says there is no good to come out of Africa? challenged Prof Mpepereki.

And the challenge still stands.

Professor Sheunesu Mpepereki I do not bid you farewell.

You are still very much with us.