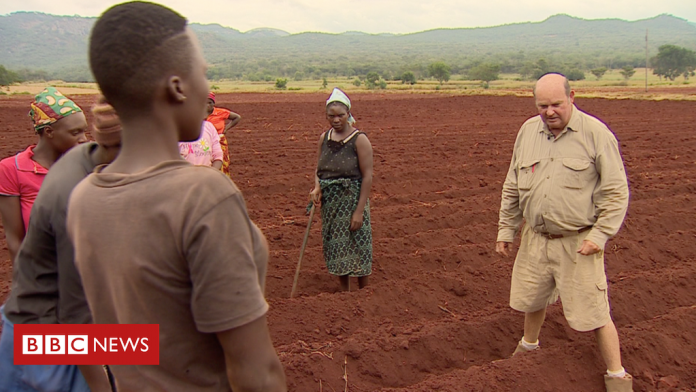 WORK records from the officers in charge of resettlement in Sanyati revealed a preoccupation with the practical pressures of getting boreholes drilled and roads, dip tanks and administrative housing constructed but with ambiguity in the description of how some of the work was carried out, as is evident in the following monthly report submitted by the Land Development Officer for January 1951:

“Surface erosion this season has convinced the majority of natives that contour ridges are an asset and a necessity. Many constructed ridges following the first heavy downpour of rain but unfortunately, they were of a temporary nature and of insufficient strength to withstand subsequent heavy rains … Kraalheads are at present organizing to repair village roads… Dipping is again in operation coupled with a count of all stock in preparation for destocking”.

Most of the ‘immigrants’ recalled doing ‘chibaro’ or forced labour building roads in the months after settlement, although this is only indirectly suggested in correspondence and reports left by government administrators.

The idea that Africans had, in fact, been persuaded to take on conservation and development tasks willingly persisted, despite evidence that resistance was prevalent.

One Land Development Officer’s (LDO’s) report to his superior indicates the desperate effort made to convince the Rhodesdale evictees of the virtues of these measures:  “At … farmers meetings an effort was made to show how, by preserving grass, we can improve the quality of our rainfall, but by burning and overgrazing the veld, we encourage hail, floods, and erratic conditions.

Furthermore, how, by unbalancing nature through the ruthless destruction of indigenous life, such as birds and game, we encourage the tick and insect life which destroys our cattle and crops.

Yet, he goes on to report that, in meetings with chiefs solutions were being sought to the problems of cattle trespassing in agricultural areas during the summer growing season and, rather more ominously, to people destroying conservation works, roads, etc’.”

However, the environment under which conservation measures were enforced was fraught with radical tendencies among the local peasants who bore the brunt of these stipulations whose rationale they openly or surreptitiously questioned; hence, conservationist education was not voluntarily embraced.

In fact, resistance against the payment of exorbitant dipping fees, destocking, contouring and other unpopular conservation measures was in evidence everywhere in the rural Sanyati area at the time.

The residents of Sanyati bore the full brunt of the National Land Husbandry Act (NLHA) as victims of both the forced displacement and the forced labour that it implied.

They also quickly demonstrated just how unfeasible the idea of creating full-time yeoman farmers in an arid ‘reserve’ on severely restricted land base area was.

Virtually every family settled in the area subsequently had to combine farming with a wide range of wage-work (largely by men) and informal marketing (mainly by women), both locally and in such towns as Gatooma (Kadoma) and Que Que (Kwekwe).

The standard of living was higher for most labour migrants because their source of revenue was usually constant compared to the rural areas where it was seasonal.

In 1963, the arrival of the Baptist Mission and its associated school and hospital was witnessed in the area.

Education was avidly sought as a means of obtaining employment credentials.

The establishment of a state-run irrigation scheme in the late 1960s (Gowe), and of a cotton ginnery and the associated ‘growth point’ for small businesses after 1976, increased opportunities for local employment, albeit at low wages.

Yet, nobody, save the very poorest (particularly widows and divorced women) who had no other choice, attempted to emulate the happy ideal of the immobile, self-sufficient farmer offered up by development rhetoric.

Poverty, on the part of women in general, however, could not halt the emergence of differentiation as some of them continued to strive to improve their economic condition and became relatively better off than others.

Clearly, the future erroneously envisioned for peasants by the NLHA did not materialise for the people of the area.

In accordance with the NLHA provisions, existing homesteads were moved into ‘lines’ (maraini) along the first roads that were constructed in 1947; three years before the first ‘new immigrants’ or Rhodesdale evictees were forcefully settled there.

The clearance and cultivation of riverbanks was forbidden; a law that was still being enforced half a century later, although this was regularly breached; while the mission school and hospital actively sought to inculcate and enforce ideals of health, dress and hygiene among clients of both.

The education provided by the Baptist school was to differentiate Sanyati peasants in a big way.  For instance, a sizeable number of Baptist Mission-educated Africans, who later became demonstrators, trained at Domboshawa and Tjolotjo Agricultural Training Institutes; and those who found work outside the ‘reserve’ were behind the remittances that flowed or trickled back into the rural agriculture production of the area.