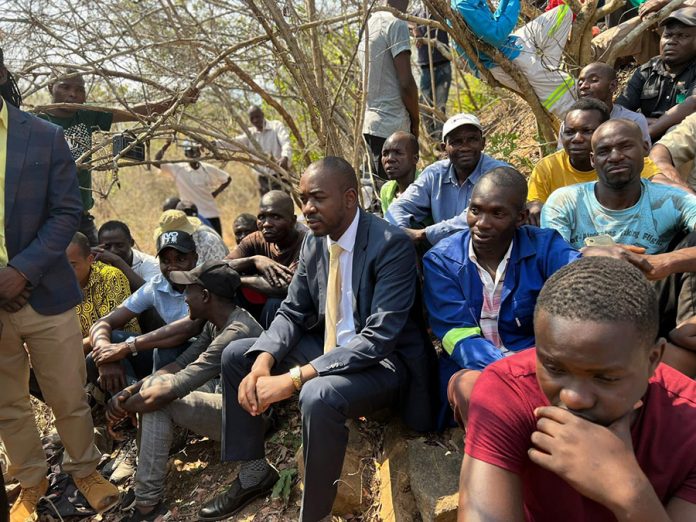 THE so-called champions of democracy and ‘human rights’, the Citizens Coalition for Change (CCC), is seemingly failing on the fair practices front resulting in factionalism which has sent the Western-backed party into a tailspin.

Factionalism is rife in the ailing opposition CCC.

It has emerged that a new faction, the Elite Maruva, has been formed citing displeasure over party president Nelson Chamisa whom they feel is running the CCC camp with an iron fist — a departure from the ‘ideals’ the former MDC T stood for.

It has become a war of the Elite Maruvas and the Chamisa camp.

The so-called Elite camp has since coined the slogan: #Kutsungamberi, which means they stand with one Anorld Tsunga.

We have written about Tsunga in the past. He is the resident director of the National Democratic Institute (NDI), a regime change outfit pushing Western interests.

Tsunga is the former opposition MP for Dangamvura, Mutare. He is also a lawyer and has allegedly fallen out of CCC leader Chamisa’s favour, who believes he is supporting Biti’s faction to take over the party.

Currently, Tsunga is the holder of the ‘bag’, as he is the conduit of funding for the opposition and CSOs, the one presently trusted by the Western handlers.

He, therefore, gets to decide who receives funding and who doesn’t.

And according to him, Chamisa is undeserving; but of course that does not deter Chamisa who has since countered with the #GoFundMe platform, in the process fleecing thousands of unsuspecting Diasporans of their hard-earned money.

Now back to the ‘golden boy’.

Chamisa’s candidature in the then MDC Alliance was pushed by what was called the ‘generational consensus’. It was spearheaded by the likes of Sithabile Dewa when she was at Heal Zimbabwe Trust, Pride Mukono, Ostallos Siziba and Makomberero Haruzivishe, among others.

These were former ZINASU members who wanted to run with a younger candidate, making Chamisa the perfect choice.

When the MDC was formally launched in 1999, ZINASU was a major component of the regime change party.

ZINASU has always been a major training ground for opposition and resistance politics which has grown into a pillar of the regime change agenda.

When Chamisa snatched the presidency, he turned out to be cunning. He used the ‘divide and rule’ tactic and took some of those he believed to be loyalists into his inner circle. He chose the likes of Siziba and left the others as political debris.

Those left in the cold found solace in Biti.  There were those who came to the opposition from ZINASU and went straight to the youth assembly while others went straight to civil society organisations (CSOs).

Those in the CSOs are also faithful supporters of the Elite Maruva faction.

Their head office is at Ibo Mandaza’s offices at the SAPES Trust.

It appears Chamisa only took the ones he considered learned. Those who didn’t go to university seem to have no position in Chamisa’s party, with the likes of Fadzayi Mahere earning a position because of her being a university lecturer.

That is why people like Luke Tamborenyoka, once MDC-T presidential spokesperson, found themselves with no spot in the party.

It is a party of lawyers and advocates who, ironically, have failed, with all their combined expertise, to get Sikhala and his counterparts out of incarceration.

This is where it gets very interesting.

Sikhala, a few days ago, wrote a letter from his prison hub romanticising his sympathisers. Paragraph after paragraph he thanked those who he believed to be his strongest supporters. Even the talkative Themba Mliswa, the notorious Godfrey Tsenengamu, the Diaspora community, his lawyers and journalist Hopewell Chin’ono, were all part of this viral letter.

Notable, however, is the absence of Chamisa’s name from the beneficiary list of Sikhala’s largesse.

It is believed Sikhala and his friend have joined the Elite Mruva out of their disappointment with Chamisa, who they feel has not put enough effort to get them out of jail.

They feel Chamisa has become a law unto himself.

Sources within the party say Chamisa has gone to the extent of insisting that he will sign the nomination papers for every candidate in CCC for the 2023 elections himself.

In the 2018 elections Chamisa was accused of imposing candidates of his choice much to the chagrin of some opposition supporters.

Already a list with candidates Chamisa intends to impose was leaked to other party members who are itching for a confrontation if and when he chooses to announce the names.

In an article by one of the Elite Maruva, Alfred Mavedzenge, titled ‘Critical Reflections on Nelson Chamisa’s leadership style and approach’, he wrote: “Chamisa managing CCC is a matter of public concern and public interest. Chamisa might have now become the albatross hanging around the pro-democracy movement, and a potential stumbling block against progress towards the attainment of a genuine democratic change yearned for by many in Zimbabwe.

Chamisa is still running the CCC without any formal structures and without a constitution. The party is financially broke and does not have an organisationally driven fundraising strategy (the Americans will not fund something they feel is a lost cause).

There are no formally recognised national leadership positions, except his role as the president of CCC and those he has appointed into positions such as the party spokesperson and other functionaries.

He holds meetings with his lieutenants only when he wants. He makes party decisions without consulting anyone outside of his inner circle.”

Mavedzenge further pointed out that the opposition had failed to mount a robust voter registration exercise.

They are many potential voters who have simply not registered to vote. We all know Chamisa will simply declare that he has been cheated when he loses the elections come 2023.

Because of such sentiments, Mavedzenge was accused by Chamisa loyalists of trying to prop up certain individuals within CCC who felt sidelined.

It is reported that Chamisa, after reading Mavedzenge’s article, sent him a message telling him he was being “…abusive, God bless you.”

In response, Mavedzenge called him a dictator and weak leader, “…who has no vision, beyond quoting self-serving scriptures and running the risk of profaning the Holy name of God.”

The Elite Maruva argue that Chamisa is moving around blindly and those supporting him are also doing so blindly.